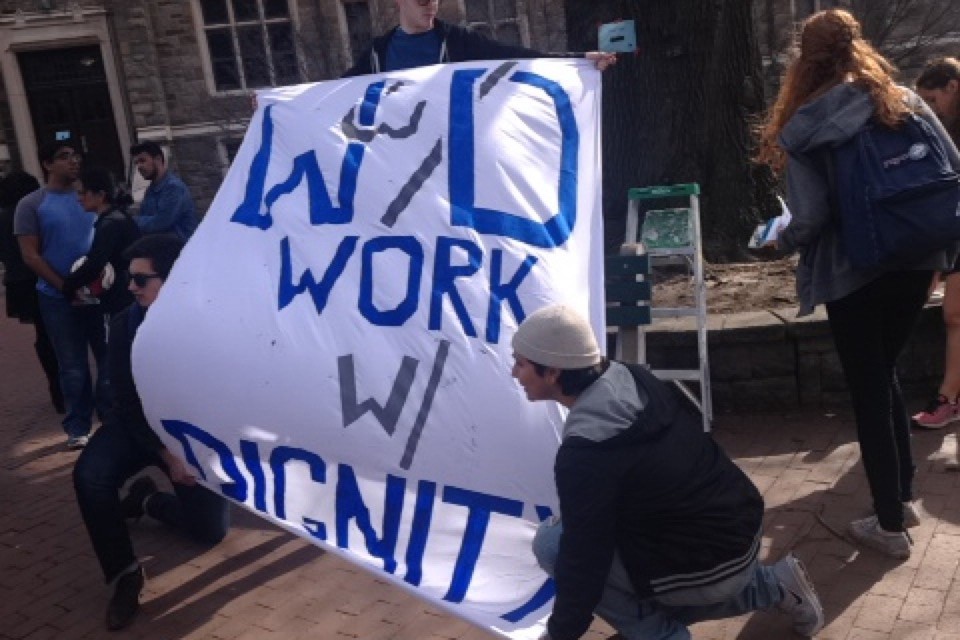 On Oct. 14, undergraduates members of Georgetown Solidarity Committee (GSC), as well as several Georgetown University Law students, protested after being denied access to deliver a petition in support of workers to the bargaining committee at the negotiations between the university and SEIU Local 1199, a union that represents campus maintenance and facilities workers.

At least six GSC members and law students chanted outside of the Hotung building at the Law Center through the course of the proceeding. During a break in the negotiations, university human resources representatives Roberta Paul and Brendan Malone met with students outside of the building, offering to accept the petition and present it to the negotiating parties on the students’ behalf.

This offer was declined by students. “We wanted to make a statement to the workers as well that the students are in solidarity with them,” GSC member Mizraim Belman Guerrero (SFS ’20) said.

GSC members Sophie Bauerschmidt Sweeney (COL ‘17) and Esmeralda Huerta (SFS ‘17), were eventually permitted into the building, but not into the negotiation room as observers or participants, unable to deliver their petition. Eventually joined by Belman Guerrero during an hour and a half recess, the three began chanting outside of the negotiation room. They were promptly escorted out of the building, unable to deliver their petition. Law Center security took down their university information for disciplinary action and were threatened with arrest were they were to return, according to Bauerschmidt Sweeney.

Disruptions of Georgetown University events, such as these negotiations, are a violation of the Student Code of Conduct. According to the university, the negotiations are in a two-party format, with a neutral mediator who cannot participate if there is student interference as a third-party. Members of GSC were previously denied access to observe negotiations in Sept.

After GSC members were removed from the building by Law Center security, negotiations continued, but to no conclusion. According to a Georgetown Main-Campus facilities and maintenance worker, who asked that his name be withheld for fear of retaliation, no progress at all was made on Oct. 14.

“At the table they had nothing, they had nothing for us. Nothing to propose or anything. What they did was they rescheduled the meeting for two weeks from now and they’re going to bring in a proposal in for us,” the employee said. “They haven’t budged at all. So it wasn’t a day where we looked over proposals.” According to the employee and members of GSC, the union and the university are negotiating a percent raise per year for the next three years. Discussion of the raise has ranged from 2 to 6 percent.

The negotiations were originally supposed to take place at McShain Large, a room located on the Main Campus. According to Belman Guerrero, the location was changed by the university on Thursday, stating that the room had been already booked for that time. The proceedings were relocated to the Hotung building at the university’s Law Center, located in central Washington, D.C.

According Bauerschmidt Sweeney, students received no notification about the location change from the university, depending on the workers involved in the meetings to inform them. “Just the lengths [the university is] willing to go to to avoid listening to what the Georgetown community actually wants out of these negotiations is pretty appalling to me.” Bauerschmidt Sweeney said.

No changes have been made in the negotiations, a process that has been ongoing for the past five months. According to Bauerschmidt Sweeney, GSC hopes to deliver their petition at a later date, as the facilities and maintenance workers have developed a petition of their own. Huerta, Belman Guerrero, and Bauerschmidt Sweeney still await any notice of disciplinary action.