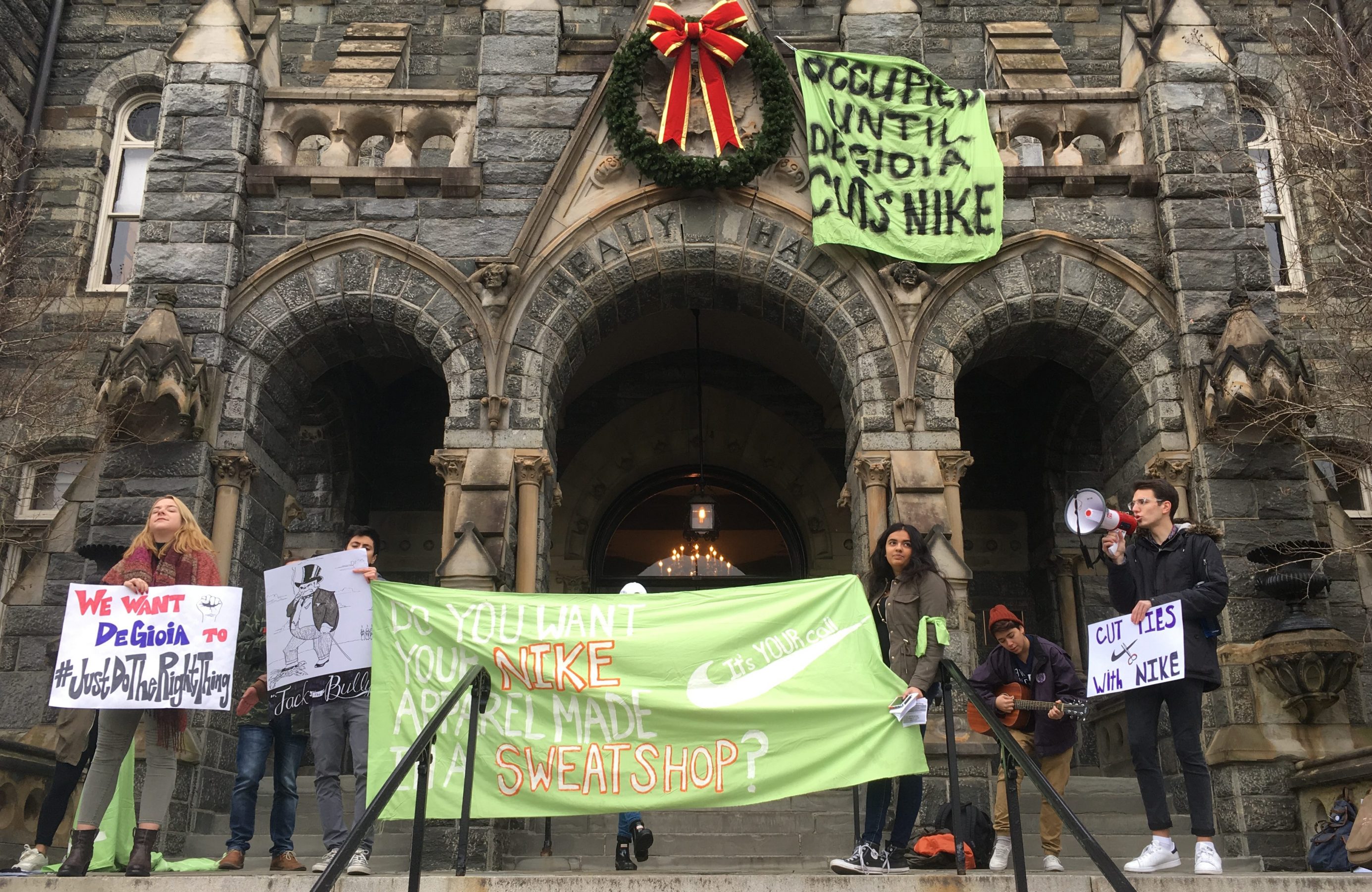 Yesterday at 10 a.m., 17 Georgetown undergrads stormed into the office suite of President John DeGioia in Healy Hall to protest the university’s involvement with Nike in a sit-in. The students have vowed to sit-in until the university issues a written statement that it will not renew its licensing contract with Nike, which is set to expire Dec. 31. Nike is the only licensee of Georgetown that has not signed the university’s Licensee Code of Conduct and protesters are specifically concerned over labor practices in Nike’s factories.

Over thirty students sat in support of the protest outside in the foyer of DeGioia’s office. The 17 students inside DeGioia’s office hung a banner from the balcony overlooking Healy Circle which read “Occupied Until DeGioia Cuts Nike.” After being threatened with university sanctions, which affect the ability to participate in certain activities and study abroad, nine of the original 17 students left the office. Another left this morning because of illness. The seven that remain today stayed overnight in the office, accompanied by a GUPD officer. The university allowed Healy Hall to remain open overnight, although it customarily closes at 2 a.m. University administrators have said that they are negotiating with Nike to secure unlimited independent monitoring access to their factories in Vietnam, but do not feel ready to end the licensing contract.

The demands of the sit-in students are two-pronged to match the two contracts – one for licensing, the other for sponsorship – that the university has with Nike. The licensing contract, which is set to expire on Dec. 31, means that Nike can produce and sell apparel featuring Georgetown logos and trademarks. The sponsorship contract makes Nike the exclusive apparel provider for Georgetown Athletics. The protesting students ask that the university end their licensing contract with Nike, and additionally that they add language to the sponsorship contract to commit Nike to allowing free access to their Vietnam factory for the Workers’ Rights Consortium (WRC), an independent monitoring group for labor practices.

The WRC has been investigating Nike’s Hansae factory in Ho Chi Minh City, Vietnam since October 2015, but Nike has not facilitated direct WRC access to the facility during the investigation. Using off-site interviews with employees, the WRC was able to release a report on May 6 detailing local labor law and university Licensee Code of Conduct violations at the factory. The group was granted access to visit the facility this summer in a tandem visit with the Fair Labor Association (FLA), a group that student activists characterized as an industry-sponsored monitoring group.

The WRC released a report Dec. 6 confirming many of the same labor issues at the factory that they discussed in May. Nike has not yet made a public commitment to allow random, unsupervised WRC visits in the future. “The whole point is that these groups should be able to do random inspections because if they don’t do random inspections it’s harder to find the labor abuses,” said Vincent DeLaurentis (COL ‘17), a student protester who has been sitting in the office foyer.

Protesters expressed that while WRC access would be a victory, ending the licensing contract is the final goal. “It’s too late,” said Sophie Bauerschmidt Sweeney (COL ‘17), a protester, on the phone from within DeGioia’s office. “Nike has had too many violations at this point and it’s not a time for forgiveness or giving them a second chance.”

University administrators have said that they believe gaining WRC access to the factory while renewing the licensing contract is what would be best for workers. “We are continuing to work with Nike to get an agreement where the Workers’ Rights Consortium has access to plants to do inspections and investigations and to give complaints and to be able to issue independent reports,” Joe Ferrara, DeGioia’s Chief of Staff, told protesters last night in the foyer around 8 p.m. “We can get to an agreement where we can have WRC access. That is what’s best for workers.”

University spokesperson Rachel Pugh responded to the sit-ins and the WRC report in a university statement. “The report issued on December 6 by the The Worker Rights Consortium (WRC) regarding the Hansae factory in Vietnam is deeply troubling, and underlines the importance of the WRC and independent monitoring,” Pugh wrote in an email to the Voice. “Nike has committed to extensive remediation with the WRC, Fair Labor Association (FLA) and Hansae management and they have initiated sanctions against the factory. We believe the best way to address the concerns in the reports and to improve the conditions of workers is by working together with Nike. We are working to reach agreement with Nike on terms that ensure timely, independent factory monitoring by the WRC to address complaints in the future as a condition of our licensing contract moving forward.”

Protesters reacted negatively to the university response. “You’re telling me that you have not reached an agreement yet to allow the WRC access and you’re not going to cut the contract. So we’re exactly back where we started,” said DeLaurentis in response to Ferrara’s statement to the protesters.

Dan Zager (COL ‘18) who was part of the office sit-in until sanctions were being delivered, did not think the university was being realistic about their abilities. “The university has zero leverage in this deal. Nike is a multi-billion dollar company and this contract is pennies on the dollar for them,” Zager said. He noted that the university has said they are negotiating with Nike for 14 months, and that movement in the next three weeks would be unexpected. “I almost have to respect that kind of optimism or naivety,” he said.

According to the December WRC report, Nike has acknowledged the labor violations at Hansae and has worked with the facility to produce a corrective action plan. Although the remedies outlined initially in the plan would not bring the factory up to university Code of Conduct standards, Nike has committed to the WRC to take on additional remedies, which the FLA has endorsed.

Nike representatives responded to accusations by underscoring a commitment to transparency. “We established a Code of Conduct in 1992, were the first in our industry to disclose our supply chain locations to drive collaboration and transparency, and have led in establishing a consistent process for independent third party investigations across our 665 contract factory suppliers,” Sabrina Oei, a global communications employee for Nike wrote in an email to the Voice.

Oei explained that Nike has encouraged partnership between the FLA and the WRC, but sees a conflict of interest within the WRC’s goals. “We respect the Worker Rights Consortium’s (WRC) commitment to workers’ rights while recognizing that the WRC was co-created by United Students Against Sweatshops, a campaigning organization that does not represent the multi-stakeholder approach that we believe provides valuable, long-lasting change,” Oei wrote. “We value the role of campaigning bodies; however, we believe there are inherent conflicts of interest between campaigning and auditing.”

Additionally, Oei highlighted the limited production of university apparel at the Hansae plant in Vietnam. “[I]n July, the FLA completed a comprehensive audit of the entire Hansae manufacturing facility, which includes 12 factory buildings across more than 30 brands,” she wrote. “Nike manufacturing occurred in two buildings and, at the time represented approximately 9% of factory production.”

Georgetown’s Licensing and Oversight Committee (LOC), which exists to provide guidance to the administration on use of the university brand, met yesterday to discuss the December report from the WRC. Two members of the sit-in who are also members of the LOC, Isabelle Teare (COL ‘18) and Lily Ryan (COL ‘18) were told they could leave the sit-in for the LOC meeting and return to the protest afterwards. The two chose to remain in the office and the LOC did not allow them to call in to the meeting.

Ryan said administrators and leaders of the committee have given them no information as to what was discussed at the meeting.

“Thus far we’ve been left entirely in the dark,” she said.

Georgetown established the LOC, which includes students, faculty and staff, in 2000. The group has played a critical role in determining the university’s relationships with licensees. In 2009 the LOC decided not to renew Russell Athletic’s contract because of concerns around Russell’s labor practices.

In 2012, the LOC recommended the university drop Adidas due to its violation of the Licensee Code of Conduct.

The LOC has been working with administrators on the Nike contract, but has not released information about these proceedings.

In addition to the sit-in yesterday, students in the Georgetown Solidarity Committee also protested with chants on the steps of Healy Hall and held a rally of about 60 in Dahlgren Quad around 11:45 a.m. At the rally, before marching to the office foyer, students, faculty, and staff spoke on the importance of the protest and solidarity with Nike workers.

“Hear the prayers we make today for all women and men who are deprived of the fruit of their labors and find tears rather than joy in their work,” said Father Drew Christiansen as part of a prayer for workers. “We pray especially for the Nike workers in Vietnam who suffer exploitation at the hands of their employers. They are denied the dignity you have bestowed upon them.” 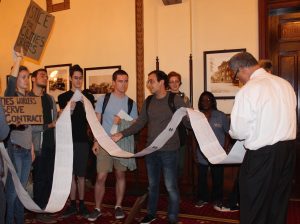