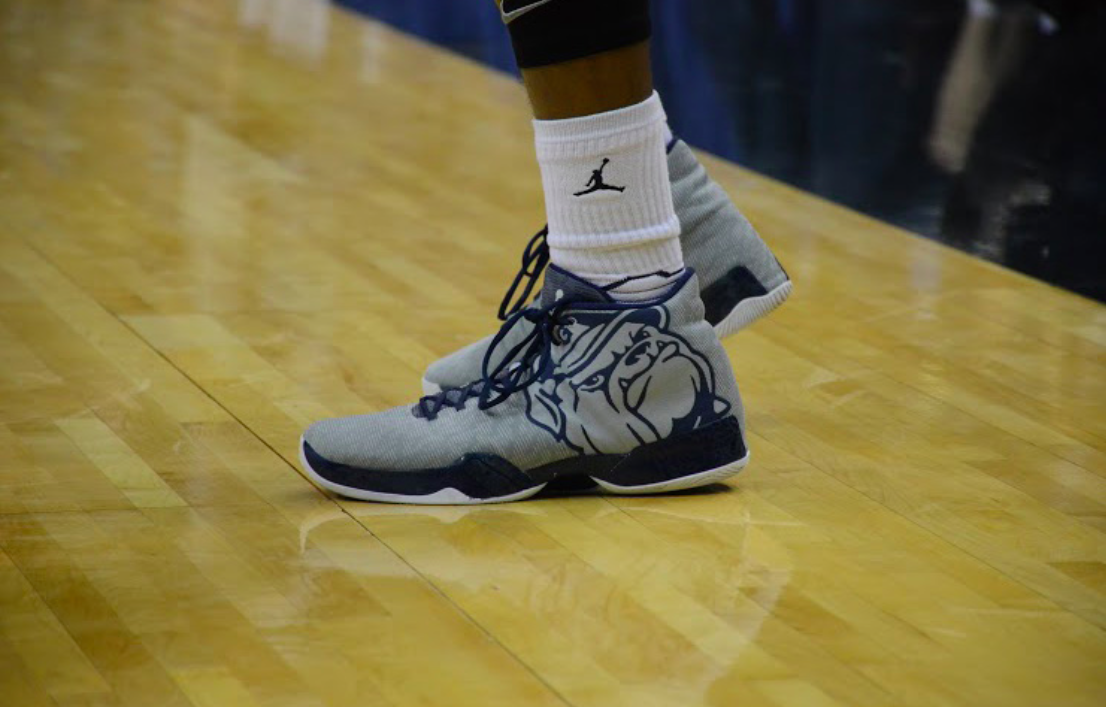 Gathered outside the empty office of President John DeGioia this past Friday, a group of around 50 students, athletes, and prospective parents sang as they demanded for Georgetown to cut its ties with Nike.

The event, called “Just Do It Already!” and organized by the Georgetown Solidarity Committee (GSC), was planned as a sarcastic “celebration” of DeGioia’s continuing dedication to worker’s rights, which GSC feels has been lacking, especially in regards to the university’s ties to Nike apparel.

The party involved singing, cake, and a version of Pin the Tail on the Donkey where students tried to tape slips of paper reading “Responsibility” onto a picture of DeGioia.

“We decided to throw a party. But it was maybe what you would call passive-aggressive in that we kind of just threw a party for a lack of action because the university’s been stalling so much,” said Isabelle Teare (COL ’18), a GSC member and a member of the Licensing and Oversight Committee, which advises the university on the use of its brand.

The university’s relationship with Nike dates back to the 1980s. The company is currently Georgetown Athletics’ exclusive apparel provider and the only university licensee that has not been forced to sign the university’s Code of Conduct for University Licensees. In fall 2015, Nike refused to allow the Workers’ Rights Consortium, an third party monitoring group, to observe their factory in Vietnam.

“Currently we license with Nike, who has a really long history with really violent labor violations in the factories it runs,” said Vincent DeLaurentis (SFS ’17), a GSC member. “We think that as a Jesuit university we shouldn’t be wearing apparel and tying our name to such kind of abhorrent labor practices.”

The event ended with a ribbon cutting meant to symbolize the students’ desired outcome: Georgetown’s cutting-of-ties with Nike. With Georgetown’s contract with Nike set to expire in December, there has been no public indication of the university intending to pressure Nike to sign its Code of Conduct, or of Georgetown exploring other suppliers to replace Nike.

“What I hope will happen is that Nike will sign our Code of Conduct and therefore agree to independent monitoring back in their factories [and] if they choose not to do that, then they no longer work for us, and that’s the bottom line,” said Teare. “The thing that we’re afraid of is since Georgetown claims to be in negotiations with Nike, we’re worried that all that’s going on is that Georgetown’s working to try and find a loophole in order to show Nike special treatment again.”

The university did respond to the demonstration: immediately after the act, the president’s chief of staff Joe Ferrara met with GSC members to discuss the matter in an impromptu meeting.

“I think it was a good first step,” said DeLaurentis. “I think it got the university on their toes a little bit, to see that many students and athletes and even some prospective parents showed up.”

Teare was glad to speak with an administrator who had the power to impact the issue, but was still skeptical of the university’s progress.“We want to see real progress, and if we don’t, we will continue doing actions. We will continue doing protests, sit-ins, whatever it is,” she said. “It won’t always be another party, you know? We will find other ways of getting our point across.”

An error in regards to Nike license has been corrected. Nike is the current exclusive apparel provider for Georgetown Athletics, not for the university as a whole.