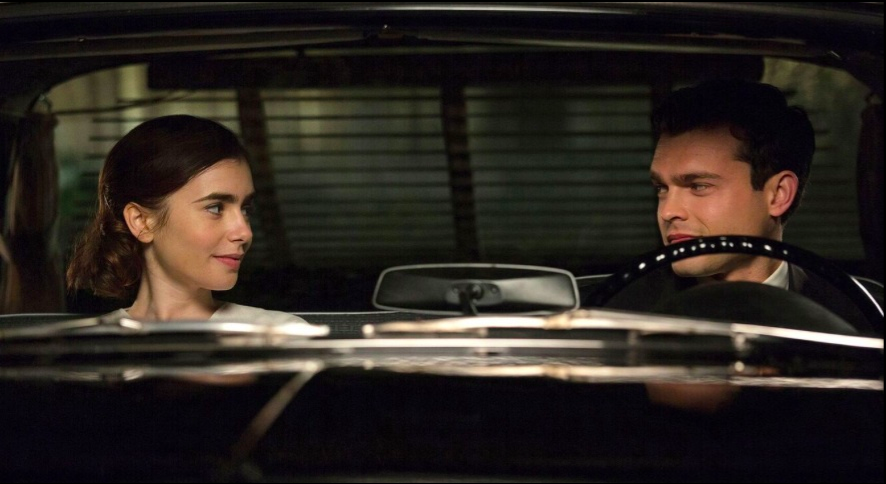 Billionaire Howard Hughes’ eccentricity was known to be legendary, stranger than fiction even, and capturing it on screen has led to mixed but mostly entertaining results. With the arrival of Warren Beatty’s Rules Don’t Apply, we have our most eccentric take on Hughes’ idiosyncrasy to date. Beatty has given us a confused but fun film, one that seems to contain within it several more complete ideas fighting for airtime in a distinct and frenzied manner.

The film takes place in 1950s and 1960s Hollywood, among other locales, tracking the relationship of young actress Marla Mabrey (Lily Collins) and one of her drivers, Frank (Alden Ehrenreich). The first several scenes bounce and cut with fragmented zest, setting viewers up for a film that never quite arrives. As Marla and Frank each try to meet and impress their boss, Hughes (Beatty), the billionaire’s rules for his employees undermine the pair’s budding romance. As the film progresses, Hughes’ descent into senility overtakes the old-school romance as the focus of the story.

Beatty has not acted in a film since 2001, and he has not directed since 1998. His charismatic has never faded, though signs of rust behind the camera are present. The first act of the film gives us a compelling romance, made all the better by the palpable chemistry between Collins and Ehrenreich, but its blip-short scenes quickly give way to the melancholy of Hughes and his wavering stability. I should stop before condemning the film for this unevenness. While at times frustrating, the non-traditional pacing and segmentation of the film’s acts do make for a unique viewing experience. We cannot simply regard the disjointedness as a flaw; Beatty seems to have matched the story’s discombobulation with the film’s itself. As the zany energy of the opening scenes stalls, so too do the ambitions and plans of Marla and Frank, who enter the story as naive Hollywood newcomers but become jaded at the whim of their unreliable boss.

This structure leaves the film in a tenuous position, often on the verge of derailing, but the talent of the cast never allows it to fall apart. Collins and Ehrenreich both seem destined for superstardom—their scenes leave a viewer wanting more of their story or a separate, Hughes-free film for them to share. Beatty fully commits to his vision of Hughes as a crumbling titan of a man, quirky and demented but vastly intelligent. His own minimalist writing at times diminishes his performance, though the silences and distracted conversations succeed in conveying the unfulfilling nature of Hughes’ descent.

The rest of the cast is filled to the brim with stars, though if you are not watching closely, you could easily miss one. Alec Baldwin, Steve Coogan, and Ed Harris pop in and out of the story without having the chance to make an impression; Annette Bening, Matthew Broderick, Candice Bergen, Martin Sheen, and Oliver Platt are afforded more time, but their characters do little more than react to Hughes’ unpredictable actions, and the consequences thereof. Once again, this might frustrate some viewers, but others will commend Beatty for casting convention aside in leaving his ensemble firmly on the periphery of his film.

What we are left with is a strange and pleasantly discomfiting movie, the product of Beatty’s decades-long interest in Hughes and his troubled final years. More attention could have, and should have, been paid to the young stars’ storyline, but perhaps Beatty recognized the easiness and lack of memorability that type of film would bring. Checking in at a little over two hours, Rules Don’t Apply does not have much room for addition. It is equal parts biopic and classic romance, a blend of The Aviators and La La Lands of the world. Because of that hybrid, discontinuous style, Beatty probably will not find himself raking in awards in the coming months. I imagine the fields being filled with more conventional (and, in some cases, far less entertaining) fare, though one can imagine Rules Don’t Apply making a run at shows like the Golden Globes that offer recognition in non-dramatic categories.

Most directors could not get Rules Don’t Apply made. But Beatty’s influence and achievements give him the freedom to be unconventional, to be a little weird, to forsake the rules. He uses his film to reflect on youth, ambition, and achievement from numerous perspectives. The end result of this was bound to be as jumbled as Hughes’ late-life brain. But Hughes also maintained some form of his genius, sharpness when the situation called for it. So too do Beatty and his work, taunting you with the confusion they induce before wowing you with their vision.