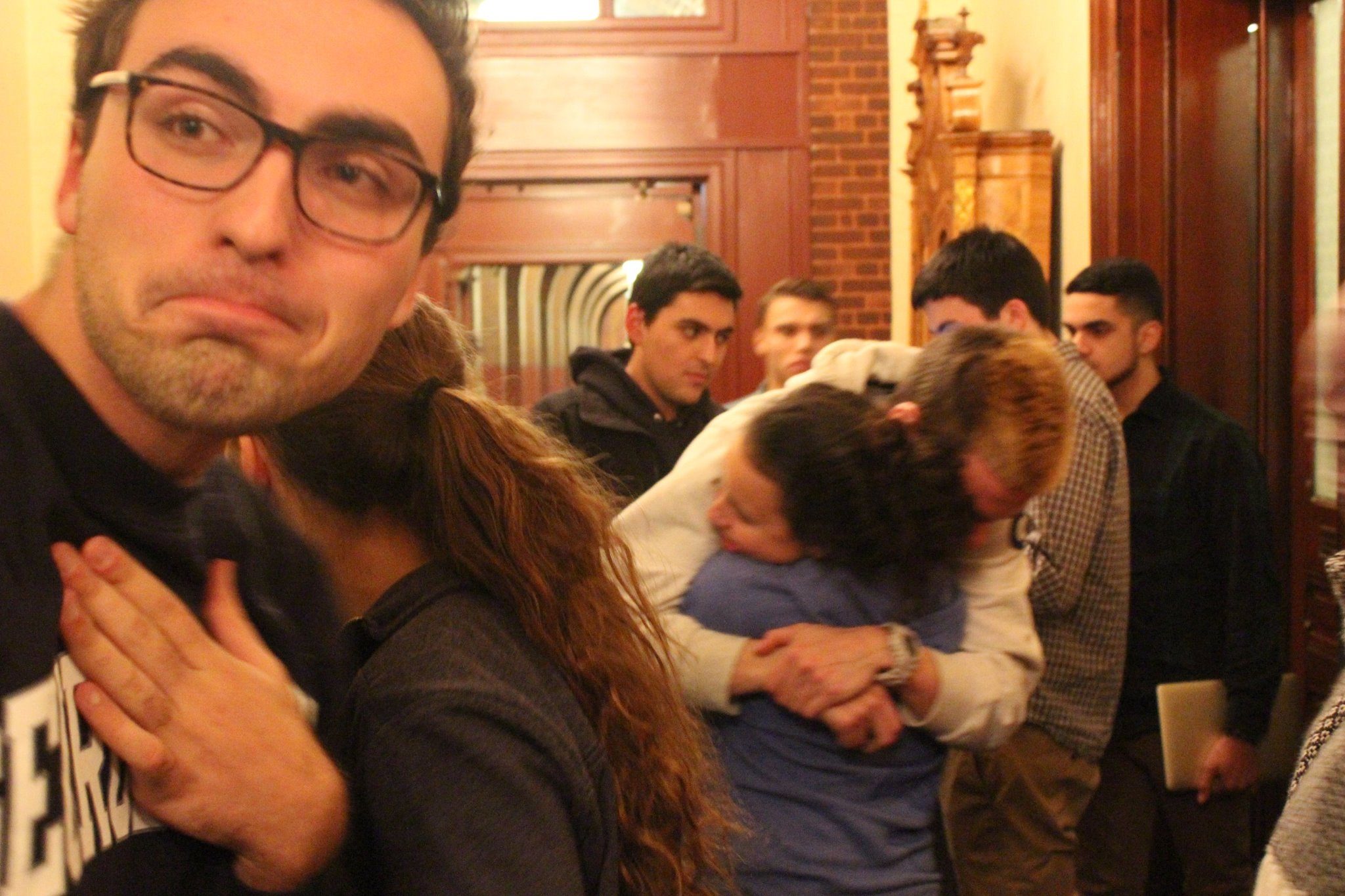 After a nearly 35-hour sit-in, student protesters and Georgetown reached an agreement Friday night that the university would not renew its contract licensing contract with Nike unless the company allows the third-party monitoring group the Worker Rights Consortium (WRC) independent access and reporting of complaints in Nike’s factories.

Seventeen members of the Georgetown Solidarity Committee (GSC) had occupied University President John DeGioia’s office since 10 a.m. Thursday in protest of the working conditions laborers face in Nike’s Hansae, Vietnam factory and demanded the university cut its licensing agreement with the apparel company.

At around 8:30 p.m. Friday, cheers erupted outside DeGioia’s office in the second-floor foyer of Healy Hall as GSC members announced that the agreement had been reached while their members inside ended the negotiations with DeGioia’s Chief of Staff Joe Ferrara and two professors, John Kline and Joseph A. McCartin, who acted as witness to the verbal agreement.

DeGioia plans to meet with GSC members and members of the university’s Licensing Oversight Committee before Dec. 14 to discuss Georgetown’s relationship with Nike, reaffirm the agreement students and administrators reached Friday, and discuss labor codes of conduct.

“Either Nike agrees to [the university’s demand]  and we win the national campaign, or they don’t and we win the Georgetown campaign of cutting the contract,” said Sophie Bauerschmidt Sweeney (COL ‘17), one of the students who occupied DeGioia’s office throughout the protest.

Ferrara said it was a good discussion with students and thanked Kline and McCartin for helping in the negotiation process toward the end of the protest.

In an email to the Voice, Nike spokesperson Sabrina Oei reiterated that Nike remains hopeful of reaching an agreement with Georgetown on its licensing contract.

On Dec. 6, the WRC released a report detailing some of the conditions in the Hansae factory, in part prompting the sit-in. According to the WRC, workers faced wage theft, verbal abuse, forced overtime, and a variety of health and safety violations, including more than 90 degree temperatures, toxic solvent sprays, and padlocked doors. Workers also faced a chronic problem of collapsing due to heat and overwork.

After the initial 17 students rushed into DeGioia’s office, the group hung a banner, which reads “Occupied Until DeGioia Cuts Nike,” from the office’s balcony that faces Healy Circle as eight students began chanting on the stair below outside Healy in support of their fellow GSC members. 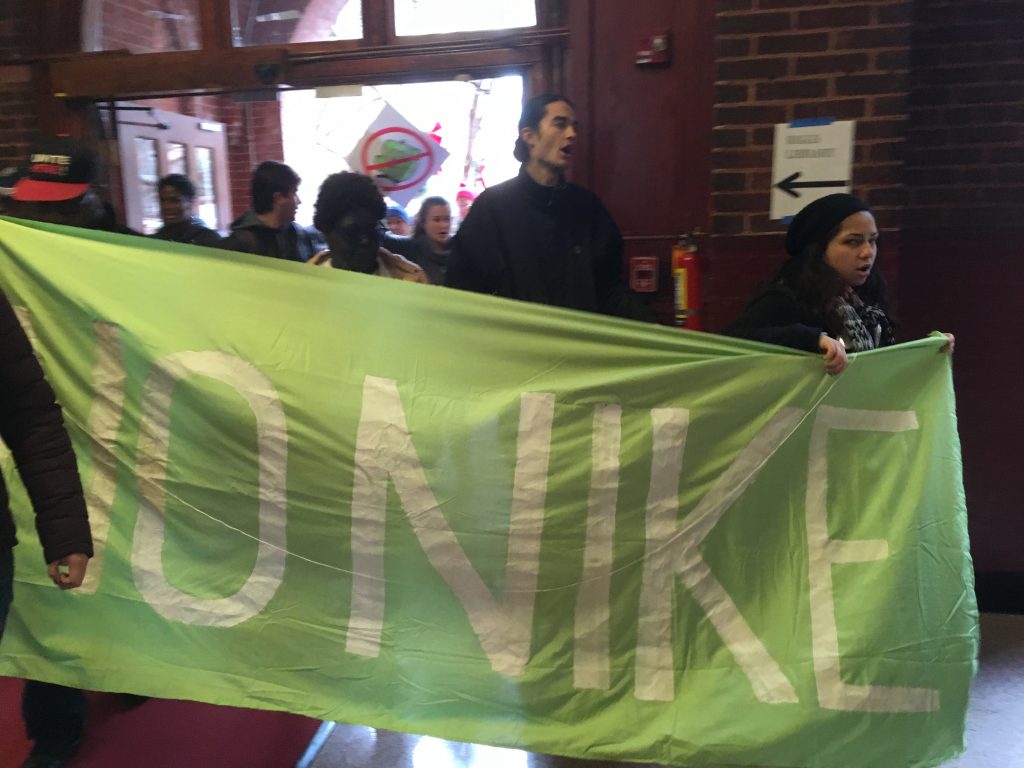 Students bring a banner from the rally in Dalhgren Quad to the President’s foyer. Photo: Lilah Burke

More than 50 students also joined in a sit-in in the foyer outside DeGioia’s office to protest Georgetown’s relationship with Nike after GSC held a rally in Dahlgren Quad on Thursday.

On the first day of the protest, nine students left DeGioia’s office just before 9 p.m. Thursday after administrators threatened them with student code of conduct sanctions. Eight remained inside overnight, willingingly accepting punishment, and continued their protest into a second day. With Healy closing at 2 a.m., the sit-in outside the office ended around 1:45 a.m. Friday, but students returned as early as 6:30 a.m. to support those inside.

Vice President for Student Affairs Todd Olson said he told the protesters occupying the office that they would be hearing from the Office of Student Conduct in the coming week. He said student conduct plans to review each case individually.

The group described their night as restless and cold in a Friday morning statement, and Isabelle Teare (COL ‘18), who had spent the night inside, left the office before 12 p.m. due to health concerns, GSC said in a statement.

At the beginning of the second day, Ferrara came in to meet with the students and reaffirm that the university was working to both keep the licensing contract and have Nike allow the WRC into its factories.

“I want to come in here and just tell you where we are. And I’m telling you the truth. It may be a frustrating truth. It may not be where you want us to be at this moment. And we are pushing hard, and I do believe we are having good serious conversations with Nike,” Ferrara told the students. GSC livestreamed the meeting on its Facebook page.

Seven students remained inside the office until the agreement was reached along with a GUPD officer who was present with them at all times. The students were allowed to leave to use the bathroom–they were often met with cheers each time they walked through the office’s opaque glass doors–but no one was allowed to bring in extra food and water.

“Some of the time they’ve been checking people’s pockets, things like that, when we come into the room to make sure we’re not bringing anything in,” Bauerschmidt Sweeney told the Voice in a phone call around 7:30 p.m. Friday. She and Vincent DeLaurentis (SFS ‘17) both said that Vice President for Public Affairs Erik Smulson told GUPD officers not to allow extra food and water into the room.

The students brought sandwiches, granola bars, water bottles, and extra supplies when they began the protest, but by Friday night, Bauerschmidt Sweeney said they were down to just two bottles of water and a few snacks.

Ferrara, Olson, and the students inside the office met around 5 p.m. with the door open to allow students outside to listen. At the time, Ferrara did not believe a resolution would come that day and said he was not sure whether the university would renew the contract if WRC access was not included. He said the university had gone back and forth with Nike over WRC access and that the contract would include independent monitoring and reporting  “in an ideal world.”

Joe Ferrara, Todd Olson, and student protesters meet around 5 p.m. on Friday with the door open so those outside can hear. Photo: Ryan Miller

Students pushed back against the idea that WRC access was an “ideal world” situation, and told Ferrara, who had expressed concerns about students’ health, that they were thinking of the Nike laborers.

“The absolute minimum condition for a continued license with Nike must be that the exceptional treatment is ended and Nike accepts the same contractual obligations to Georgetown’s Code that apply to every other licensee,” the letter read.

Discussions about Georgetown’s contract with Nike have been ongoing for 14 months in large part through the LOC, a body of students, professors, and administrators that provides guidance to the university’s leadership regarding trademark licensing policy to ensure its licensees keep with the university’s values.

The LOC met Thursday during the sit-in, and the two protesters, Ryan and Teare, who are also LOC members were not allowed to call into the meeting. Ryan and Teare were allowed to leave the office and return to attend the meeting in person, but Ryan said they were sitting in and that would defeat the purpose of the protest.

GSC members also expressed frustration with DeGioia, who they say has not attended a single LOC meeting about Nike in the 14 months. DeGioia never appeared at the protest and did not make a statement regarding the contract or the sit-in.

Georgetown’s current contract expires Dec. 31, and Georgetown has the largest Air Jordan, a Nike brand, contract with the company. Georgetown’s relationship with Nike dates back to the 1980s, and former men’s basketball Head Coach John Thompson, Jr. is a member of Nike’s board of directors.

Moving forward, Sonia Adjroud (SFS ‘20), one of the seven students who remained inside the office for the duration of the protest, said GSC must continue its work before the end of the contract.

“This is not the end,” Adjroud said. “There is definitely a lot of work ahead of us, and I really do that think we need to be looking towards next steps.”

Editor’s note: Read the Voice’s rolling coverage of the first and second days of the sit-in as well as its wrap-up after day one for fuller updates of how the protest unfolded.