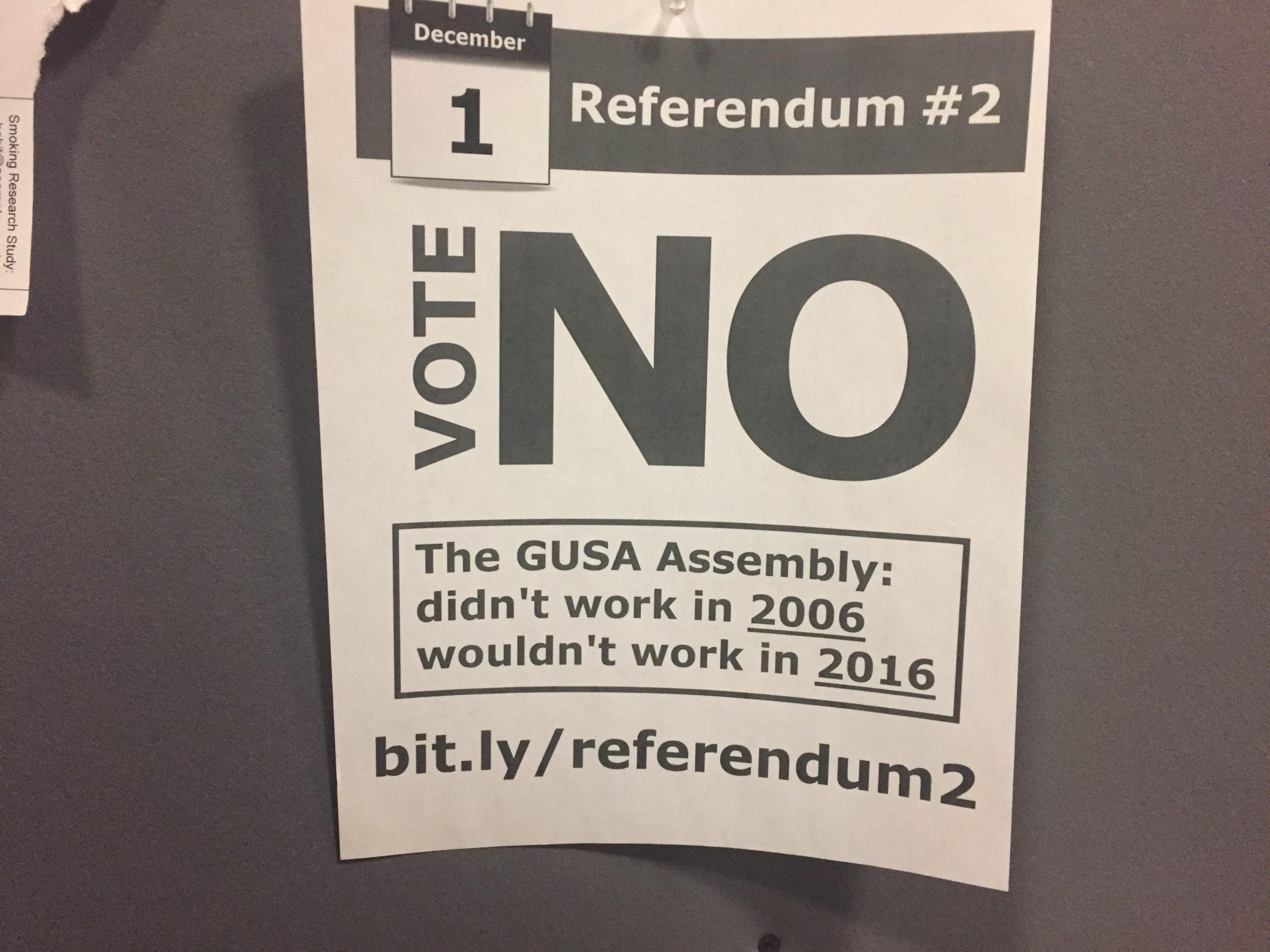 According to the  GUSA constitution, referendum questions must be announced to the undergraduate body at least 14 days, not including university holidays, before the vote in order to promote in-depth public discourse and full dissemination of information. GUSA did not release details of the ballot question (Question 2) to the public until less than two weeks before.

Question 2 proposed drastic structural changes to club funding practices and the modification of the GUSA Senate into the GUSA Assembly, a mix of both unelected advisory board members and elected class delegates. Both the GUSA executive and legislative branches had officially endorsed the reform, but individual members campaigned against it separately.

On Dec. 1, several hours before the polls closed, a petition was filed to the Constitutional Council, complaining of polling stations that were covered with “Vote Yes” signs and staffed exclusively by pro-referendum GUSA senators. The results of Question 2 were not released with the results of the smoke-free campus question. On Dec. 4, the council held a hearing where the complaintants made their case that alleged electioneering by GUSA may have swayed the results of the referendum. Jasmin Ouseph (SFS ‘19), a GUSA senator who campaigned against Question 2, said that she and the other students who originally filed the complaint are happy the results were invalidated.

“While [the 14-day stipulation] might seem like a technicality, I believe it is emblematic of other issues I had with this whole proposal – namely, it was rushed and forced upon students with little time or effort put into actually allowing students the opportunity to understand what it was they were being asked to vote on,” Ouseph wrote in an email to the Voice.

The council agreed with Ouseph and other complaintants that the “Vote Yes” signs and other incentives for voters at the GUSA-run polling stations were evidence of electioneering. Although the electioneering charge was a central component of the complaints’ case, because the GUSA constitution does not specifically prohibit those types of polling strategies for referendums it did not factor into the council’s decision. However, the Council wrote in their report that this type of coercive behavior was concerning to them.

“[W]ithout the passage of a Student Bill of Rights that protects the autonomy of the polling station, as well as other fundamental voting rights, democratic norms of governance are imperiled,” the report reads.

GUSA senate has not released plans to revisit Question 2, but it voted unanimously on Sunday to reform club funding practices through a change in their bylaws, rather than through the constitutional amendment proposed in the referendum.

Ben Baldwin (SFS ‘19), a GUSA senator who supported the original referendum, said that Sunday’s vote was to show the student body that the senate is still open to revising the structure of GUSA and club funding.

“The issues with [the Finance and Appropriate Committee (FinApp)] and the funding allocation process still remain, but I believe that changes to the bylaws, like the ones seen this past Sunday, go a long way to remedy those issues,” said Baldwin. “My hope is that these changes will [help build] strong ties between FinApp and the advisory boards and restore trust in the transparency and efficacy of the budget-making process.”