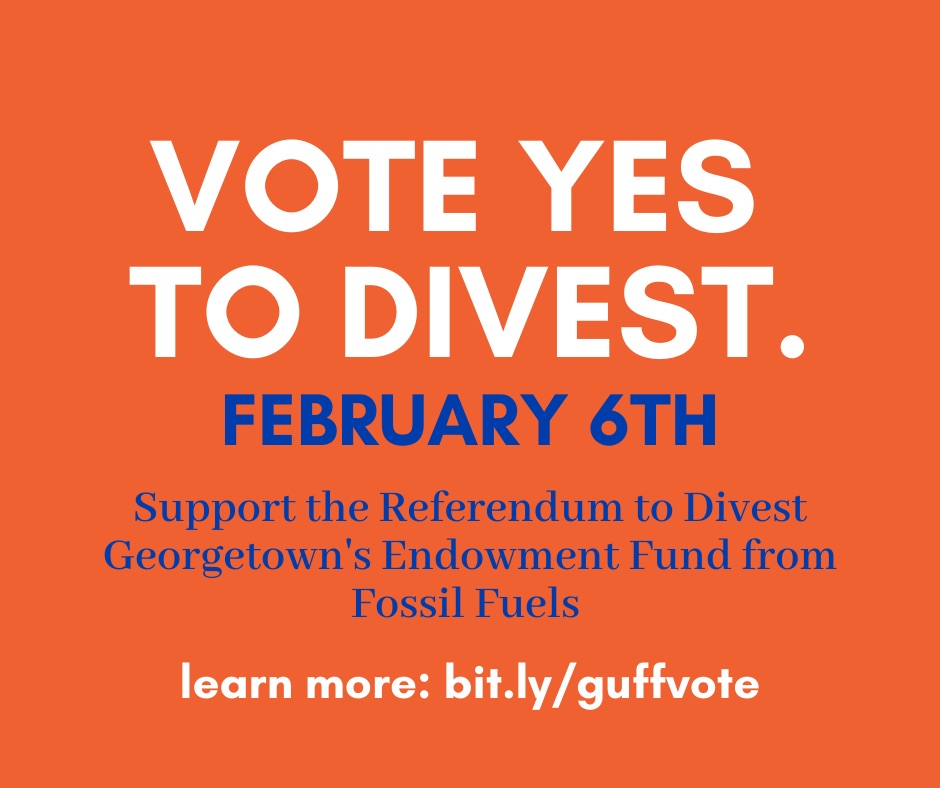 After seven years of advocating for Georgetown to divest from the fossil fuel industry, GU Fossil Free (GUFF) will hold a divestment referendum on Feb. 6 alongside the GUSA executive election. It will provide an opportunity to assess student support for better, environmentally conscious investment practices.

This editorial board encourages students to vote Yes on the referendum to signal to the administration that the student body does not want the endowment to be invested in companies and practices that are financially unsound and, more importantly, systematically destroying the environment.

This referendum would not be the first measure in the direction of climate-friendly investment. In 2015, Georgetown withdrew direct investments in thermal coal, followed by a further measure in 2018, making efforts to divest from tar sands. While these measures are valuable in their own right, the university still allocates a percentage of its $1.5 billion endowment to funds invested in fossil fuel companies. This referendum is a chance for students to give an on-the-record opinion the university will have to address, if not act on. While the referendum is not binding, we must use the tools we have to push Georgetown to act in the school’s—and the planet’s—best interest.

The referendum provides an opportunity to bring Georgetown in line with its own Socially Responsible Investing (SRI) Policy. The proposed process resulting from the divestment policy would play out over five years in three stages: evaluating current investments, pursuing actions as a shareholder to move companies into compliance with Clean Energy standards, and divesting if need be. The university can also shift its equity from investment funds containing fossil fuel companies to more environmentally conscious funds. If Georgetown is to seriously commit to responsible investment, it must be willing to follow these steps.

At the time of publication, 109 members of Georgetown’s faculty have signed an open letter to the university in support of divestment. The letter states that the “continued extraction and burning of carbon-based fuel is incompatible with any vision of a just human future.” They also call on Georgetown’s Jesuit identity as a reason to recognize the self-declared values of being men and women for others and take action to safeguard it. The letter mentions Pope Francis’s 2015 encyclical, Laudato Sí, which explicitly names climate change as a social justice issue. With the combined weight of the university’s faculty members and its students, 2020 must be the year we choose complete divestment from fossil fuels.

GUFF, which grew out of the broader Go Fossil Free movement, has been instrumental in pushing forward campus action on the subject. Their constant advocacy led to resolutions passed in GUSA, a memo detailing the steps in the proposed five-year process, and meetings with the university’s working group on socially responsible investing, which directly resulted in the adoption of the current SRI policy. Though GUFF’s work is incredibly valuable, they cannot do it alone. Students should vote to further support GUFF’s mission and validate a history of meaningful action.

A Yes vote on Feb. 6 would also place Georgetown students within a wider context of student activism across the country. At the 2019 Harvard-Yale football game, more than a hundred students flooded the field and delayed the game with a collective protest about the universities’ fossil fuel investments. Other academic institutions, notably the University of California system, have recognized there is no longer a financial justification for these types of investments—fossil fuel assets actually pose a financial risk. According to the Institute for Energy Economics and Financial Analysis (IEEFA), fossil fuel companies lag behind in the economy and world stock markets. A 2018 IEEFA report highlights structural headwinds for the industry and projects intensifying negative trends.

Ultimately, this referendum also indicates Georgetown’s lack of transparency about asset allocation. As a private institution, the university does not disclose its investment portfolio to its students, even though we are profoundly affected by these decisions as members of the community. The size of the endowment, which is currently growing at a slower rate than that of other top universities, affects the financial support available to students and funding for projects that could improve the quality of student life.

The referendum will have few tangible effects, however, if Georgetown’s administration fails to act on the vote. The university has a responsibility to respect the outcome decided by students at the ballot box just as much as it does in any other space. Voting results demonstrate the will of the student body, and as an institution tasked with providing an education and a home for its students, the university must honor and act on Thursday’s result.

Voting Yes on this referendum will definitively show a desire for socially responsible practices to an administration that continues to make progress only when prodded, and has not conclusively put an end to fossil fuel investments. While the referendum, unfortunately, does not bind Georgetown to a course of action, this should not diminish the value of a campus community standing up for its beliefs and registering its dissent from Georgetown’s policies. Vote Yes on divestment to stand up for ethical practices, and show a better, cleaner way forward. 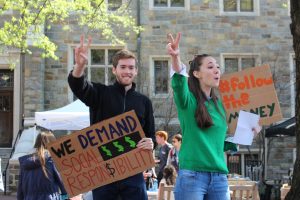 “The university has a responsibility to respect the outcome decided by students at the ballot box.”

Do students respect the presidential outcome decided at the ballot box?