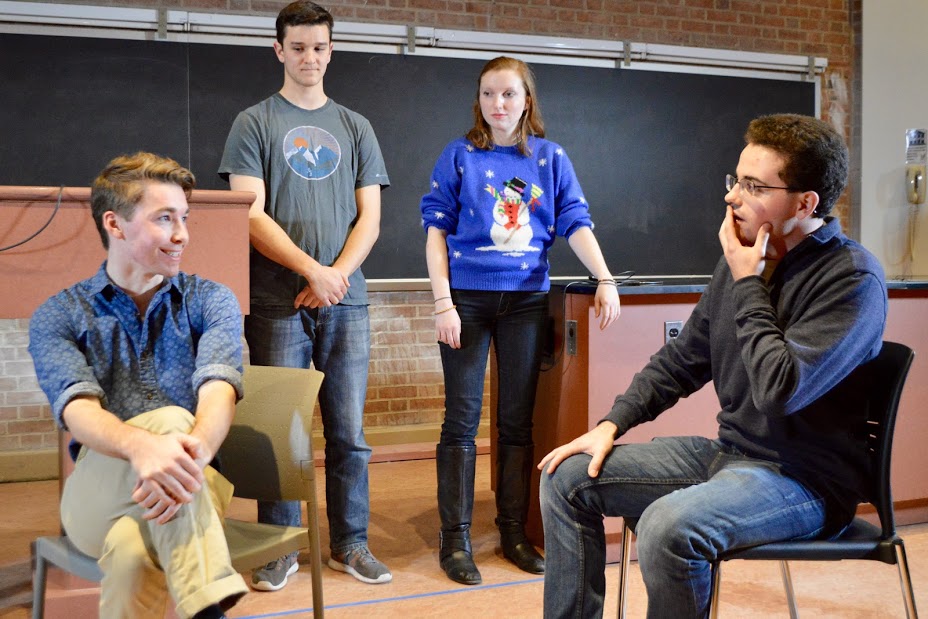 Aside from the occasional snide remark in Matthew Kroenig’s Introduction to International Relations lecture, the Reiss 103 auditorium is not usually a space for comedy. Half of the “stage” is occupied by a large lab bench. Yet on Wednesday Dec. 7, the final night of the fall semester, underneath two imposing prints of the periodic table of elements and in front of a professor’s lectern, GUerrilla Improv defied the conventions of their performance space.

The show featured both long- and short-form improvisational comedy over four acts. Scenes varied widely in setting and topic. Skiers grumbled about the expensive fares on “Mt. Pricey,” Hannah Montana led a press conference about maple syrup, an unusual student impressed at his college admissions interview with his bubble-blowing skills, and former lovers bickered in a series of court cases over instances of unwanted food sharing.

The group’s referential style and willingness to abandon convention charmed their relatively small audience, who filled about half of the seats in the large auditorium, largely by simply acknowledging that the members were improvising.

The show, whimsically titled “All Day Breakfast” with the disclaimer that breakfast would not be provided, was only the group’s second public performance, and the first since the group became an official Georgetown student group with access to benefits early last month. But while this performance, the culmination of eighteen months of hard work, succeeded, its catalyst was painful, persistent failure.

“As long as I can remember I’ve wanted to do comedy,” Hoeglmeier said.““Each year after I didn’t make it, I felt like I was missing out on something …I felt like there was a part of me and what I wanted to do that I was neglecting.”

In the fall of 2015, Hoeglmeier’s sophomore year, she estimates approximately 60 people auditioned for the GIA. Only two were offered a spot on the team. Hoeglmeier saw this disparity as an opportunity.

Each of the ten original members of GUerrilla Improv have auditioned unsuccessfully for the GIA at least once. In fact, the first meeting of what would later develop into GUerrilla Improv took place at the end of the first round of auditions under the florescent lights of Hoya Court.

The idea Hoeglmeier presented to the four other auditionees had been brewing in her mind as early as a year before that day in the Leavey Center. Initially, she thought she could organize what is referred to in improv as a “jam,” which would involve getting people together in a casual setting to play improv games and hold practices scenes.

With this in mind, Hoeglmeier enrolled in an improv class with the Upright Citizens Brigade in New York City the summer before her final audition for the GIA. After class one day, Hoeglmeier asked her instructor for advice.

After assuring her that she had the necessary technical skills, Hoeglmeier’s instructor warned her that she should still be prepared for the worst.

“If this is something that you really want to do,” he told her, “and you don’t make it on that team, start your own team.” 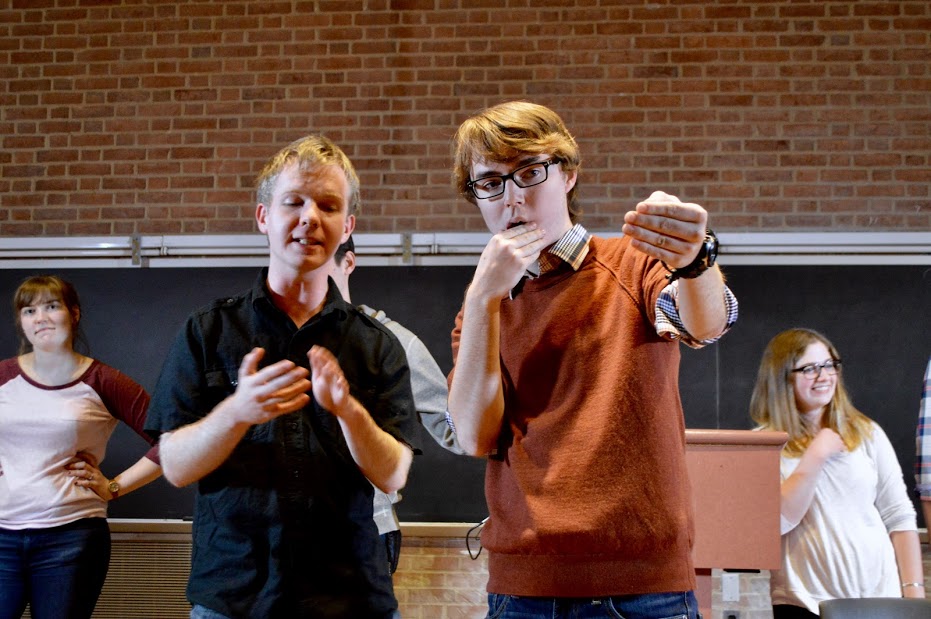 Following her third rejection from the GIA, Hoeglmeier began to run jams for anyone interested in improv. What had started as one jam a week in September quickly turned into two, and the small informal group continued to grow.

These weekly meetings are designed specifically for beginners. For Hoeglmeier, everyone is welcome.

As the group ballooned, the second weekly practice spawned for those more serious about improv,  those who might be interested in performing for a public audience. During these practices, members of the more exclusive performance team learn and practice advanced improv techniques, including more complicated scene structures and specific terminology.

When Hoeglmeier, Rieve Bule (NHS ‘19), and Ryan Yoch (C’19) began the process to give GUerrilla Improv access to benefits and official club status, this practice structure became the foundation of the club’s pitch to the Council of Advisory Boards (CAB).

Membership in GUerrilla Improv is not earned through an audition. Instead, Hoeglmeier and Bule developed a tiered membership system based on attendance at open practices.

To join “the back line”, the first level of membership, you must come to three open practices in one semester. If you attend seven, you are invited to join “the front line,” attend the second practice of the week, and can be considered to act in any of GUerrilla’s public performances.

The group’s name, GUerrilla Improv, is a reference to warfare involving small mobile groups of combatants with varied training. The idea came about organically during one of the group’s first practices in an ICC Classroom.

The phrase slipped out of Hoeglmeier as she was addressing the group, which at the time included several students who had never previously attended an open practice, explaining why she had been scrambling to find a classroom for the rehearsal.

The name caught on immediately.

“[Our team] is something that came out of nowhere and that people weren’t expecting,” Hoeglmeier said.

Initially, the group eyed acceptance as a group within the Performing Arts Department, which would have meant funding through the Performing Arts Advisory Council (PAAC). But according to Hoeglmeier, they didn’t believe there was money in the performing arts budget to support new groups, especially when the group would not be bringing in money itself.

Eventually, GUerrilla was granted access to benefits through the Student Activities Commission (SAC). In a unanimous vote, citing the group’s five year plan and awareness of their needs, the SAC agreed that GUerrilla should be considered a Georgetown group.

“The reason SAC took us is because so much of our mission is based on fostering a space for people interested in comedy, interested in improv,” Hoeglmeier explained. “Because so much of it is…building a community and focused on the teaching, the learning, the practicing, that made it fall comfortably under SAC.”

“More than any sort of financial help we got from it, what it represents helps us more than anything else … the fact we’ve been granted club status means that we are a legitimate source of comedy on campus,” Bule added.

“It feels really validating,” Hoeglmeier continued. “It feels good knowing that it’s not just us convincing ourselves that people want us. We pitched our group and people wanted us.”

While the ensemble’s talent was immediately evident to those who populated the seats of Reiss 103 during “All Day Breakfast,” unlike Hoeglmeier, many of the now official group’s members had never seriously studied or practiced improv comedy before joining GUerrilla.

Some, like new cast member Logan Arkema (COL ‘20), had previous experience on the stage.

“I did community theater a lot like elementary, middle school, some stuff in high school,” he said. “With improv, I just did improv club…which was very low key.”

Others had even less exposure to improv.

“My primary improv experience was watching “Who’s Line” between the ages of four and seven, not understanding a single joke, but loving it anyway,” said Angela Caprio (COL ‘19), who also joined GUerrilla in the fall.

For many in the club, the desire to join GUerrilla came out of a frustration with the culture at Georgetown. As early as his New Student Orientation, Arkema realized that the existing culture might pose an issue for him.

For others, the desire to try improv and join GUerrilla came out of the need for a creative outlet.

“I came into college still feeling like I was a theater kid…I felt like I still needed an acting outlet,” Bule said.

The sentiment was echoed by Caprio. “I realized, hey, I don’t have a creative outlet at Georgetown because I’m always doing my German homework.”

Rob Kem (COL ’20) joined for a mixture of these reasons, to build on his experience with improv in high school, out of frustration with other Georgetown groups, and because he needed another space.

Hoeglmeier wants the group to be even more inclusive towards members of underrepresented groups. GUerrilla hopes to co-sponsor some of their open practices with organizations like Black House, Casa Latinx, and the LGBTQ Center, to encourage students who participate in events in those spaces who might be interested in improv to try it out.

“Comedy is super straight white male … [doing this] is a way to say that if you want to try this, but you also don’t want to not know anyone there, there will be other people from an organization there, other people that you know, that have the same experience as you … at least in one realm,” Hoeglmeier said.

For the fourteen members of GUerrilla’s performing team, mastering the art of comedy has required much more than fun and games.

“I had expected that it would be a little more chill than what it turned into,” Kem admitted.

“We have buckled down a lot more since last year,” Bule added.

Despite the fact that improv comedy is performed without pre-determined scripts, props, or costumes, preparing for each show has still required hours of preparation from each member of the team. Despite being in existence for a year and a half, the team has only performed two public shows.

“Last year, [GUerrilla] was a small, but scrappy group,” Hoeglmeier explained. “At the beginning of the year … I was the only one who had been formally trained in improv.” That limitation made preparing to actually perform difficult, so the group decided to wait until the end of the year

Since then, as several members of the group have become more involved and knowledgeable about improv, the team’s preparation has become more focused and efficient.

Still, Hoeglmeier believes that the group has more work to be done to earn its place within the Georgetown community. The team has tried to make membership within the organization free and accessible, and the group does not charge for any of its shows.

“For a lot of people, not only would it be scary to try improv, but to try improv with a lot of strangers … it just heightens the issue.”

But even as the team takes their craft and mission more seriously and prepares for more shows and rehearsals in the coming semester, being a part of GUerrilla Improv has remained a rare and rewarding creative outlet for all its members.

“This is the first thing I’ve really felt a part of at Georgetown,” Caprio said.