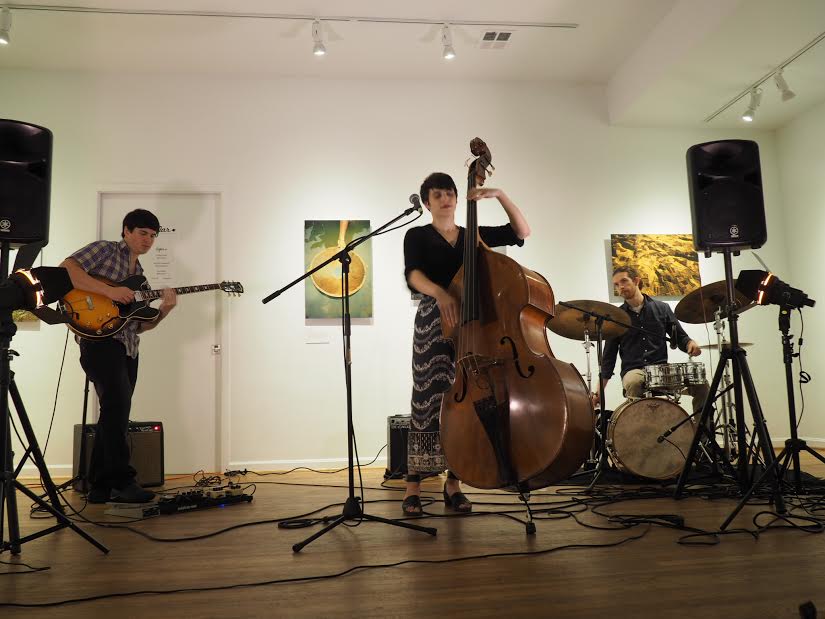 A crowd of people file into WeWork, a trendy office coworking space in DuPont Circle, on a Wednesday evening. Chattering amongst themselves and opening up their wine and beer bottles, they settle into couches and sit on the floor. The location exudes cool; WeWork includes an open lounge space featuring an odd assortment of couches and chairs and modern office spaces separated with glass walls. There’s a camaraderie that feels more like a casual house party than a concert. It would come as a surprise to an uninformed bystander that this group of strangers was actually waiting to see three unexpected artists perform.

Washington, D.C. lacks the distinct arts and culture scene of some other U.S. cities like Nashville or New York City. But to those with a pulse on the industry, the past decade has been marked by radical growth for the music and arts scene in the District. Fitz Holladay, the D.C. Director of Sofar Sounds, and Chris Richards, Pop Music Critic at the Washington Post, credit the growth to a recent influx of young people that began around 2008. 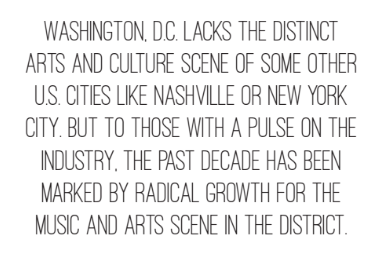 According to Holladay, after the 2007 economic recession more young people moved to D.C. as federal spending protected the city and provided job opportunities that may have been scarce elsewhere. Richards said that the demographic change was due to Barack Obama’s 2008 Presidential election, which he believes attracted a younger population to the DMV area.

In addition to this demographic shift, Richards also attributes D.C.’s burgeoning live music scene to a broader shift in the artistic economy over the past decade. As artists make less money via online streaming than they would have selling CDs, touring schedules have become increasingly competitive. “The D.C. nightclub world has tried to expand to that,” Richards said.

He referred to the expansion of new music venues and clubs that have opened in the DMV area in the past decade, including the Fillmore Nightclub in Silver Spring, Gypsy Sally’s in Georgetown, and the re-opening of the Howard Theater and U Street Music Hall on U Street.

The biggest challenge? Oversaturation. “Clubs like the 9:30 Club will sell out constantly because they’re hosting really recognizable acts. It’s a lot harder to get someone to come out on a Tuesday night to hear something unfamiliar to them. It’s a tender balance and I think people are still trying to figure out how to get it together,” Richards said.

And yet, on a chilly Wednesday night, WeWork is full to capacity with people ready to hear three artists they did not even know the names of prior to that evening. So, maybe Sofar Sounds is doing something right.

Founded in London in 2009, Sofar, which stands for “Songs from a Room,” currently exists in 294 cities around the world. Their model is reflective of a new age of Airbnb and Uber, where technology blurs the line between private and public. Sofar hosts pop-up concerts in secret locations, which according to their website could include a roof, attic, bedroom, office space or church, to name a few.

Audience members log on to Sofar’s website and sign up for a date, general region of their city, and time. If they are randomly selected for one of a limited amount of tickets, they’ll find out the exact address the day before the event and the three artists when they arrive at the venue. Sofar D.C.’s ticket prices have changed several times, beginning with a “pass the hat” donation model to an online pay-what-you-want system in early 2016. As of January 2017, tickets cost a fixed price of $15.

Sofar D.C. started in March 2015 and expanded quickly, as Holladay said that the team has gone from hosting one show a month to over thirteen shows across D.C. in February 2017 alone. One of Sofar’s biggest challenges isn’t a lack of interest, but the very opposite.

“We have so much demand, which is wonderful. We have all these amazing artists and all these potential venues that are willing to host us. So the challenge is that we’ve grown very fast so just making sure that we’re not losing quality along the way in the way that we operate,” Holladay said.

In one night, a Sofar audience member may experience the full spectrum of music genres. On Nov. 22, the show opened with Brackish Water Jamboree, a charming country group hailing from Tidewater, Virginia.

Following Brackish Water Jamboree’s set, Naimah Muhammad (Stage name NAIMAH), a recent graduate of the University of Southern California and a D.C. native, took the stage. After playing a couple of original songs, she concluded with a soulful rendition of Justin Beiber’s “Let Me Love You.” Sweet and full of youthful acoustic charm, Naimah is the kind of D.C. artist Sofar can promote to a local audience. 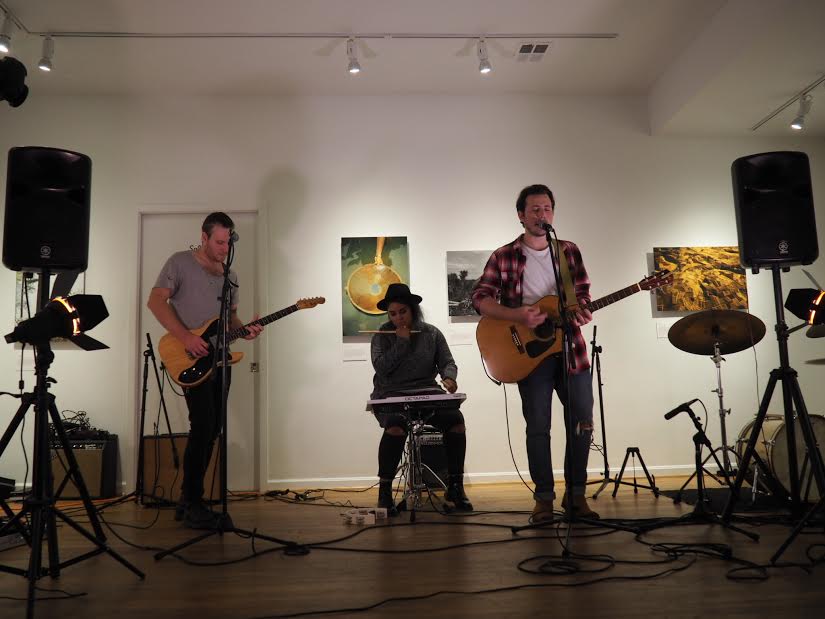 “The main thing we’re doing is providing a platform for artists to have an engaged audience and the content we then distribute, so [we are] giving them exposure,” Holladay said. Sofar gives their artists a high quality video of their performance, which is then uploaded to Sofar’s YouTube channel that has over 260,000 subscribers as of February 2017.

To Paul Bidanset, lead vocalist of Brackish Water Jamboree, the value of this technology is high. “With so many people today discovering their new favorite artist or band via video, it’s crucial to have high quality videos with good sound, good video, and good recording equipment. What lots of people don’t realize is how expensive that is. If you’re an indie band, you’re essentially a small business and having to front those costs could be difficult,” Bidanset said.

The Sofar show concluded with Rufus Roundtree and Da B’More Brass Factory, a New Orleans-style brass band based out of Baltimore. Loud and charismatic, they exuded energy and by the end of the set had successfully encouraged the entire crowd to stand up and dance along.

A country band, an alt-pop singer songwriter, and a large brass band: Sofar doesn’t shy away from anything.

In between each of Brackish Water Jamboree’s songs, Bidanset paused to re-tune his banjo while the other members made endearing jokes and small talk with the audience. “This is definitely the coolest thing we’ve gotten to do as musicians,” Rachel Gaither, violinist, said during a break in the set.

Sofar tries to cultivate a culture where music comes first. At the beginning of each show, a Sofar volunteer informs the audience that rules include refraining from texting and staying for the entire duration of the show.

Bidanset admits that bands may not be accustomed to this level of attentiveness. “It’s really nice because you actually have people sitting there watching you, and it’s actually also a little intimidating, because sometimes the distractions in a more traditional performance venue kind of act as a bit of a buffer. But when you have the light on you and everyone’s quietly observing you, you feel a little vulnerable.” 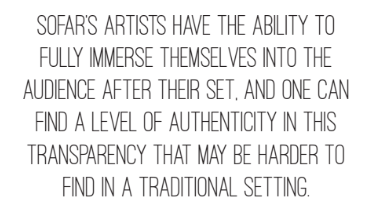 In between the second and third sets, a Sofar volunteer asked each member of the audience to high five the person to their right and left, and then to tell an embarrassing story about themselves to one of the strangers. This is another tactic that Sofar employs to try to encourage more interaction between guests; the room is quickly awash with chatter.

Taylor Bono, 24, attended her second Sofar show on Nov. 22 and was quick to compliment the culture that Sofar has created. “What I really like is number one it’s local music, regular folks who are like: ‘want my CD? I’m from around here.’ The second thing I like is that everyone is on the ground, we can bring our own shit to drink, and we’re talking. I really value that, I love being able to connect with people.”

In addition to connecting with other guests, audience members also have more direct access to the artists themselves. Bono, who is from the same hometown as Brackish Water Jamboree, introduced herself to the band after their set. Gaither interrupted our discussion to hand Bono a copy of the group’s CD, which each of the band members had doodled on. “This is what I’m talking about,” said Bono. “This is what I f*cking love.”

This interaction is what makes Sofar different from the structure of traditional venues, where bands have a level of untouchability, disappearing backstage at the conclusion of a set. Sofar’s artists have the ability to fully immerse themselves into the audience after their set, and one can find a level of authenticity in this transparency that may be harder to find in a traditional setting.

According to Eliza Yackamovich, another Sofar guest, “I really like the intimacy. It seems really homey here, it’s a community in a way…The artists are all very nice and are willing to talk to the crowd more than just a regular concert.” 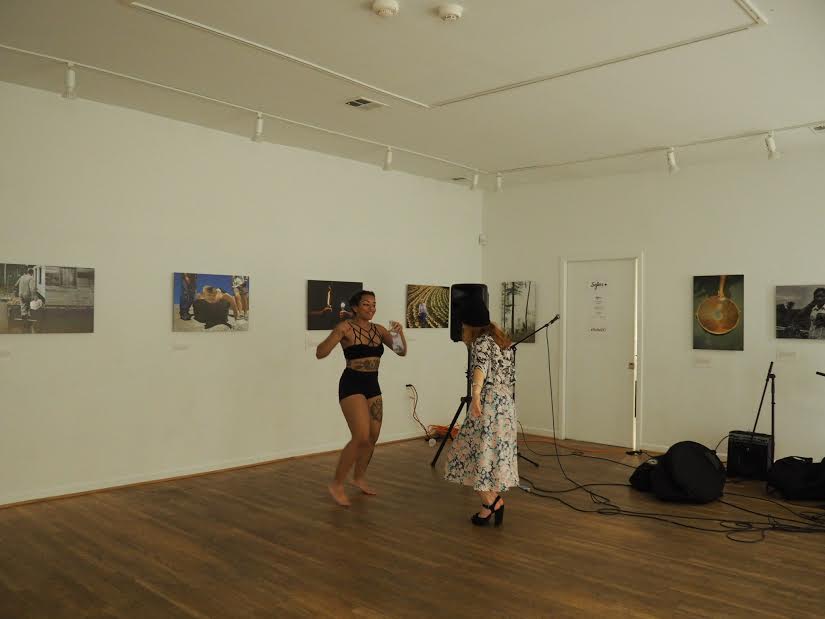 Artist Dazeases dances in the studio.

Within the larger picture of the D.C. live music industry, Sofar appears to have carved itself a unique niche. The goals of a small music venue and Sofar, however, may be more similar than they appear on the surface. While talking to two owners of small music venues, familiar themes reappeared.

Ben Tufts lives in the 16th Street House, a music house that was built in 1939, where he hosts shows. In an e-mail, he wrote, “I’d played a lot of house shows, and my goal was to combine the best things about house shows–the intimacy, the casual environment, the fact that you can cater and BYOB but still have it be all ages–with none of the bad things–crappy sound, unclear hospitality and compensation.”

And just a few days before they played at the Sofar show on Nov. 22, Brackish Water Jamboree performed at Gypsy Sally’s, a venue in Georgetown that opened in 2013. David Ensor, the owner of Gypsy Sally’s, described the 18-month search across every quadrant of D.C. that he and his wife went through to find the perfect building for their venue.

Whereas Sofar uses the uncertainty of location to their advantage, Ensor worked hard to create a physical space for an optimal concert experience, “We went to a lot of trouble to design the room to be comfortable, and we have seating on three different levels…so everyone has great sightlines,” Ensor said.

Gypsy Sally’s also boasts of a free separate lounge, separate from the main music room, that includes a VW van where audience members can sit. The bar in the lounge has its own stage where another band can play. “That’s part of the experience here. You can be on a break and you wander through the hallway and you come around a corner and there’s another band, you didn’t know they were there. And you’re like ‘Oh my gosh! Who are these guys? That’s so cool!’ So that’s part of the experience, that you’re getting something that you didn’t expect,” Ensor said.

When looking to the future, Holladay is focused first and foremost on Sofar’s sustainability. “The goal is, we have this magical thing, how do we ensure it’s around for the next five, 10, 20 years?” For both Sofar and Gypsy Sally’s, the only guarantee is that right now, the uncertainty sells.