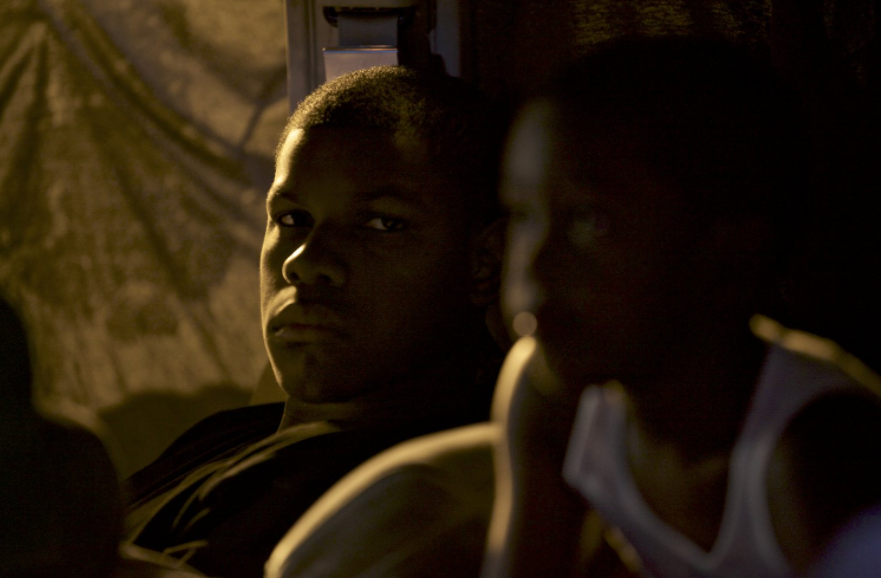 Trailer Takes: Imperial Dreams, Brimstone, and I Am Michael

Amy: I want John Boyega to have everything in this world. His disarming humor completely charmed me in Star Wars: The Force Awakens—the 2015 megahit the catapulted him to A-list territory—and it’s great to see him keeping the momentum going and flexing his dramatic muscles. This trailer finds him apparently living in his car, navigating his rough neighborhood and trying to do right by his young son (whose intercut face keeps reminding us that this struggle is all for an adorable innocent). We get shots of Boyega crying, Boyega telling his mentor that he wants “to teach these kids to not make the same mistakes I did”, and Boyega crying in the shower. Though relying perhaps too heavily on these predictable good-guy-trying-to-escape-a-bad-past tropes, the trailer ratchets up the tension effectively with quick cuts, centering the relationship between Boyega and his son in a way that feels human.

Graham: If the trailer is any indication, this movie will live or die by the strength of John Boyega’s performance, and it certainly seems as if he is going to nail the role. What I love about Boyega is how natural he feels in his roles, whether it’s as Finn in The Force Awakens or as a British hoodlum in Attack the Block. This is certainly a bit more dramatic than he’s used to, but I think he’ll be more than ready for the task. In that sense, the trailer is a success. But with that being said, it does feel a little generic in its structure and its story, and I hope that the relationship between father and son will anchor the film. Imperial Dreams doesn’t seem to be a groundbreaking film, but it does seem to be telling a genuinely moving story.

Caitlin: Wait, Finn, is that you? Are you old enough to be a father? (I guess I’ll have to accept it because his young son looks too precious). Besides that, the trailer fails to capture my attention in any meaningful way. I agree with Graham: the plot is nothing original, and I fear that the film will have to rely on the grittiness and the tenacity of John Boyega’s performance alone. I’ll admit it, Boyega charmed me immensely in The Force Awakens with the earnestness and the humor he used in his portrayal of Finn; however, in Imperial Dreams he will need to fully immerse himself in his character, relying on more than simple amusement. I do think that the trailer does a great job ramping up the intensity, while still retaining an air of sentimentality around the relationship of father and son, which is sure to ultimately drive the film.

Amy: I hate scary movies but I love scary movie trailers. Something about the rapid, discomfiting cuts, the eerie music and the artfully dark shots satisfies some obscure craving I have for evil until I revert back to watching Ellen clips. I’ve watched the Brimstone trailer a couple times now and I’m still not sure as to the exact relationships between the characters but I count that as a “win” in this particular case. Even though I love squeezing every possible bit of information out of a trailer, it’s unfortunate when one seems to give every twist and plot point away. I think this Brimstone trailer does just enough; I know that Dakota Fanning is a mute, probably supernatural being, Guy Pearce is a scar-faced reverend (maybe a werewolf???) on Fanning’s trail, and that rifles and Old West prostitutes abound. The pulsing drumbeat, the washed-out color palette and the expertly-chosen pieces of dialogue all make for a crisp, creepy trailer.

Graham: Wow. I have very little clue as to what this movie is about exactly, but I now really want to see it. It’s a very atmospheric trailer with hints of the supernatural and the violent, which already sells me on the film. I do think that the first half is much more effective than the second half of the trailer. Once Kit Harrington gets introduced, the quick cuts and dialogue start to confuse more than they intrigue. I hate to criticize trailers for giving away too much and then turn around and say that this trailer doesn’t give away enough, but some context would have been helpful. Still, the visuals and the actors are enough to be satisfying, and this trailer seems to know that.

Caitlin: We are guided through the trailer, perhaps unwilling, by the unsettling rasp of Guy Pearce’s voice. The muted colors of the landscape and the eerie music provide a backdrop to an increasing sense of agitation and fear. The film appears otherworldly, intense, and violent. Pearce seems to pursue a mute (evil???) Dakota Fanning with a disconcerting fervor, and other than that I am not really sure what’s happening, although I am not really sure that I care. I don’t think I’ve seen Dakota Fanning in anything in years, but hey, when I saw Carice Van Houten and Kit Harington (albeit with a weird, forced Western drawl), I was sold.

Amy: This is fascinating. Based on the true story of Michael Glatze—an advocate for gay rights who later in life denounced homosexuality—I Am Michael follows James Franco as Glatze as he goes from embracing his male partner (Zachary Quinto) to romancing Emma Roberts. Director Gus Van Sant elevates shots of the ordinary—a car driving down a highway, a park on a sunny day, a Bible colored with post-it notes—with interesting framing and simple music in the background. The conflict is subtle, far from edge-of-your-seat drama, but the story is perplexing enough to be riveting, especially with the promise of truth hidden somewhere in the shots.

Graham: I dig the tonal shift that occurs about halfway through the trailer (and, I’m assuming, halfway through the movie). The trailer wrestles with a lot of various themes: religion, sexuality, acceptance, love, and so on, and it actually does a very skillful job of balancing them all. I love the implications of the shots of Franco swimming and emerging from the lake. The subtle religious imagery is very thought-provoking. I think that this trailer is the best of the three because it effectively communicates the conflict, introduces and teases the film’s themes, and ends on a wonderfully subdued note.

Caitlin: I haven’t seen James Franco in a truly moving performance in years. I think I Am Michael will be his turning point. This trailer is wonderfully subtle and simplistic in a way the other two trailers were not. It depicts Michael’s transition mentality and his inner turmoil in a beautiful, almost soft way, utilizing gentle piano music and naturalistic elements, such as the lake Graham mentions above, and a sweeping field of wildflowers at the trailer’s hushed end. In just a few short minutes, the trailer is able to introduce the various themes of the film without them overcrowding one another and acquaint us with a cast almost effortlessly natural in their roles.