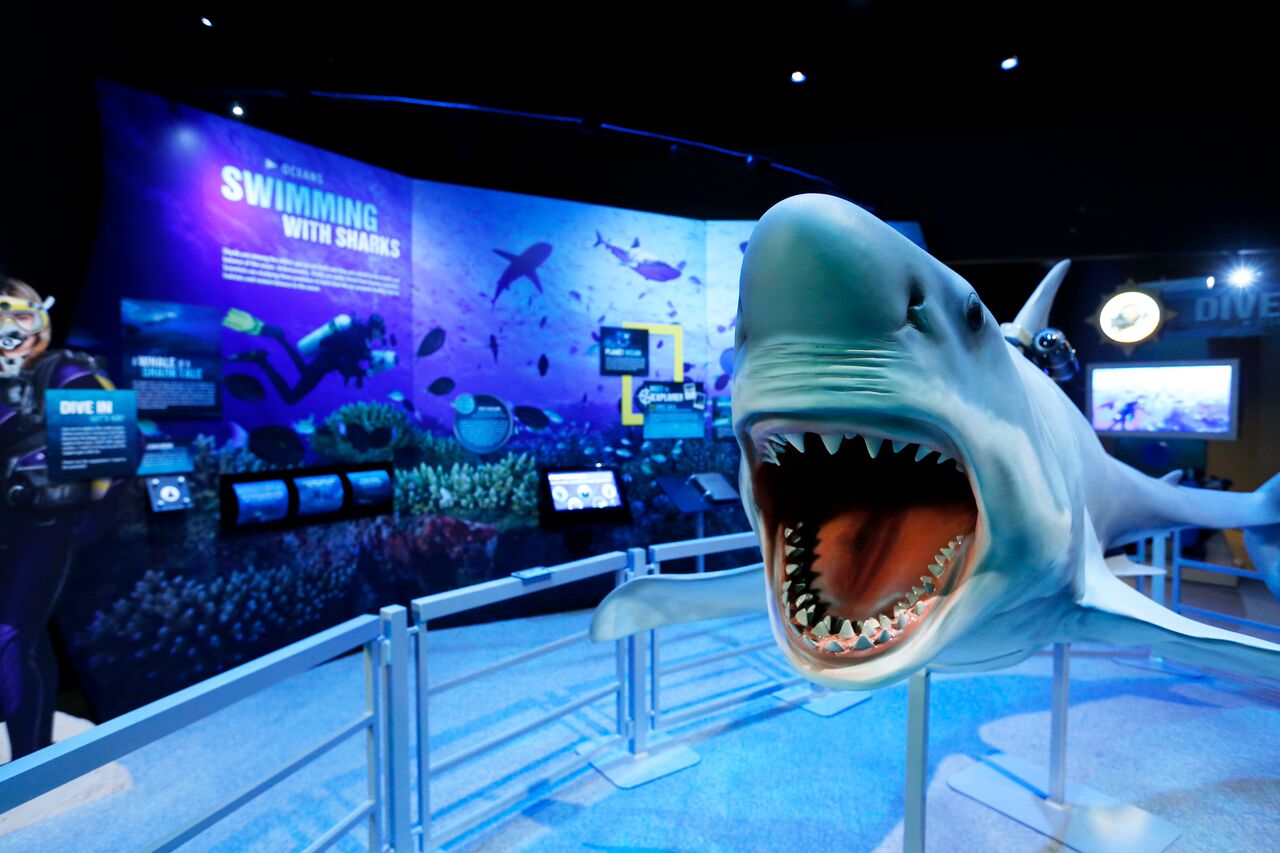 The National Geographic Museum’s newest exhibit, Earth Explorers, opened on a peculiarly balmy February day. The exhibition, running February through September 2017, offers visitors the opportunity to become a NatGeo explorer for the day. It takes only a little bit of imagination to propel visitors around the world—whether that be into the depths of the ocean or the canopies of the rainforest.

National Geographic Presents: Earth Explorers was created with the help of Global Experience Specialists (GES), a company that helps museums and other venues add to live experiences through audio visual, creative, design elements. With the help of GES, the exhibition took about a year for National Geographic to create, and for the past three years the exhibition has been on display throughout the country.

The exhibit carries visitors into the world and lifestyles of NatGeo explorers. “National Geographic has given over 13,000 grants for science and exploration since 1888, and the people and explorers that we fund have really interesting and diverse backgrounds and focus on different areas of the world,” said Kathryn Keane, Vice President of Exhibitions at National Geographic Society.

The motivation behind the production of Earth Explorers was to “create an exhibition that could go out to science centers and museums across the country to highlight what NatGeo explorers do in hopes of inspiring young people,” said Alan Parente, Creative Director, Exhibitions & Global Experiences, National Geographic Society.

Earth Explorers consists of several interactive ecosystems: Polar Regions, Oceans, Rain Forests, Mountains & Caves, and the African Savannah. Each section is filled with educational information. Every stop on this around-the-world journey contains an interactive map detailing the different animals living in that ecosystem, a panel titled “high-tech help” that highlights the technology utilized in studying that ecosystem, and a Q&A with a prominent animal.

The importance of conservation and the effects of global warming on the environment are two recurring themes throughout the different ecosystems. Both are relevant problems in Washington, D.C. specifically, especially since the transition to the new administration. On Tuesday Feb. 28, President Donald Trump signed an executive order aimed at rewriting the Obama administration’s 2015 Waters of the United States rule, created by the Environmental Protection Agency and the Army Corps of Engineers to regulate the pollution of tributaries in the United States.

A few blocks north of the White House, the National Geographic Museum has the unique ability, compared to other museums in D.C., of combining both art and science. D.C. is a city heavily influenced by museum culture. The National Mall alone is home to 11 of the 19 Smithsonians, and the city at large features over 70 museums in total. Still, none of these museums focus specifically on science, exploration, and photography, Keane said.

“We have the ability to blend the best in natural history, photography, exploration, and curiosity,” Keane said.

“The long history of the brand, the magazine, and the television specials makes people receptive to coming,” Parente said. “If we were a museum off the mall and not associated with a strong brand like NatGeo, it might be difficult to draw people.”

The NatGeo Museum never considered itself a competitor to the Smithsonians. It seeks to tell stories in a different, more accessible way. “Our strength lies in the amazing amount of assets [we have]: digital [sources], photography, access to first person [sources]—people who are on the ground around the world,” Parente said. “It is not necessarily about showing artifacts in a case—it is much more experiential, hands-on, and maybe a little more fun than what people would consider a traditional museum.” 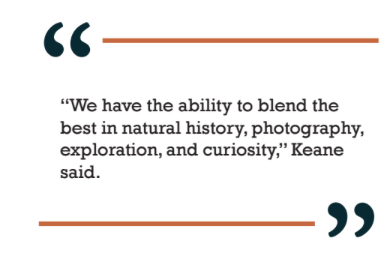 In addition to two featured exhibitions, the museum hosts a wide array of live events, including speakers, photographers, film festivals, and family days. Around 2,000 people attended the free family day held on President’s Day this year. The museum also hosts NatGeo Nights on the third Thursday of every month. The event includes a happy hour with hands-on activities such as themed drink tastings, small bites, or trivia.

March is specifically Earth Explorer-themed, and will include short talks from explorers Kenny Broad, Chris A. Johns, Erika Bergman, and Gina Moseley about their efforts to discover new species, study animal behavior and learn about how technology, innovation, and ingenuity help explorers make and document their discoveries.

The National Geographic Museum also hosts Student Matinee Programs 10-12 times per year. The hour-long presentations are given by photographers, explorers, filmmakers and scientists, and include a short question and answer section afterwards. “The museum is free for students,” Keane said, “and we work very closely with the nonprofit organization called D.C. Collaborative…that raises money to support the transportation costs to the museum.”

When visitors first walk into the National Geographic Museum, they enter the exhibit @NatGeo: The Most Popular Instagram Photos. “National Geographic is best-known for its photography, and our instagram has introduced us to a whole new generation,” Keane said. “The exhibit is aimed at a slightly older audience. Earth Explorers is less about pictures and more about people.”

After crossing into Earth Explorers, visitors are immediately initiated into the world of NatGeo explorers at “Base Camp.” Here, a Toyota Land Cruiser, like those used by explorers in the field, awaits transit, its windshield showing footage explorers have collected in the different ecosystems featured in the exhibit. Visitors are next ushered into the Oceans ecosystem where an almost eerie blue-green light undulates across the floor and a great white shark opens its massive jaws to greet them. As visitors step into a small submarine, water bubbles up around them as they sink under the surface into the depths of the ocean in the corresponding film shown in the windows of the submarine.

Visitors can next wander into the Rainforest ecosystem where a dimly lit, massive tent—replicated from those used in the field—is situated, inviting visitors to encounter the different dangers in the rainforest such as jaguars and poison dart frogs. Next, they can climb into a hot air balloon and overlook the vast expanse of the African Savannah ecosystem where multitudes of animals make their migrations. The use of hot air balloons by NatGeo explorers allow them to get a steady, low-altitude shot of the migrations below.

The target audience for Earth Explorers is family all the way, Parente said. “This is a really fun, interactive, hands-on exhibit—lots of stuff to touch, move, operate, and pose with.”

The interactivity of the Earth Explorers exhibit “allows you to explore and dig deeper into the content if you want…it provides layers of information and it is up to you how deep you want to go,” Keane said. 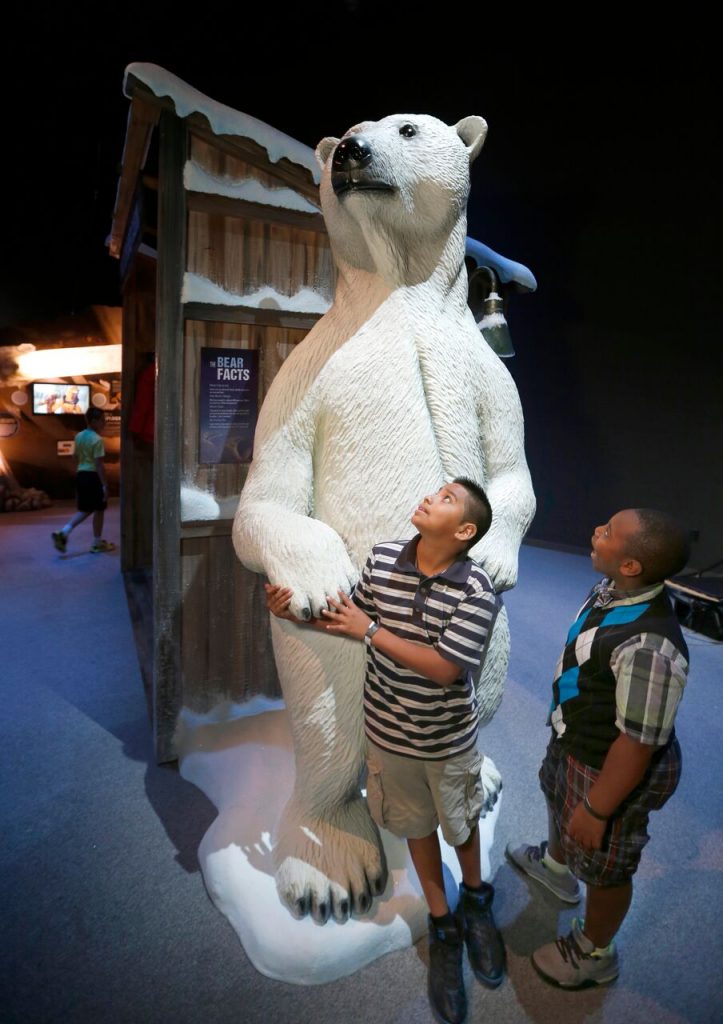 National Geographic’s efforts to market towards families show. Giggling children climb into and out of the land cruiser and hot air balloon and use their sleuthing skills to try to match the footprints with the corresponding animal while parents more closely scrutinize the information presented in the exhibit.

“If a kid is interested, and gets involved, he or she might be inspired to become a marine biologist, an environmental photographer, or a conservationist,” Keane said.

Scattered through the exhibit are multiple “Meet the Explorer” features which focus on the achievements of specific NatGeo explorers. “We fund exploration at almost every level,” Keane said. “We wanted to present a wide variety of exploration from different age-groups, genders, different ethnicities, and different places around the world.”

National Geographic Young Explorer Grantees—college-aged students who have received grants from National Geographic to conduct their own research—are also featured. After being named a grantee, Erika Bergman shared a series of real-time videos conducting manned-submersible dives in hopes of increasing ocean awareness. Grantee Chris A. Johns uses his passion for wildlife photography, documentary videography, and graphic design to increase people’s awareness of the world’s imperiled tropical ecosystems and the people working to save them.

“It is always important to talk about exploring our world,” said Keane. “Inaccessible places are some of the most threatened today, and it is important for National Geographic to take people to these places and teach them more about these places because they will be much more relevant to people if they understand.”

“Every bit of rainforest left is at risk,” states a sign in the Rainforest Ecosystem, confronting visitors with the importance of conservation.

Crossing into the Arctic ecosystem, explorer Enric Sala travels to the Russian Arctic to discover how climate change is impacting the pristine Arctic ecosystem while explorer Steve Winter talks about surviving on top of the world in order to photograph the elusive, endangered snow leopard. Visitors learn that as the ice in the Arctic melts, more of the sun’s heat is absorbed by the resulting larger expanse of dark ocean water which increases temperatures even more.

The Earth Explorers exhibit preaches an increasingly urgent but universal message. “No matter what the political environment is, National Geographic has stood for the same things. We are proponents of the environment, science, exploration, and curiosity,” Parente said. “Our message is universal: explorers look for the truth, and the more they learn, the better decisions we can make collectively.” 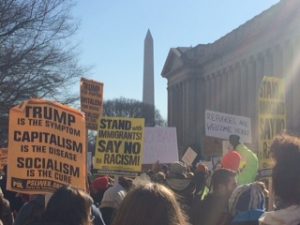 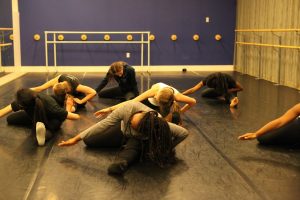 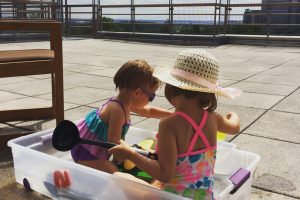