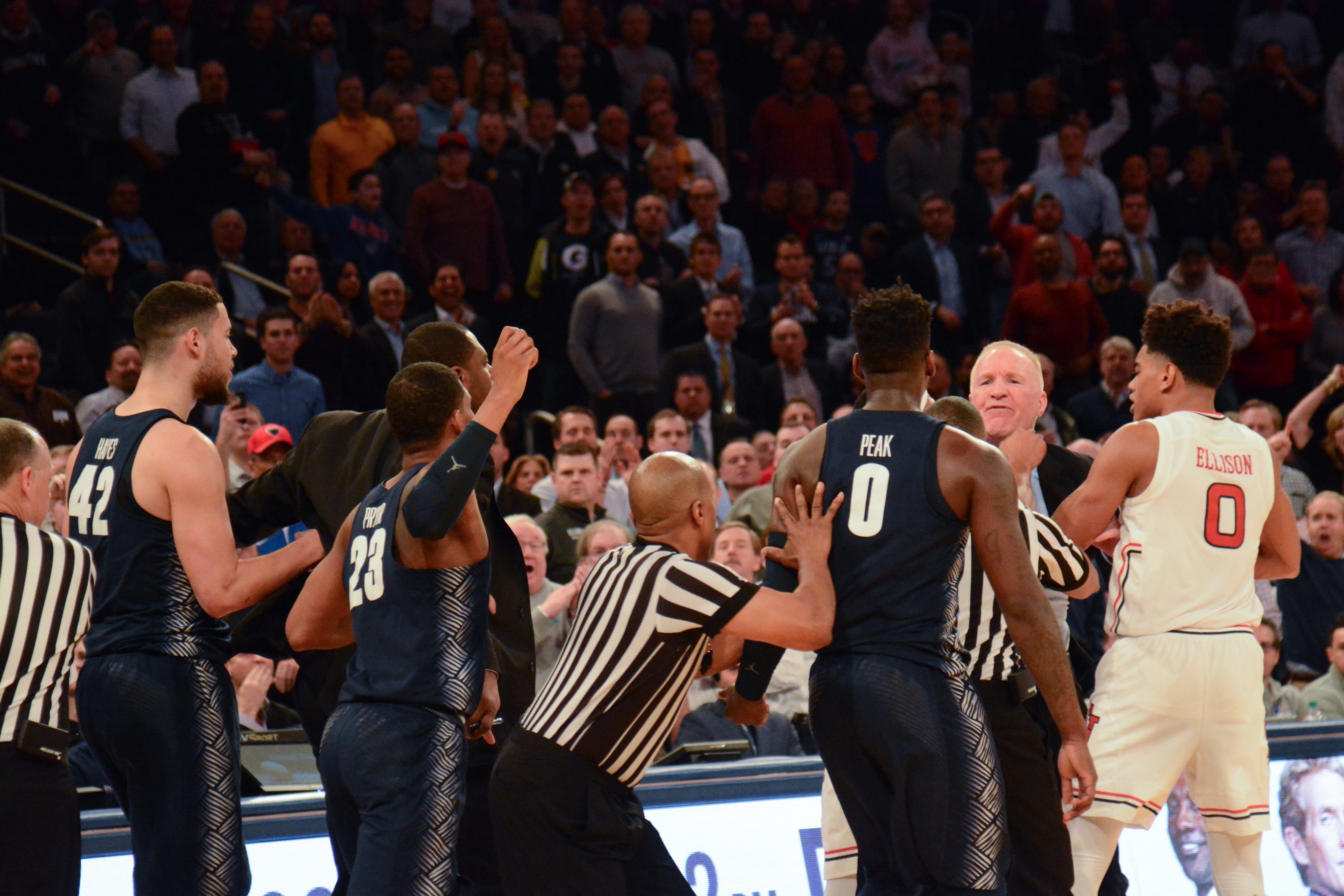 NEW YORK, N.Y.- The Georgetown men’s basketball team (14-18, 5-13 Big East) found itself in a familiar situation with 6.5 seconds remaining in Wednesday night’s Big East Tournament first round game. The Hoyas were down by one, looking for a game-winning basket against a conference foe. But for the Blue and Gray, the result was all too familiar: a heartbreaking loss. Junior guard L.J. Peak’s layup attempt with 3.0 seconds left fell short, and sophomore forward Marcus Derrickson was unable to convert a putback layup as time expired. Madison Square Garden, filled with local St. John’s (14-18, 7-11 Big East) fans, promptly erupted in thunderous applause, as fans celebrated the Red Storm’s thrilling 74-73 victory over the Hoyas.

Georgetown was led by a Herculean second-half effort from Peak, who scored 22 of his 24 points in the final twenty minutes of the game, including 12 consecutive points during a stretch occurring midway through the second half. Graduate student guard Rodney Pryor added 17 points, five rebounds, and three assists, while Derrickson contributed 11 points and nine rebounds. St. John’s was spearheaded by freshman guard Shamorie Ponds, who recorded 17 points and five assists. Junior guard/forward Bashir Ahmed added 14 points and five rebounds, and sophomore guard Malik Ellison had 11 points, eight rebounds, and six assists.

“I love games like that,” said Ellison. “When the crowd is going and both teams are playing physical, I just live for moments like that.”

“The home court enthusiasm is tremendous, (but we) still have to go out there and perform,” said St. John’s Head Coach Chris Mullin. “You have to maintain it for 40 minutes, especially this time of year. The crowd was great. But more importantly, (we) made big plays when (we) had to.”

With the loss, Georgetown ends the season with a losing record for the second consecutive season and is ineligible for the NIT Tournament. With questions abounding from fans about the future of the program, Head Coach John Thompson III declined to comment on the subject.

“After a loss like that, right now, I don’t think it’s the time to do that (evaluate the state of the program)… I’m worried about the group that’s in the locker room right now, the student-athletes that are in there right now, how they’re feeling right now. So, not tonight,” Thompson said. 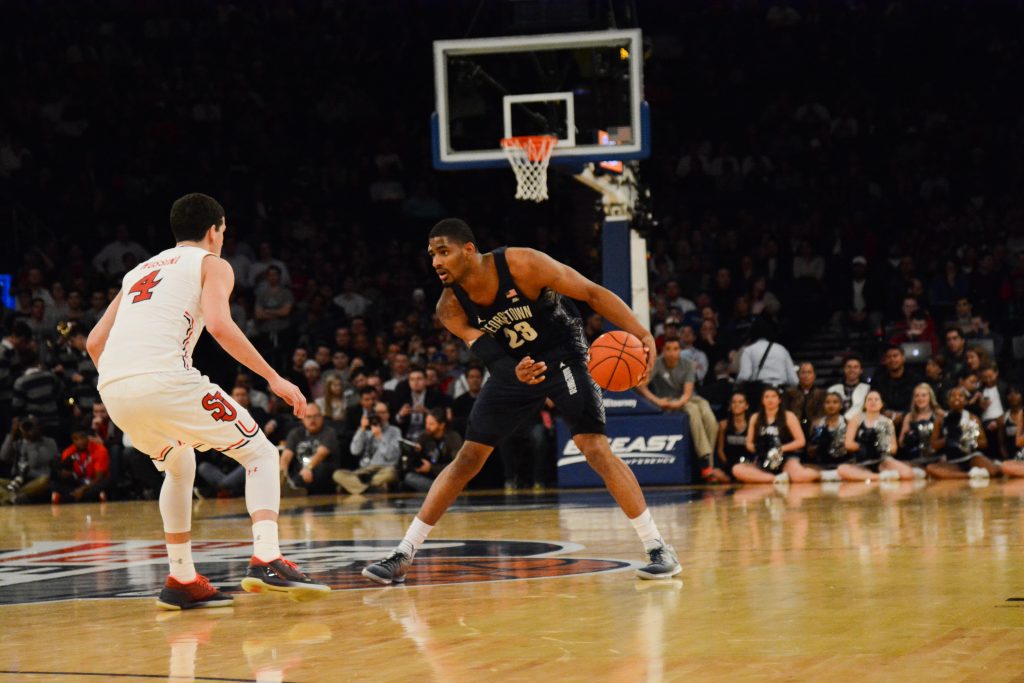 Georgetown rode Pryor’s hot-hand to start the game, as the graduate student hit three of his first four shots, including two three-pointers, to help give Georgetown an 18-9 lead with 13:29 remaining in the first half. This lead was the Hoyas’ largest of the game, as the Red Storm slowly chipped away for the remainder of the period, with much of the comeback effort coming via the foul line. Despite shooting 30 percent from the field in the first half and just 25 percent from deep, the Johnnies made 15-18 free throws to remain within striking distance. Georgetown attempted just eight free throws in the first period, making four.

Foul trouble played a significant role in the period, as 23 total foul calls were called. Peak was limited to just six minutes in the first after picking up two quick personal fouls, while Derrickson was limited by three fouls of his own. Sophomore center Jessie Govan and freshman guard Jagan Mosely both earned two fouls as well. For St. John’s, three first half fouls on redshirt freshman guard Marcus LoVett slowed any offensive momentum the Storm managed to conjure in the period.

A three-pointer from Ponds with 4:37 remaining in the half tied the game at 28 apiece. From there, St. John’s was supported by six made free throws en route to a 38-34 halftime advantage.

“It was a physical game,” said Ponds. “I think we just came out at the end of the first half and set the tone. We wanted to run.”

Pryor opened the second half with a quick three-pointer to bring the Hoyas to within one, 38-37. The Blue and Gray struggled to contain St. John’s for the following five minutes, as the Red Storm pushed the tempo and consistently got easy layups or dunks in transition. Sophomore guard Federico Mussini capped a 13-6 run for St. John’s with a fastbreak layup at the 14:42 mark, forcing Thompson to call timeout. Out of the timeout, Derrickson scored four points and Peak added a layup to bring the Blue and Gray to within two. Following an exchange of baskets, Peak made a layup with 10:12 left on the clock to knot it at 54-54. 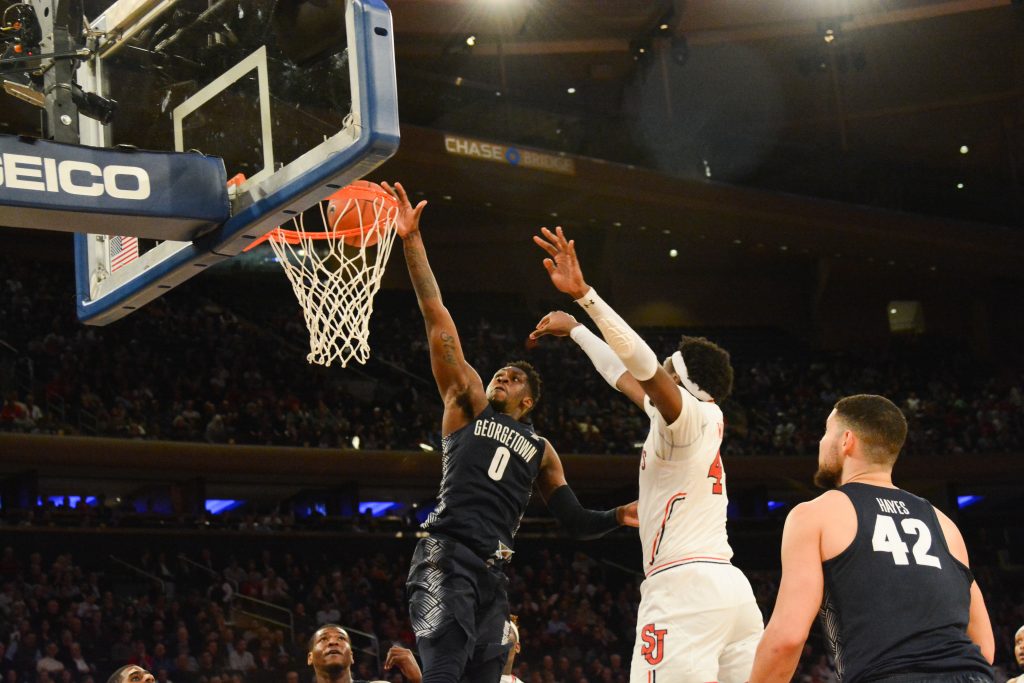 Minutes later, Peak was fouled hard by St. John’s junior forward Amar Alibegovic while driving to the hoop and tempers flared as emotions ran high. Derrickson then crowded Alibegovic to express his displeasure with the foul.

“I was just having my teammate’s back,” said Derrickson. “Someone fouled my teammate, not even making a play on the ball. I’m going to stick up for my teammate any day. That’s what I did.”

Senior center Bradley Hayes then appeared to shove Alibegovic, which resulted in players from both teams coming together in a scuffle under the basket. Just as it appeared the players had sorted the matter out, Mullin ran from the St. John’s bench to inspect the situation.

“I saw Amar go into the stands. I wanted to make sure he [Alibegovic] was okay,” Mullin said.

He then exchanged words with Thompson and Georgetown Assistant Coach Patrick Ewing Jr. as referees held various players and coaches apart from one another. After a lengthy review, Mullin and Ewing Jr. were both assessed technical fouls, while Alibegovic was given a flagrant-one. Peak made 1-2 free throws following the debacle, and play was resumed.

Ponds hit a three-pointer on the Red Storm’s next offensive possession to extend their lead to six with just over eight minute left. Peak scored the Hoyas’ next six points to cut the lead to just one, 66-65, with 5:04 remaining. The Johnnies then hit four consecutive free throws to take a four point lead less than a minute later. Peak responded with two free throws of his own and Pryor added a floater to keep the Hoyas within two possessions. Later on, Hayes then hit 1-2 free throws with :42 remaining to make it a one-point game, 74-73. After a series of timeouts, Georgetown got a crucial defensive stop to regain possession with :15 left on the clock. Peak dribbled upcourt in transition and passed to Pryor. After the ball went out of bounds off a St. John’s player, Thompson called timeout to draw up a final play.

Out of the timeout, the Hoyas ran an isolation for Peak, who managed to get to the rim for a layup attempt. He missed, and in the ensuing scrum for the ball, Derrickson managed to get off a clean six-foot floater that missed as the buzzer sounded, ending the game and Georgetown’s season.

As for his final message to the team, Pryor added that he “Just (wanted) to thank them all for allowing me to come here and play basketball with them. To just tell them to keep moving forward and play hard and representing Georgetown the right way.” 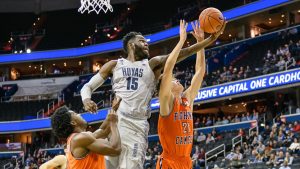 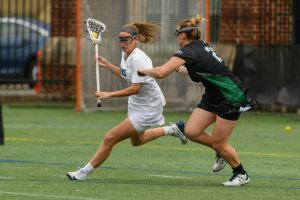 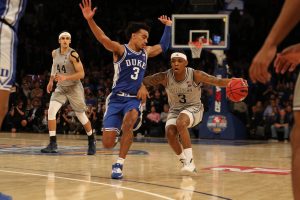