CISR advised the board’s finance and administration committee to establish the policy of not directly investing in private prisons in response to a proposal from Eman Abdelfadeel (COL ‘17), Sophie Bauerschmidt Sweeney (COL ‘17), and Salma Khamis (SFS ‘17) recommending that Georgetown divest from all companies that profit from or sustain private prisons and the Israeli occupation of Palestine.

“It is inconsistent with Georgetown’s Catholic and Jesuit values to hold investments in companies that profit from the incarceration of human beings,” the committee wrote in the memo. In making its recommendation, CISR cited a Department of Justice report that highlighted the harmful conditions many prisoners in private facilities face, and it also noted a statement from U.S. Conference of Catholic Bishop questioning the private prison system.

However, CISR did not meet the students’ demand to divest from other companies and funds invested in the broader private prison industry as well as companies invested in the Israeli occupation of Palestinian territory. The committee claimed the other companies and funds tied to private prisons do not have “sufficiently direct involvement” in the industry, and it also concluded that divestment would not effectively promote peace or end hostilities in the Israeli-Palestinian conflict.

CISR sought public comment in January on the proposal and said it found a strong conesus supporting private prison divestment among members of the university community who submitted comments.

The recommendation received majority support within the committee, and CISR determined the student proposal did not warrant further consideration from the board of directors.

Abdelfadeel, Bauerschmidt Sweeney and Khamis supported CISR’s recommendation of the policy of no direct investments in private prisons, but reaffirmed their support for broader private prison industry divestment and divestment from companies involved in Israel’s occupation of Palestinian territory, they wrote in a statement Monday.

“Recognizing the value and necessity of divestment as a tactic in private prisons and not in Occupied Palestine reveals both the hypocrisy and moral failure of members of the committee, who are apparently willing to object to violence only when it is geographically close enough to weigh on their consciences,” they wrote. They noted that Georgetown divested from companies in South Africa to help end apartheid.

The students also criticized CISR’s recommendation to “seek to avoid” commingled funds with private prison investments, calling it unmeasurable and unenforceable. “We believe this is yet another instance of Georgetown using its Jesuit values as a talking point rather than a moral guide,” they added.

The three students are also members of Georgetown Students for a Radically Ethical Endowment (GU F.R.E.E.), which is asking the university to release its investment portfolio annually and divest from the private prison industry and companies invested in the Israeli occupation of Palestinian territory. Nineteen Georgetown, D.C., and national organizations have supported GU F.R.E.E.’s platform.

At a December 2016 rally, the group presented University President John DeGioia’s Chief of Staff Joe Ferrara a letter of its demands and a list of companies from which it is asking the university to divest. University administrators have not released Georgetown’s full investment portfolio.

Moving forward, the students indicated in their statement that they do not see change coming from Georgetown administration.

“It is even more important, then, that we mobilize to stand for justice and with black and Palestinian communities, especially those within our Georgetown communities,” they wrote.

Ryan Miller Ryan Miller is a former news editor of The Georgetown Voice. Follow him on Twitter @MILLERdfillmore for unabashed tweets about the Sacramento Kings. 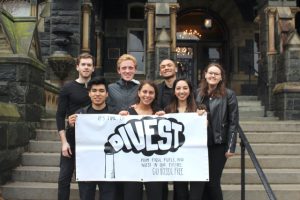 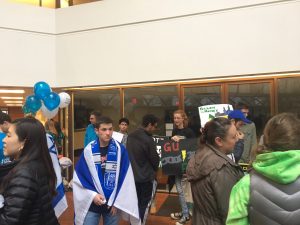