No matter who you are or what you’re studying, you have some sort of fascination with space. Everyone does. Maybe you’re still excited about the plethora of new Star Wars releases, or maybe you insist that Star Trek is better, or maybe you just love to look at the stars each night. Whatever it is, you admit that space is really, really cool, so let this playlist take you on a journey to space and back again.

1. Pink Floyd, “Is There Anybody Out There?”

This is the fundamental question that drives all of space exploration. It’s also the question that inspired some great movies, from Star Wars, to E.T., to Arrival. It’s also a fundamental song for everyone’s Spotify, with its haunting bass synthesizer and masterful guitar solo.

Once your curiosity is established, your next instinct is going to be to go and explore. If you want to get to outer space — or, if you’re Lenny Kravitz — you’re going to want to fly away to do so. The song may be all about just wanting an escape, but it manages to be an incredibly motivational tune.

And, how will you fly? In a rocket, of course! Def Leppard opens this track with the powerful blast off, then launches into a loud, energetic, and exciting rock song. Just make sure you avoid all the asteroids in space — hitting one of those would be the real “Rock of Ages.”

If you’re not an experienced astronaut, expect some vertigo when looking out the window during take off. It’ll help to listen to something familiar, so turn on this song by U2 and you’ll just be “swinging to the music (whoa, whoa)” instead of thinking about how far from Earth you are.

Flying through space is actually pretty cool. After you’ve adapted to the high speeds and zero gravity, you can relax with this steady, alternative track by the Semi-Precious Weapons, and you’ll feel “alive, alive / … aviation high.”

Space is filled with billions and billions of cool things, but black holes are bound to be the coolest things you’ll see out there. (Scientists don’t even know what they are!) Then again, Muse can make just about anything sound amazing, so maybe just get your thrills from this song and stay away from the actual black holes and their extreme, matter-dissolving gravity.

There is one tiny downside to flying into space: since space is so mind-bogglingly huge, it’s going to take a long, long time to get anywhere. Even getting to Mars will take seven months or more. Elton John warns us of the other downsides: “Mars ain’t the kind of place to raise your kids / In fact, it’s cold as Hell.” Don’t take that as a reason not to go, though — the flight will give you plenty of time to reflect, just like Elton John. Plus, you get to be a rocket (wo)man, and that’s a major achievement.

Your long journey is almost over, and now it’s time for the most thrilling, anticipated, and terrifying part: landing back on Earth. If Schilling’s fast beat and chilling narrative of “Major Tom” don’t make your heart race, then I don’t understand you. (Also recommended: the English version of Schilling’s song, but not the Boom-bastic remix. And don’t forget David Bowie while you’re floating in a tin can.)

The moment you land, everyone who stayed on Earth will want to know all about what your journey was like. They’re also likely to be quite emotional — especially after the drama of “Major Tom.” The best way to prepare for both of these is with the classic song by Train.

10. M83, “Midnight City”
Now imagine: you’ve been back on Earth for a while, so now you’re nostalgically reflecting on your time among the stars. You’ll be standing in the city again, looking up at the blurred stars — the “mutated skyline” — at midnight, and suddenly, you’ll be “Waiting for the right time / Waiting in a car / Waiting for a ride in the dark” so that you can head off to space again. M83’s rhythmic synthesizer and elements of jazz capture this emotion perfectly. 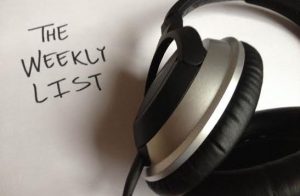