Gifted: A Disjointed and Emotional Journey 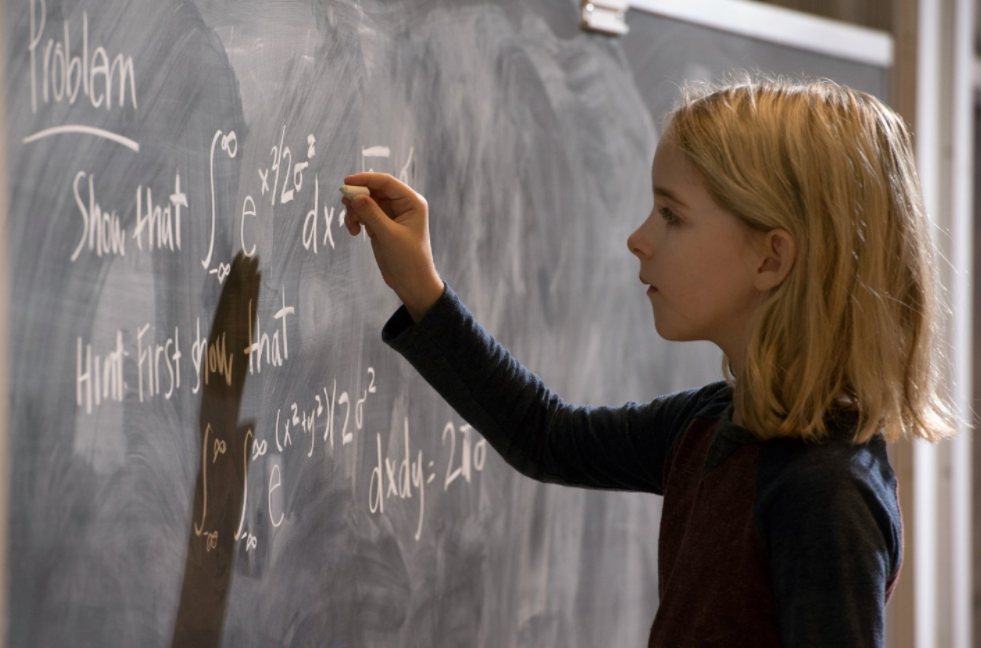 The opening shots of Gifted resemble a sunny home video documenting the first day of school. Seven-year-old Mary Adler (McKenna Grace) scowls over her breakfast at her bearded and rumpled uncle Frank (Chris Evans) as a one-eyed cat lounges nearby. The cinematography is light and airy, and the dynamic between Grace and Evans is undeniably charming. Though the film is later riddled with meandering plotlines and mismatched sequences, its strength lies in the simple scenes—especially those between Grace and Evans. The dynamic cast propels the movie forward and creates an emotionally satisfying experience, despite the film’s unfocused nature.

Gifted marks director Marc Webb’s return to smaller projects from his previous works, 2012’s The Amazing Spider-Man and its sequel, but the return is not extremely successful. Perhaps Webb has not completely left behind his Hollywood habits, since instances of overdramatization and predictability can be found in this family drama. There is nothing significant or innovative about Webb’s style, and the drawn-out storyline of Gifted detracts from its potential for a greater emotional impact.

The film follows child math prodigy Mary Adler and her family’s battle over her upbringing and education. Frank insists that his niece have the opportunity to be a kid, leading him to turn down a scholarship for Mary at a prestigious school for “gifted” students. His humble means and living conditions draw concern from his mother Evelyn (Lindsay Duncan), who wants full custody of Mary. Throughout the film, Frank’s rationale for attempting to give Mary a normal life in spite of her remarkable talent becomes clear: the looming memory of Diane (Mary’s mother and Frank’s sister) serves as a reminder of the price of greatness. Diane, a renowned and celebrated mathematician, took her life when Mary was a baby. Though dead, Diane continues to influence the family’s decisions regarding the care of her daughter.

At its core, Gifted does a fine job depicting the conflict that both Frank and Evelyn face. During one of the many court sequences, Evelyn makes a convincing case as for why Mary should be her responsibility. The resources and tutors that Evelyn could provide would ensure that Mary’s genius would not go wasted. However, Frank’s arguments are also persuasive. He cites Diane’s isolation and total immersion in mathematics as possible factors for her troubled state of mind.

Lindsay Duncan’s portrayal of Evelyn is perhaps the most noteworthy performance, displaying the complexity of Evelyn’s situation and adding dimensions to her seemingly cold personality. In court, Evelyn passionately defends herself from the lawyer’s attacks on her parenting styles, stating that her relationship with Diane “transcended the mother-daughter norms.” Evelyn saw Diane not only as a daughter, but also as an individual with the capacity to change the field of mathematics and impact countless lives.

Grace’s portrayal of Mary Adler is unexpectedly believable. The 10-year-old actress is able to capture Mary’s frustration and fear in losing her uncle, as well as the excitement in exploring the new world her grandmother has presented to her. Evans also deserves praise for his depiction of the quiet and conflicted uncle, which perfectly compliments Grace’s portrayal of Mary. It is refreshing to see him shed his Captain America persona in favor for a much more emotionally complex and dynamic character. His chemistry with Jenny Slate, who plays Mary’s teacher, lends a humorous and romantic element to the film. The cast also includes Octavia Spencer as the friendly neighbor Roberta—who happens to be Mary’s best friend. Though Spencer is a minor character, her late-night lip sync sessions with Mary are hard to forget.

Despite the stellar group of actors, Gifted clearly has trouble achieving a cohesive structure. The plot is at times rambling and disconnected, especially as the story becomes unnecessarily complex in regards to Diane’s history. Webb’s irregular use of tragedy and family comedy only serves to further highlight the disjointed nature of the film. Although some scenes are genuinely moving, like the one in which Frank leaves Mary, other sequences seem forced and contrived. It is easy to notice Webb’s attempt at creating a moving scene in the sequence where Frank brings Mary to the hospital to observe other families celebrating the birth of their child. The scene’s blatant use as an emotional provocation and its general lack of contribution to the plot detracts from the natural sentimentality of the movie.

Although Gifted may not be a momentous success, it has its merits. The chemistry that Grace and Evans are able to establish between their characters is perhaps the highlight of the film. There are some truly touching moments between Mary and her family members, which effectively highlight the complex sentiments that Frank and Evelyn are experiencing. When Frank walks away from a sobbing Mary after placing her in the care of a foster family, there is likely no dry eye in the house. While Webb may have overcompensated in his efforts at making a sensitive movie, Gifted represents his promising return to more complex and profound projects.