Home » By The Numbers » Born from Quirky Comedy, Brigsby Bear is Warm and Fuzzy 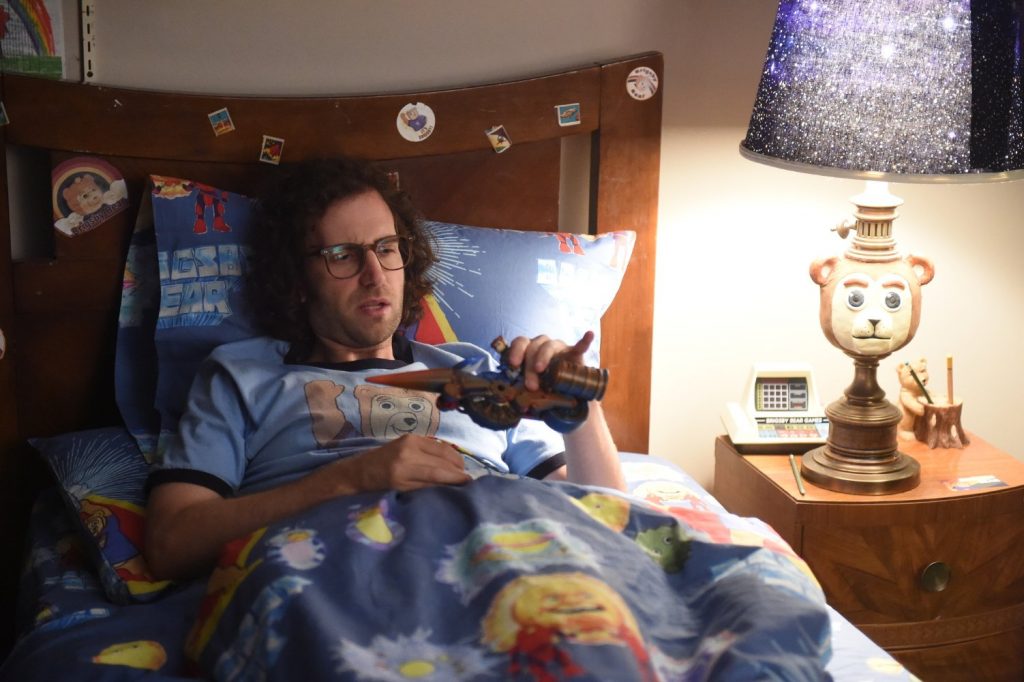 Brigsby Bear Adventures — an off-kilter mishmash of Teletubbies and Barney — is such a constant in the life of 25-year-old James (Kyle Mooney) it borders on a religion. Day after day, James plops down in front of his old fashioned TV and absorbs the show’s peculiar aphorisms as the titular animatronic bear solves math problems and foils the maniacal Sunsnatcher. Besides a small online community of Brigsby Bear Adventures fans and his parents Ted and April (Mark Hamill and Jane Adams), James is completely alone. Interaction with others is difficult when the toxic air of the post-apocalypse requires a gas mask.

(It’s more fun to see Brigsby Bear, directed by SNL segment director Dave McCary and produced by The Lonely Island, without knowing much else besides this strange setup. I owe it to a refreshingly minimalist trailer for granting me that experience. That being said, this review will address the entirety of the film, so here is your official spoiler alert.)

Just as we’re settling into the quirks of this world, the FBI breaks into the bunker and arrests James’ parents, whisking the disoriented young man away. It turns out Ted and April kidnapped James as a baby and manufactured Brigsby Bear Adventures and the online community of fans exclusively for him; no one else knows every episode by heart like James does. His Brigsby references falling flat on mystified ears, James reluctantly moves in with his overjoyed birth parents (Michaela Watkins and Matt Walsh) and sullen sister (Aubrey Pope.) This situation could be a feel-bad framework, but mercifully Brigsby Bear shares only an iota of DNA with the 2015 drama Room. (When asked if Ted and April ever “touched” him, James lists all the times his kidnappers came into physical contact with him, a lightly comic way to to assure audiences that the disturbing hypotheticals of James’ situation aren’t on the table.)

The film is strongest when  capitalizing on the fish-out-of-water scenarios afforded by its premise. James gamely attends his first party and has predictably disastrous first encounters with drugs and sex. He goes to see a movie in a theater and makes his first friend (an endearing Jorge Lendeborg Jr.). Brigsby is still a fixture in James’ life — the bulk of the film revolves around his attempt to conclude the talking bear’s narrative arc with an epic homemade movie — but watching the growing importance of living, breathing human beings in James life is satisfying, if not entirely original.

When asked about his budding movie star status in advance of the July 11 Landmark E Street screening, Mooney brushed the label off, deadpanning “I’m not Dwayne the Rock Johnson.” And thank goodness for that. With his mop of curly brown hair and graceless physicality — traits the bald and brawny Rock can lay no claim to — Mooney delivers an effective blend of cringeworthy and sweet moments in his portrayal of James. Whether James is clumsily repeating slang (“It’s dope-as-shit-man”) or typing full sentences into Google (Complete with a well-mannered thank you), Mooney’s oddball brand of humor is buoyed by the editor’s own spot-on comedic timing.

Some reviews have dubbed the film too twee and bemoan the fact it doesn’t live up to the potential of its ambitiously weird premise. Greg Kinnear’s Detective Vogel, a former Shakespearean actor turned police officer assigned to James’ case, embodies this critique. The detective steals some Brigsby props so the young man can realize his directorial dreams and eventually dons a ridiculous stick-on beard to act in James’ conclusion to the franchise, all because he remembers how great it is to do what you love. A plot line as unabashedly cutesy as that feels more at home in the carefully cultivated world of Wes Anderson than in a scrappy little indie flick.

While a grittier Brisgby would undoubtedly be more interesting, there is a different kind of pleasure to be found in the film’s simplicity. A naturalistic montage in the mountains featuring James cavorting with his band of new teenage friends is self-indulgent — Mooney and McCarey, childhood friends, have acknowledged the film’s meta roots — but the innocent joy of the group’s journey is catching. Brigsby Bear doesn’t offer realism — its function isn’t to lay bare the repercussions of James’ stunted emotional growth or his problematic hook up with an underage girl. Instead, the film is a nostalgic celebration of movies and a sweet sendup of the weird kids who make them. And that’s just enough.