Home » Leisure » The Beguiled Exploits the Intersection of Gender and Desire 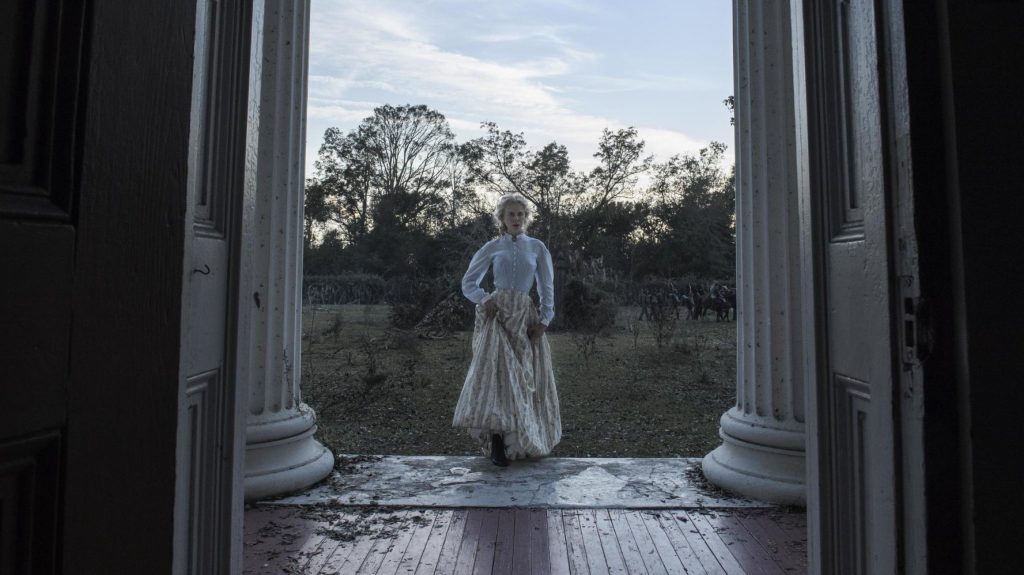 A braided girl (Oona Laurence) hunts for mushrooms in the dark soil, humming a war song as canons smoke in the distance. Taken separately, the shots of her quiet footsteps and the whirr of cicadas are innocent enough, but within the cocoon of Spanish moss, a sneaking dread percolates. Suddenly, the young woman—who we learn later to be Amy, a student of Miss Farnsworth’s Seminary for Young Ladies—spies the placating gestures of a badly wounded Union soldier (Colin Farrell). After a less-than wary exchange with the man (Amy is the plucky one), she helps Corporal John McBurney limp in the direction of her school that now houses six other women relegated to a life of boring routine. And so McBurney slouches towards Bethlehem to be born.

A remake of the pulpy original starring Clint Eastwood, Sofia Coppola’s Beguiled studies the consequences of Amy’s benevolence: surely, when a charming enemy disrupts the lives of seven lonely women, the center cannot hold. Everything that assumably won Coppola Best Director at this year’s Cannes Film Festival (she is only the second woman to take the prize) is here in the first scene, minus her understated handling of sexual tension. (Thankfully, Amy is too young for her relationship with McBurney to have any icky connotations.) Though some may take issue with her more interpretive take on the psychodrama and pine for Don Seigal’s sensationalist storytelling, Coppola balances the gothic nature of her premise with a stripped-down, naturally-lit vision that teases out the emotional ambiguity of its characters.

One of the benefits of Coppola’s adaptation—and one of the reasons the film is being heralded as feminist—is that its eight characters are fleshed out as complex human beings, albeit in a muted palette. As Martha Farnsworth, Nicole Kidman is a dignified force. Equal parts protective maternal figure and no-nonsense headmistress, Miss Farnsworth remains the traditional man of the house even after McBurney’s arrival. It is she who performs two stomach-turning medical procedures; it is she who greets mysterious knocks at the door with a gun behind her back. When violence threatens her domain, the girls turn to her darting eyes for answers. Miss Farnsworth is not without her own desires, though, and Kidman gives Martha’s weakness a human vulnerability, clearing a hurdle that has taken out many a sex-starved movie matron.

Kirsten Dunst—Coppola’s longtime friend and collaborator—is given less to do as school teacher Edwina Dabney though she still manages to bring some chutzpah to the table as the film barrels to its end. But for most of the film, Miss Dabney is sad and tired so Dunst is sad and tired, her mouth in a slight, perpetual frown. It’s hard to blame Miss Dabney for falling hard for the sensitive McBurney when he is understood to be an escape from her dull life of French conjugations and Miss Farnsworth’s commands. (Elle Fanning’s teenage Alicia is in the same boat, though it’s hard to excuse her lustful bids at McBurney since the girl is so damn calculated about it.) Even Farrell’s McBurney, oftentimes the default villain, has moments of genuine kindness.

After weighty consideration of the interplay between lust and power, The Beguiled still finds time to be funny. Predictably, its humor is subdued and mostly ironic—a darkly comic juxtaposition of shots at the film’s climax has the ladies stock-still and expressionless as the  unthinkable happens at the other end of the table—and it adds nicely to the film’s wink and nod beginnings in pulp. There is a world of comic relief in Kidman’s raised eyebrow, or Fanning’s suggestive head tilt, or even a beautifully composed shot of the women in frame, blanched necks and candlelight in all, posturing expectantly under McBurney’s male gaze.

It is to the film’s credit that I forgot about the thorny politics of portraying Confederate women as subversive feminist heroes until I walked out of the theater. Barring a passing reference to “the Cause,” no word even resembling slavery passes from the cast’s lily white lips, allowing the audience to imagine these women in an alternative history devoid of the violent racism that so defined the Confederate South. On the one hand, it might be unfair to ask Coppola to address late-19th century Virginian race relations head-on when The Beguiled is so clearly aimed at exploring gender and desire. From this perspective, the Civil War is just a convenient way to facilitate contact between an isolated group of women and a rakish enemy. On the other hand, The Beguiled encourages sympathy towards these women without giving the audience a chance to know the darks depths of their Southern pride—an omission that seems unwise. “It seems the enemy is not what we believe,” says Miss Farnsworth to her charges, acknowledging McBurney’s humanity underneath his Union garb. How interesting—and challenging—it would have been if the film explored the women’s Confederate complicity in similar shades of gray.

Though it may not have been a historically accurate portrayal, The Beguiled is still a gorgeous, well-acted thrill. Though she retains a bit of lurid playfulness, Coppola does well by adding a dose of complexity to her characters as they grapple with their baser instincts. In her carefully curated and contained universe, Coppola ends The Beguiled where it begins. As the camera pans out slowly from the school’s black iron gate, its remaining inhabitants pose motionless at the front of the house before the film cuts to black, closing a narrative circle so perfectly that there exists a feeling akin to relief, even as the line between antagonist and protagonist blurs beyond recognition.