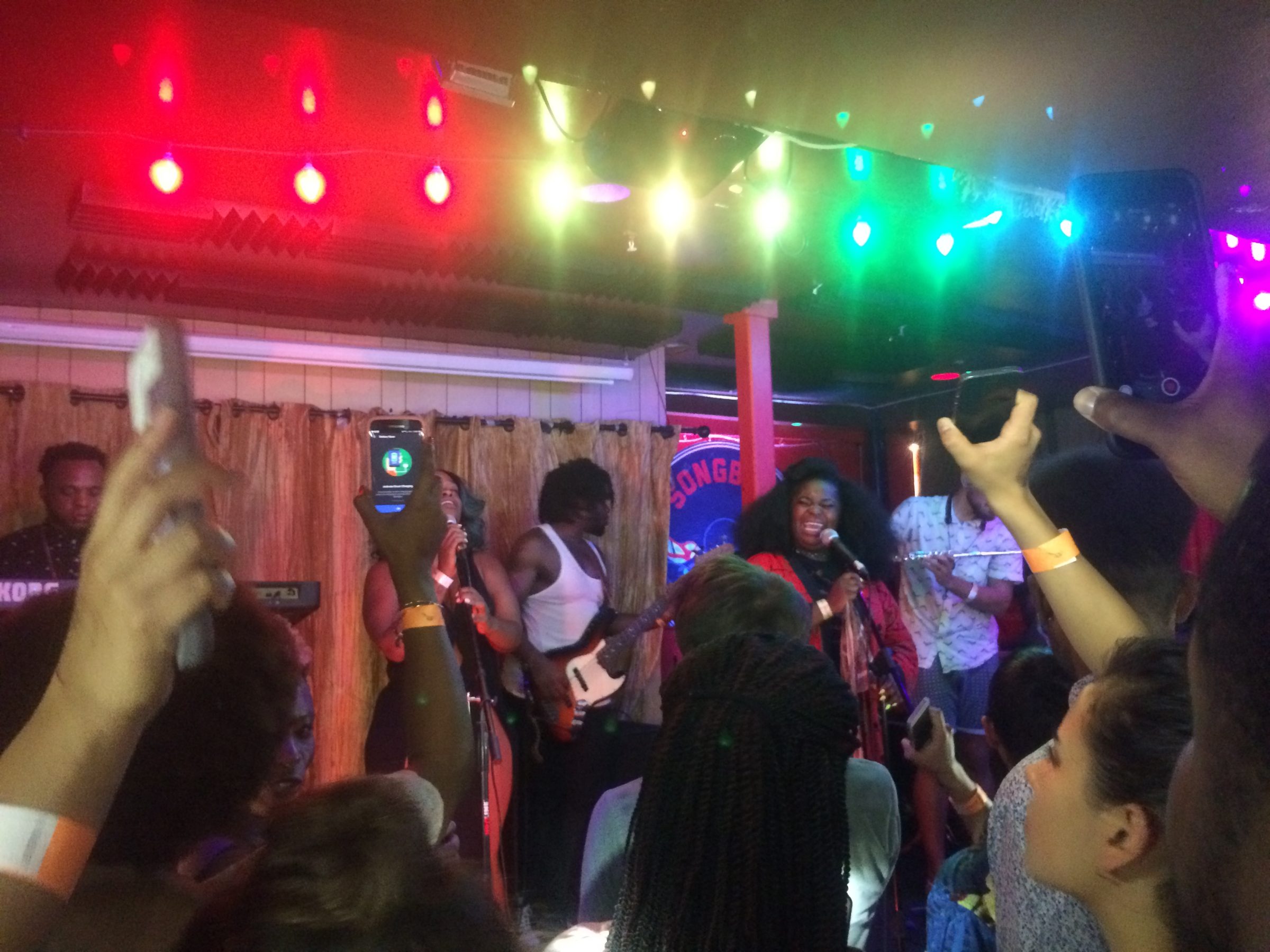 The must-watch video that won Tank and The Bangas NPR’s 2017 Tiny Desk Contest offers just a fraction of the contagious energy they brought to their concert at Adams Morgan’s Songbyrd Record Cafe and Music House on July 21. And considering how irresistibly joyful the video is, that’s saying something. With front woman Tarriona “Tank” Ball blazing the way and fellow New Orleans band Sweet Crude in tow as their opener, Tank and the Bangas capitalized on Songbyrd’s snug venue to deliver a show that all but proved the magical power of live music.

Before Tank and Co. took over the basement stage to perform their distinct fusion of rap, funk, soul, jazz, and spoken word, Sweet Crude battled sound issues and charmed the crowd with an exuberant set. Self-described on their website as “drum pop Louisianais”, the band sings in both English and Louisiana French and forgoes a guitar in favor of percussive sounds. Jack Craft, Stephen McDonald, Skyler Stroup, and Marion Tortorice join lead vocalists Sam Craft (Jack’s brother) and Alexis Marceaux to round out the six-person group.

Sweet Crude’s big, buoyant music does well by live performance. Their Songbyrd appearance highlighted jubilant foot stompers like “Weather the Waves” and the synthy “Laces” — all which feature raucous band-wide harmonizations and a whimsical sensibility. The moodier “Mon Esprit” had Marceaux belting the song’s chorus to loud appreciation from the crowd while the rollicking “On est Paré” brought the band’s chemistry to the forefront. Tank and the Bangas would be hard pressed to find an opener more on message. Playful, unique, and loyal to their roots, Sweet Crude served up happy hipster havoc.

However well that aforementioned Tiny Desk entry captured Tank and the Bangas’ larger than life spirit, there is nothing like seeing them live. Even though Songbyrd is intimate, the six person band wasn’t cramped — there was still plenty of room for Tank to twerk and for saxophonist Albert Allenback to reluctantly prance around at her behest. (Bandmembers Joshua Johnson, Norman Spence, Merrell Burkett, Joe Johnson, and Angelika “Jelly” Joseph filled out the rest of the stage with their respective brass and strings.) If anything, the relatively tight squeeze meant the audience was wholly a part of the show, though I’m convinced that the band’s personality would reach even the Verizon Center’s nosebleeds.

The band came out of the gates fast with their boisterous single “Quick” — the song they submitted to NPR — and a cover of Anderson .Paak’s “Come Down,” both which got the audience bouncing. Because the band samples so many different genres, merely listening to their more upbeat tracks can be a chaotic experience. Luckily, a live performance allows Tank and the Bangas to provide context through expression and movements; as a result, narrative songs like “Quick” were a lot more fun to digest live than listening alone. The mellower “Boxes and Squares” and “Rollercoasters” occupy the other side of the musical spectrum. Dulcet and pared-down, both songs feature spoken word and harken back to Tank’s roots as a poet. Live, Tank was a minister preaching to a passionate flock. “You are important,” she intoned, to shouts and noises of approval.

Tank seems so at home in front of an audience that every move looks effortless. Though certainly likable and earnest, Craft and Marceaux of Sweet Crude can’t hold a candle to Tank when it comes to stage presence; her sparking charisma is fascinating to see at work. Because not only is Tank singing, rapping, and riffing with backup vocalist Jelly; she’s also acting — mugging, contorting, and emoting for an invisible camera. “I make this shit look easy” she rapped at one point. Braggadocio, maybe, yet also an undeniable fact.

If Tank’s stage persona is eccentric and all over the place, Jelly is her perfect foil. Much more than a mere bystander, Jelly sang and grooved at the front of the stage with Tank, smiling on from her side like she can’t believe her friend just went and did that. Jelly played an integral role in channelling the crowd’s hype and her easy rapport with both Tank and the audience was a centering force in a vortex of crazy.

Despite Tank’s confession that she “doesn’t know all the words,” Tank and the Bangas closed their official set with a stripped-down cover of OutKast’s “Hey Ya”, capping off a night of enthusiastic engagement with a song written for audience participation. Tank and Jelly repeated words of thanks, pointing and waving at individual members of the swaying, sweating crowd as the song wound to its close. (In response to five minutes of noisy, defiant pleads from the audience, the band returned to the stage to perform their hit “Soup.”)

When Tank and the Bangas finally left the stage for good, the emotional high they left in their wake remained. I hauled myself up Songbyrd’s basement steps into the muggy D.C. summer night knowing I had just witnessed immense, generous talent. The concert was a testament to not only Tank and the Bangas’ inventive technical skill, but also to their irrepressibly fun-loving core. And with a combination that winning, it’s hard not to grin. 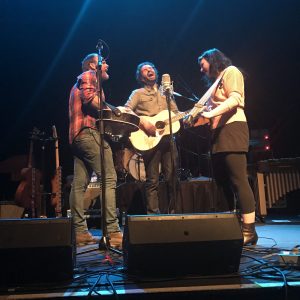