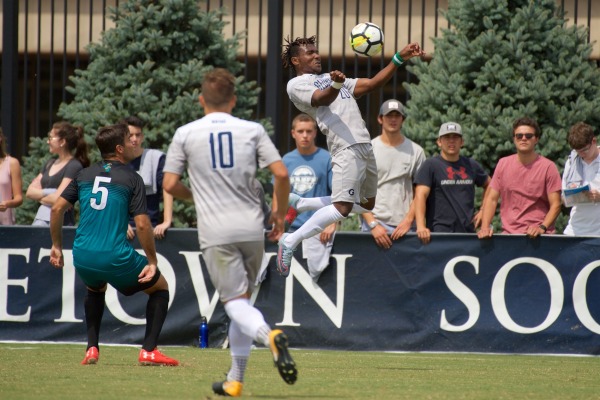 The game started with frenetic pace, as both teams struggled to maintain possession for any sustained period of time. After 10 minutes however, the Hoyas began to control the ball, particularly in the middle third of the field.

“They were switching formations between a four-man back and a three-man back,” Lema said after the game. “We got our guys high and wide and were able to switch the ball well. We found good angles and played with [junior goalkeeper] JT [Marcinkowski] in the back and our center backs.”

With chippy play throughout the beginning of the game, it was fitting that the game’s first goal came from a penalty kick. In the fifteenth minute, Lema was awarded a penalty after being brought down in the Coastal Carolina box. The senior calmly placed the ball on the spot and fired the shot into the top left portion of the goal. The ball hit the crossbar before crossing the goal line, but it was good enough to give Lema and Georgetown a 1-0 lead.

“It feels incredible,” Lema said when asked about his first goal of the season. “It’s been a long time coming and hopefully I can get some more goals this season.”

Georgetown dominated possession for the rest of the first half, resulting in six corner kicks. Just before the half, Lema was again involved in a scoring play when he played a corner into the box. The initial cross was cleared, but Lema regained possession and fired another low cross into the box.

“When I took the touch, I saw all of their defenders running near-post. So, I decided to pass it in behind them… Luckily, Schropp was there and got a good touch to it and banged it in,” said Lema.

After the first period, Georgetown had recorded 11 shots, including five on goal, while Coastal Carolina managed just two shot, with none hitting their target. The second-half, however, was much more closely contested, as the Chanticleers were much more aggressive with their attack. In this period, it was Coastal Carolina who won six corners, while the Hoyas won only one. While the Chanticleers generated more chances, they were never able to turn these opportunities into points. The team’s best chance of the game came on a counter-attack. Achara’s chip-shot was saved midway through the second-half, and Coastal Carolina quickly looked to attack. Senior forward Frantzdy Pierrot, who recorded three shots on the day, got an open look at goal, but his attempt hit the crossbar.

The Blue and Gray remained composed, however, and Achara added the team’s third goal in the 80th minute on a breakaway opportunity. Through their first two games of the season, the Hoyas have scored five goals. Last year, it took the team nine games to reach that same mark.

“Last year feels like a decade ago,” said Georgetown Head Coach Brian Wiese. “We just have different pieces this year. I think there’s a lot more confidence in some of the attacking pieces. We have some young guys that give you something exciting… This season we’ve got Achara and [senior forward] Zach Knudson, who are more seasoned players and healthy.”

The Hoyas will hope to continue their potent attack on Friday at home against Cal Poly (0-2, Big West). The game will kick-off at 4:00 pm. 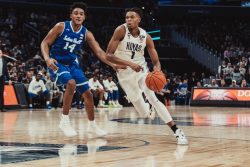 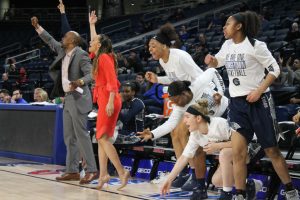 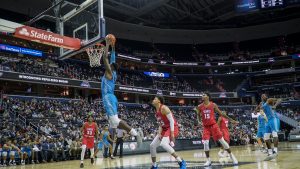