Trailer Takes: 9/11, Jigsaw, and The Mountain Between Us

Brynn: I don’t think I would watch this movie for free, forget paying to see it in theaters or as a rental. Aside from the fact that it will be a horrible Hollywoodized reduction of the tragedies that occurred on 9/11, the movie by itself just looks bad. The plot has the potential to be interesting but it is diminished by cheesy acting and lousy special effects. It is difficult to take the trailer even slightly seriously when each frame looks like it has been edited using the Instagram vignette filter. I doubt that even the presence of Whoopi Goldberg and Charlie Sheen can salvage the film. Having big-name actors might alleviate a minute bit of the audience’s suffering throughout what looks to be an awful movie but certainly won’t change the fact that the ratings will probably flop.

Dajour: My first thought after watching this trailer was, “why?” Why does this movie even exist? What purpose does it serve? Judging from the trailer, it does not look like the directing or the writing has anything worthwhile or new to say about the tragedy the movie is based on, so I’m struggling to see why this is even a thing. I’m not even sure who the movie’s target audience is and it seems that whoever put this trailer together isn’t sure either or simply does not care. The sound is off, the editing is mediocre at best and the acting – oh wow, the acting. Whoopi Goldberg is an Academy Award winning actress. Let that sink in. Above all though, the worst thing about this isn’t the terrible performances or editing. It’s the fact that this movie just looks pointless.

Brynn: Evidently, seven Saw movies could not encompass all of the horrific Saw traps to be conjured up by the twisted minds of the producers. Almost a decade after the movie series seemingly ended, a new sequence of blood and violence will hit theaters at the perfect moment, just days before Halloween. Because Jigsaw will be released right in the midst of the spookiest time of year, there is a better chance that audiences will actually make the effort to see this at the movie theater. However, at any other point in the year, I would tag this as a rental. The excessive gore is not unique on any scale, but if the “traps” are original at all there might be a dim light at the end of the tunnel for this film. The one redeeming factor is the plotline of Jigsaw’s character. I have minimal interest in seeing people’s necks sliced or heads bolted, but I am curious to find out how Jigsaw is somehow back from the dead (if he actually is). Aside from the possibility that the creators have done something fascinating with Jigsaw’s character development, there is little that sets this apart from the other cheap-looking horror films that will be watched for shocks and screams during Halloween season.

Dajour: I have managed to go my entire life without seeing one single Saw film in it’s entirety, partly because it never interested me and partly because I am a punk. It’s been years since the last one came out and I am not nearly as terrified by horror as I used to be. That being said, this trailer did not interest me very much. That might be because I have no connection to or knowledge of the prior Saw movies, but the trailer didn’t really do anything to set itself apart from any other incredibly basic horror movie that I have come to expect during October. The only thing the movie has going for it, and what I expect will get people into theaters, is that this is a Saw movie, something the trailer is not shy about. I will say though, if I was to see this movie it would be for the laughs. Rather than being scary, I actually found the trailer quite funny. The scene where the guy says “No, that’s not creepy at all,” after seeing the little puppet actually made me chuckle. And I get the sense that this trailer wants people to laugh. So, I’m not too invested in seeing this movie but I’m not entirely against it either.

The Mountain Between Us: https://www.youtube.com/watch?v=Mu41hu1a_8c

Brynn: I can already tell that I will spend the majority of this movie trying to figure out whether Kate Winslet or Idris Elba survives the plight back to safety. In my opinion, to let them both survive would be too trite but to kill them both off would be cruel to the audience. So, who will it be? Winslet, with her budding journalism career and fiancé back home, or Elba, with a family awaiting his return? I have a feeling Winslet, being a changed woman (and possibly having fallen in love with the man who helped save her life), will make it back alive and call off her wedding to pursue some neat new initiative. Then again, in the trailer, Winslet is the one who pushes to take risks to get to the bottom of the mountain while Elba wants to edge on the cautious side. I can see an ending where Elba survives, knowing that he owes it all to a woman who taught him to be bold and brave. Either way, there are bound to be gripping adventure scenes paired with classic Hollywood heartfelt moments that will make for an entertaining drama without being mind-boggling. I fully expect it to be ridden with clichés.

Dajour: I love Idris Elba and Kate Winslet. They are both phenomenal actors and the idea alone of them being in a movie together having to play off one another is enough to make me want to see the movie. Unfortunately, that is the only thing about this that intrigues me. This trailer was incredibly dull. Even the big scene where their plane is crashing was just boring. There is nothing interesting about the way it is shot or edited and I don’t feel scared the way I probably should in a plane crash scene. It’s possible that that scene will be much more exciting in the actual movie, but for the purposes of this trailer it did nothing for me. As for the rest of the trailer, there just isn’t much to say about it. Nothing really sticks out. It’s not incompetently done at all, it looks like a very well made movie. It’s just completely forgettable. I’m struggling to remember what I just watched and that’s not a good sign. But, Kate Winslet and Idris Elba are in it, so I’ll probably still see it.

More: 9/11, Jigsaw, The Mountain Between Us, trailer takes 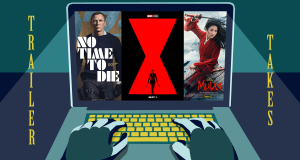