Georgetown’s Journey Toward Diversity in STEM 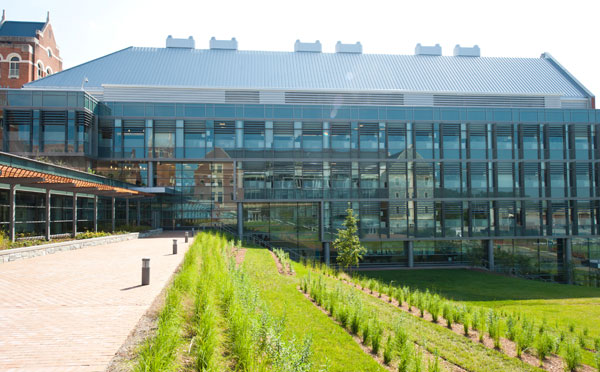 Georgetown alumna Vera Rubin never received a Nobel Prize for her groundbreaking evidence of dark matter, much to the shock of the science world. Rubin, who passed away last year, spent her life advocating for young women to work in the sciences and has become a role model for young students. Her effort to improve the historic underrepresentation of women and people of color in the sciences has not gone unnoticed on the Hilltop. Georgetown stands above the national averages in terms of the representation of women, but advancing diversity across science, technology, engineering, and mathematics (commonly abbreviated STEM) remains a challenge.

The breakdown of enrollment data at Georgetown remains incomplete. The Office of Admissions does not have information on the racial demographics of science majors. Furthermore, Georgetown is better known for fields of science in which women are more highly represented nationally, such as medicine. The fact that the majority of undergraduate students at Georgetown are female also affects these statistics.

“The biggest difference in Georgetown versus any other schools is that we don’t have engineering,” said Charles Deacon, Georgetown University Dean of Admissions. “Engineering would be a huge impact on the STEM numbers overall because that’s a significant number of students which we don’t have. So that puts us in the case of primarily having STEM programs in areas where the majority of women apply.”

Deacon also noted that the name of the School of Nursing and Health Studies may disproportionately attract women, due to the feminine connotation of “nursing.” He explained that women tend to have high representation in pre-med programs, and underrepresentation in more quantitative fields.

“What some studies say is that [among] female students, it’s more important to them to be able to see connections to societal issues, and helping society, helping other people, and so physics somehow, the way it’s portrayed in popular culture, doesn’t come off as being that,” Liu said.

Dr. Lisa Singh, a professor in the Department of Computer Science at Georgetown, echoed a similar concern about attracting young women to her field, in which women are particularly underrepresented.

The issue compounds the lack of exposure most women have to computer science. In particular, Singh referenced a study indicating that girls who have not been exposed to computer science by middle school have more trouble grasping the topic. To increase interest and improve diversity in the computer science field, Singh has worked extensively to establish and lead GU Women Coders, or GU WeCode.

“What’s happening is, because we have fewer women and less diversity in computer science and many of the technological fields, the types of products that we get are not geared towards women a lot of the time—they’re geared towards men,” Singh said. “And I think if we want to actually be part of the innovation cycle, we need to be part of learning the field.”

In the two years since its founding, GU WeCode has expanded from just 50 members to several hundred, spanning across different schools and majors. Each semester, GU WeCode hosts computer science lectures on basic programming and panels of female technological professionals. The women who attend range in majors from computer science, to business, to English, every student recognizing the integral role of technology in a variety of disciplines in the modern world.

Since GU WeCode was founded in 2010, the number of women majoring in computer science has risen from 15 percent to 44 percent in the class of 2021, one of the highest rates in the nation.

Stemme, or Georgetown Women in STEM, is another student organization specifically aimed at building a community of female scientists. The club meets every two to three weeks, plans regular panels with STEM professionals, and hosts workshops for skills such as resume building.

“I think it’s important, as soon as possible, to get involved with other women in STEM. Rather than seeing every other person as a competitor, it’s important to think of each other as more of a team, to spin ideas off of each other, to develop as a network,” said Eileen Cahill (COL ’18), the Stemme Vice President of Professional Development. “Because individually … we’re not nearly as strong as we are in a group, like Georgetown Stemme.”

In addition to student groups, the university also offers formal programs and scholarships for women and minorities in the sciences. One of these is the Clare Boothe Luce scholarship, a program that gives scholarships to women pursuing STEM degrees and subsidizes the salaries of starting female faculty. Luce, a former U.S. congresswoman, ambassador, and writer, left an endowment in her will to encourage women to join STEM fields, especially those studying at or working in Catholic institutions.

According to Sonia Jacobson, director of the Georgetown University Research Opportunities Program (GUROP), the scholarship focuses on STEM fields where women are historically underrepresented: The health sciences were excluded from the program in Luce’s will, and biology and chemistry majors increasingly do not meet the criteria set forth in the scholarship’s guidelines.

“If you’re a lower income, first generation student from maybe a rural high school where maybe you didn’t have classes with labs but you were a straight-A student, if you go to a state university and you want to be a doctor, you’ll get through,” Deacon said. “If you come here, you’re facing classrooms full of students who had BC Calculus, two AP sciences, and 750 on the SATs, and so on.”

“Students in the sciences will often complain about how many hours they’re in class and how hard we grade. They’re in class more hours and on this campus, along with everywhere else in the country … [and] the average grade awarded in science classes is lower than the average grade awarded in other disciplines,” said Dr. Heidi Elmendorf, director of undergraduate studies in biology. She further explained that the difficulty level disproportionately impacts students who lack a strong scientific background from high school.

The difficulty of classes and lack of institutional support can sometimes lead to students changing their major.

“If you’re not making a good connection with a faculty member and the class is really hard and you’re not doing very well, it’s kind of human nature to switch to a major where you’ve got smaller classes,” she said.

Programs such as the Regents Science Scholars Program seek to lessen the burden on incoming freshman. Students in the program take a summer bridge course in science between their high school graduation and freshman year at Georgetown. The students also have the opportunity to conduct mentored research and then to continue that research into the fall of their rst year on campus.

“I find that through my peers I can relate and acknowledge that things may be patchy or difficult, but not impossible, and many of these peers are also from the Regents program,” said Stephanie Galvan (COL ’20), a neuroscience major in the Regents Science Scholars Program.

In just a few years, the number of CSP students in STEM majors has increased from only five to almost 30 students out of 75 total in the program, pulling the program’s percentage of students majoring in science closer to that of the university as a whole.

The program, led by Professor Elmendorf, has also increased the university’s confidence in accepting students from disadvantaged high school backgrounds, helping to improve socioeconomic diversity at Georgetown and particularly in the sciences.

“The admissions committee, for example, has to struggle with whether or not to say yes to a student in that [disadvantaged] situation, because they don’t know that that student’s going to have the capacity to make it through the very demanding program despite the fact that they’re a very good candidate otherwise,” Deacon said. “By having this program that Dr. Elmendorf is working on in place now, our admissions committee has a greater sense of confidence that this is going to work.”

Beyond the experience in the classroom and the lab, the Regents Science Scholars Program works to build a support network among the students and faculty. Likewise, the physics department, Georgetown’s smallest STEM major, emphasizes group work inside and outside the classroom, working to build a team mentality, and hosts small picnic events outside of class to build a welcoming community.

“When I first became chair, we were going through one of those low periods [of female representation in physics], and it really alarmed me. I did try to work hard to try and attract more female students to physics,” Liu said. She went on to explain that some female students start to feel isolated when their female peers drop the major. “We have worked hard in the physics department to create an environment where I think there’s a sense of community, that’s focused on collaboration rather than competition between students.”

The sense of teamwork often serves as a powerful defense against the bias that women frequently face in science.

“My peers, colleagues, and mentors have all made me feel incredibly welcome here and have been supportive throughout the entirety of my time here,” said Alana Lelo, a sixth-year MD and biology PhD candidate at Georgetown, describing the support that her male colleagues have shown women in STEM. “About a month ago, an anonymous person had posted a gender-biased comment on a flyer in our building. Not only were all the voices of the department loud, some of the loudest voices were that of my male peers and colleagues. That behavior, while it may pervade in this world still, is absolutely not tolerated at Georgetown.”

“Generally speaking, I think Georgetown is doing a good job sending out the message that there’s no room for racism, biased behavior, and sexism,” Sakhaei said. “At least in the chemistry department, I haven’t experienced any situation in which I feel like I can’t get what I want just because I’m a woman.”

Even given a generally receptive climate and the numerous student organizations and scholarship programs, Georgetown’s path to parity is not a guarantee.

“I don’t think we’ve yet reached the stage where we can assume diversity will occur,” Singh said. “We’re all moving in the right direction, and that’s really good, but we’re not there yet.”

Correction: A previous version of this article incorrectly called Professor Lisa Singh an associate professor. She was promoted to a full professor effective Aug. 1, 2017.