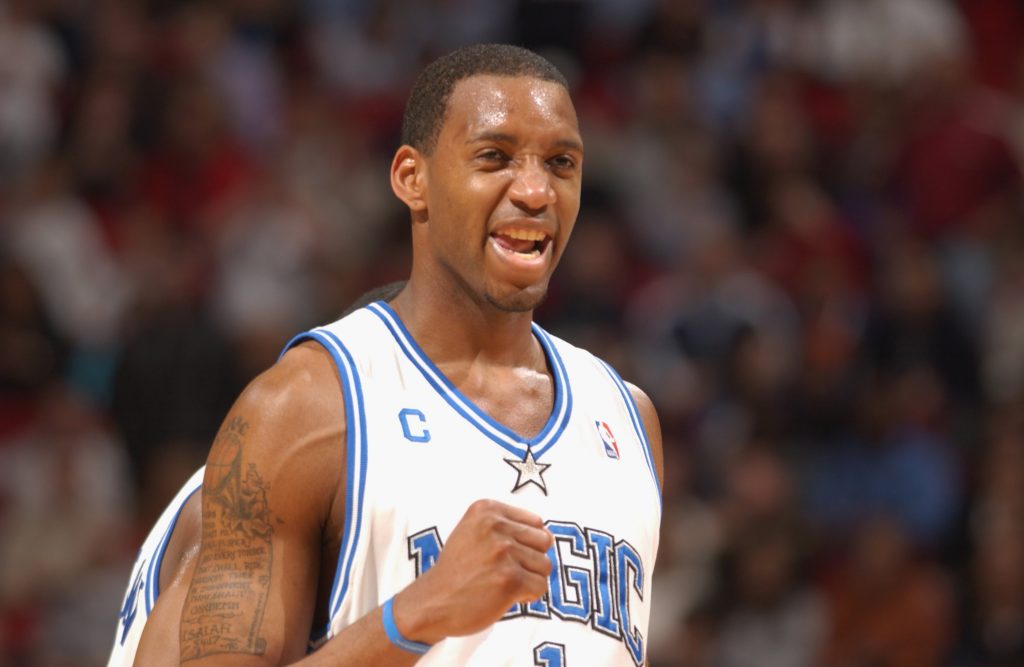 Tracy McGrady: A testament to ability over production

This past Friday, the Basketball Hall of Fame inducted Tracy McGrady, honoring a remarkable player with the sports equivalent of putting the tastiest possible cherry on top of a career sundae. Much of the chatter from the talking heads of the sports world over the last couple weeks has sought to put his tantalizing yet often debated body of work into words. Was he a truly great player or the victim of a tragic tale about untapped potential and ultimately a disappointment?

It is an unenviable task due to the indescribable nature of his career. As sports fans, we attempt to satisfy our organizational urges by making a subconscious effort to think of basketball careers as fitting into certain molds. There’s the Greg Oden mold of the player who has seemingly limitless potential, but fails to make any significant impact in the NBA. You have the Brandon Roy mold of the player who has seemingly limitless potential and produces at an elite level for a couple of years before succumbing to a premature nosedive in abilities due to injuries among other factors. Then, of course, at the pinnacle of success, is the Kobe Bryant model of a player that has the potential and undoubtedly lives up to it, becoming one of the most productive players of all time. McGrady’s career does not match up neatly with any of these molds.

That hasn’t stopped sports pundits from trying to fit him into one ever since the 2009 season, when his abilities began to decline. He has been exhaustively grouped with other injury-ridden superstars for years, such as Penny Hardaway, Grant Hill, and yes, even Roy. The truth is that he does not fit into the mold of the injury-ridden superstar who could have been so much more.  This is because he was simply on another level of greatness compared with any other player who could be described as such. Basketball fans have an enormous tendency to judge players exclusively based on their production rather than on their abilities. We are far more concerned with the outcomes than with appreciating greatness when we see it. McGrady was one of the most skilled basketball players to ever play the game and it’s not as if we never got a chance to witness it. We have the proof. We don’t have to worry about what could have been because we saw what Tracy McGrady was.

As most ’90s kids who follow basketball will tell you, one of the great sports debates of our childhood was over determining the better shooting guard, Kobe or T-Mac. This may come as a surprise now, but people tend to forget how truly elite McGrady was during the seven year stretch from the 2000-01 to the 2006-07 seasons. According to Basketball Reference, during that span, he averaged 27 points per game along with 6.6 boards and 5.4 assists. That alone is impressive, but does not even include a glance at the defensive side of the ball, where he averaged 1.5 steals and 1 block per game as a 6-foot-8 shooting guard. His defensive numbers were even more impressive earlier on his career when he teamed up with his cousin Vince Carter in Toronto and formed one of the most exciting wing pairs in NBA history.  With the Raptors in the 1999-00 season, he averaged 1.9 blocks per game, the most ever for a non-big. We tend to think of McGrady as a pure scorer, but as Jeff Van Gundy put it, he was “an unbelievable defender.”

That being said, it is his offensive skill set which has always garnered the universal acclaim. In the 2002-03 season, arguably his best, McGrady led the league in both scoring and win-shares per 48 minutes. He likely would have taken the MVP trophy that year over Tim Duncan had his Orlando Magic squad won just a few more games. During the seven-year span alluded to above, he consistently ranked in the top 10 in win-shares per 48 minutes and made the All-Star Team each year.

Still, McGrady has his critics. Many claim that his prime was too short for him to be considered a basketball legend. Others point to the fact that none of his teams ever progressed past the first round of the playoffs. Having longevity in the NBA requires a ton of things to go right and it simply did not work out for McGrady. His knee, back, and elbow never treated him kindly and, when they ultimately failed him, he was no longer able to compete at a high level. The same can be said for his notorious first round exits. It simply did not work out for him. His teams never had lineups truly worthy of contention and, when they came close, injuries to key second fiddles and McGrady himself put an end to any title hopes.

Despite not having elite longevity or outstanding team success, McGrady’s individual brilliance was clear each time he stepped on the court. T-Mac’s greatness can be measured through his greatest moments. In the 2002 All-Star Game, he performed one of the most memorable plays in the game’s history tossing an alley-oop to himself off the glass. In a 2003 first round playoff game against the Milwaukee Bucks, the same year he won the Most Improved Player award, he dropped 42 points, 10 rebounds, and 8 assists. The next year he notched a triple double while scoring a career-high 62 points in a game against the Washington Wizards. With the Houston Rockets in a 2005 playoff game against Dallas, T-Mac posterized the Mavericks’ 7-foot-6 center, Shawn Bradley, in one of the greatest dunks in playoff history.

Perhaps his greatest moment came on December 9th, 2004 in a regular season game against the San Antonio Spurs. With the Rockets down 76-68, McGrady scored 13 points in 35 seconds to win the game 81-80 in the most impressive display of skill ever by an individual in a half-minute of an NBA game. He made four consecutive three-pointers, each more impressive than the last, continuously escaping the elite perimeter defense of Bruce Bowen.

As we honor McGrady’s hall of fame career, I highly encourage the reader to revisit this incredible half-minute. It highlights everything that made T-Mac so great. During the sequence, he embodied clutchness, athleticism, elite defense, creativity, and, of course, unmatched ability as a scorer. This was T-Mac at his very best and, no matter how often he displayed these attributes, we knew it was not a fluke when it happened.

The extent of his greatness shone through during his frequent memorable moments, when he was able to flaunt his full capabilities as a player. In the end, McGrady may not lay claim to the written accomplishments of other legendary players, but those who watched him put his skills on display know of his status as one of the most talented players of his generation.