Battle of the Sexes employs a largely impractical structure to tell the story of how two tennis giants of opposite sexes went head-to-head in a legendary match in 1973. Starring Emma Stone as tennis legend and feminist icon Billie Jean King and Steve Carell as the openly chauvinistic, retired tennis champion Bobby Riggs, the movie introduces the audience to its protagonists in two separate stories concerning each individual at different points in their lives. Although these are compelling stories, their paths do not cross until more than 50 minutes into the movie, making the initial scenes seem like watching two distinct, unrelated films. For everything that makes this sports biopic frustrating, however, there are just enough moments of brilliance scattered throughout and an exhilarating final act that make the experience worthwhile.

The audience first meets Billie Jean King in the early ‘70s as she had just become the biggest female tennis player in the world. For those who doubted Stone’s Oscar for her role in La La Land, Battle of the Sexes confirms why she is currently considered one of the finest actresses of her generation. As King, Stone is funny, vulnerable, insecure, fierce, but above all, relatable. King believes that her success may help her achieve equal pay for male and female tennis players. Yet, this endeavor is cut short when she and a group of fellow players are kicked out of the national league when they refuse to accept a lower wage.

The bulk of the film focuses on developing this plotline, where King and her friends decide to create their own tournament. They expect to prove to the men, especially former player and TV commentator Jack Kramer (a hilariously self-justifying and condescending Bill Pullman), that female athletes are just as worthy as their male counterparts.

It is heartwarming and inspiring to watch these women fight for their rights, especially while their personal lives are harder than what their public personas may suggest. This is certainly true for King, who at the time was struggling with her sexuality and her marriage. Andrea Riseborough plays King’s hairdresser and eventual lover in an understated but effective performance that helps the audience understand King’s insecurities and reservations, adding depth to Stone’s character. Conversely, Austin Stowell plays King’s supportive husband, comprehensive and good to a fault. Upon discovering his wife’s infidelity with another woman, he does not lose his poise but rather accepts her and gives her the space to make up her mind.

The other side of the split narrative focuses on Bobby Riggs, a retired tennis player whose boring life has led him to a gambling addiction. He is always looking for something to do and cannot stand being inactive, a formula for comedy gold in the hands of the actor who plays him. Steve Carell is excellent in capturing the eccentric, larger than life persona of Riggs, bringing some of the film’s biggest laughs. His story also includes a subplot regarding his marriage and separation to American socialite Priscilla Wheelan, played by a deliciously cold and amusing Elizabeth Shue, which provides much needed gravitas to Carell’s arc.

The movie suffers from a lack of urgency and intrigue for most of its first half as each protagonist clearly has his and her own conflicts and interests, yet there is no central struggle to make the viewer care about where their shared story is headed. Battle of the Sexes effectively touches upon several timely themes, like gender equality, aging, sexual identity, and addiction, but fails to present a bigger picture of the core battle itself, both in its literal and metaphorical sense.

The protagonists’ stories blend into a single narrative after Riggs’ wife leaves him and he finally decides to call King and request the titular Battle of the Sexes. She initially says no and the movie delves into an unnecessary subplot regarding Riggs’ less famous match against Australian player Margaret Court, King’s main rival. When Court loses, King realizes she needs to teach Riggs a lesson.

By this point the film starts working towards its full potential and we are given a superb montage detailing the behind-the-scenes preparation before the match. On one hand we have King, training daily with assured determination, her mind solely focused on the upcoming match; on the other there is Riggs, who only cares about being in the spotlight and considers the whole ordeal a joke. Once the match arrives, the suspense grips the audience and does not let go until the winner is finally revealed.

The movie perfectly captures the essence of the ‘70s through Mary Zophres’ costumes and Linus Sandgren’s delicate cinematography, featuring grainy dark colors and intimate close-ups. Nicholas Britell’s score is appropriately subtle and understated, creating suitable themes for every situation, without letting its sweeping undertones take over.

Although writer Simon Beaufoy won an Oscar for his work in Slumdog Millionaire, the film’s dialogue lacks a certain spark and wit. Stone and Carell are more than capable performers, but the lines they are given often seem lackluster and trivial. As for the Little Miss Sunshine alumni’s direction, Jonathan Dayton and Valerie Faris direct the film with grace and rhythm, never being showy but always keeping things interesting and compelling. Themes that could have dipped into preachy territory are successfully nuanced and kept under control.

Overall, Battle of the Sexes is an enjoyable crowd-pleaser. It has some fine comedy and its drama remains emotionally engaging throughout. Still, the film suffers from an initially unfocused approach that fortunately does not compromise the entire experience, but it does hinder the film’s ability to create a cohesive and more impactful narrative. Despite its stumbles along the way, the ending offers a satisfying and riveting payoff, perhaps even as grand as the real battle itself.

Correction: A previous version of this article incorrectly started that Margaret Court is British. 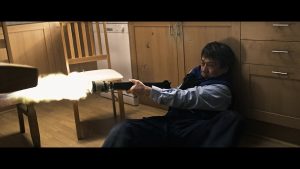