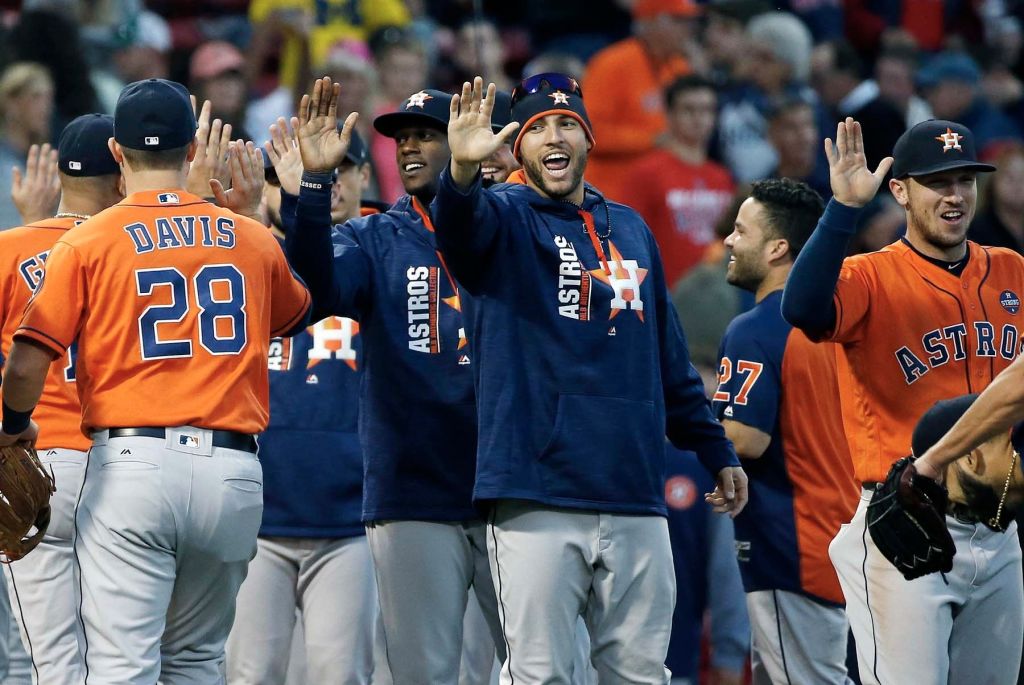 My favorite time of the year is coming up: the MLB playoffs. So here is my overview of each team in the American League and my (maybe) surprising predictions for the AL playoffs.

Coming off a 22-game win streak, the Indians are feeling pretty good about themselves. It seems like every baseball fan has the Tribe winning it all, but like I’ve said, tell me about the win streak once they come home with their rings. With that being said, I do expect them to make a deep run this year. Kluber will probably have another dominant October, and the names on their lineup card can speak for themselves. The bullpen is their greatest strength, and will probably be lights-out yet again.

They have a potent offense and a dominant bullpen, but I still worry about their starting rotation. Kluber is as good as anyone in the game, but the rest of the guys are not exactly aces. Carlos Carrasco is solid, but Trevor Bauer and Josh Tomlin wouldn’t have me that confident if I were an Indians fan. Then again, Bauer and Tomlin started games last year and Terry Francona still found ways to win games by utilizing his relief pieces perfectly. Look out for Andrew Miller to be the proverbial fire extinguisher yet again, but his knee problems could hinder his performance.

In 2014, Sports Illustrated predicted that the Astros would win the 2017 World Series because of their plethora of young talent and prospects at the time. Now, those young players are living up to their potential, and may be on their way to fulfilling that prophecy. The ‘Stros had held the American League’s best record for the majority of this season until the Indians reeled off 22 in a row, and they still pose a serious threat to win the pennant.

Houston’s lineup is virtually hole-free. José Altuve may be on his way to an MVP award, and George Springer and Carlos Correa are among the best in the game. Yuli Gurriel is their usual number 8 hitter, and he’s hitting .297 with 18 bombs on the year. Not too shabby. And their rotation is flat-out filthy. Justin Verlander has pitched to a 1.06 ERA since joining the Astros. That’s barely human, if even. It’s unclear whether Verlander or Keuchel will be the game 1 starter, but manager AJ Hinch can’t make a wrong decision there. Charlie Morton will likely pitch game 3, and if you predicted that he’d pitch in the playoffs with a season ERA of 3.63, stop lying. The slight weakness on this team is the bullpen, which has a few nice pieces in Ken Giles and Chris Devenski, but besides those two is pretty lackluster. But maybe the offense and starters can pick them up.

The Sox might be the most complete team out of the AL. Their rotation arguably has multiple aces, the lineup is star-studded, and the bullpen is dominant. I don’t care about their record or if they’re the 3 seed, because when I look at this roster, I am confident that they have what it takes to take down anyone in the league. The roster has retained just two players, Pedroia and Bogaerts, from their 2013 championship team, but this club may even be better.

Most importantly, they have Chris Sale now. As a baseball fan, I’ve been excited to see Chris Sale in the playoffs for many years. I watch highlights and I see his emotion and his passion. With his talent, he can be dangerous in the playoffs. But Boston’s greatest weakness could still be the rotation. Rick Porcello is talented, but this season has people saying that his Cy Young campaign was a fluke. Drew Pomeranz has had a nice season, but he’s had trouble going deep into games, averaging just above 5 innings per start. Then again, we’ve seen relief pitching become more important than starters in recent years, so maybe the Sox will be fine with mediocre starting pitching.

The Yankees looked like a World Series favorite in the first few months of 2017, but have cooled off and will have to settle for home field advantage in the Wild Card game. They are an interesting team with a mix of young and veteran players. The “Baby Bombers” of Gary Sánchez and Aaron Judge are always threats to leave the yard, as are veterans Todd Frazier and Matt Holliday. Mid-season acquisition Sonny Gray has proved his worth, putting up ace numbers to complement co-ace Luis Severino.

Severino is likely to start the Wild Card game, and he has the stuff to go up against the best in the game. But my Yankee pitcher to watch this postseason is not Severino or Gray. This could be CC Sabathia’s last hurrah as a Yankee or as an MLB pitcher. His contract is up after this year, and at 36, he’s not getting any younger. He has acknowledged that, changing up his game and putting together a solid year. He has been to the postseason before and flat out dominated, so this is nothing new to him. If the Yankees make a deep run, I expect CC to be a big part of that.

Lastly, the Yankees offense is intimidating, but they’ve got a serious strikeout epidemic. And against playoff aces, that problem could be severely exposed. Don’t be surprised if the homer-happy Yanks lineup goes cold in October.

The Twins are easily the most surprising team to make the postseason out of the American League. Last year, they finished 59-103, dead last in the AL Central. Even the Twins doubted their chances at the trade deadline, flipping Jaime Garcia and Brandon Kintzler for prospects. They sat at 50-53 then, but they’ve played to a 33-22 mark since. They’ve already improved their win total by 24 games.

They are an exciting team to watch, with one of the best young offensive cores in all of baseball. Joe Mauer, their leader and former MVP, is the only player in the starting lineup older than 30. Young guns Eddie Rosario and Byron Buxton highlight the offense, along with constant home run threat Brian Dozier. However, the pitching staff may lead to their demise. Ervin Santana will likely pitch the Wild Card game, and he is a great option. He’s experienced the playoffs and he’s put together a nice season, but I can see the bullpen sinking the Twins. They have just two relievers with ERAs under 4, and it is unlikely that Ervin throws a complete game against the Yankees. Even if the Twins win the Wild Card game, the rest of their starters are mediocre at best. But who knows, maybe we’ll see Bartolo “Big Sexy” Colón throw a couple gems in October.

I expect a tight, low-scoring game, with aces Severino and Santana going head to head until their exits around the 7th inning. But Betances and Robertson will keep Minnesota down while the Twins bullpen gives up a few bombs to Judge and Sánchez.

Gray and CC will likely pitch games 1 and 2, with Severino coming back for game 3, which actually sets up well for the Yankees. The Indians will probably go Kluber-Carrasco-Bauer. I give the Yanks an advantage for starting pitching, but Terry Francona will use his bullpen masterfully yet again, nullifying the starters’ possible shortcomings. Furthermore, the Yankees offense will fall flat against the dominant Indians relievers, putting up ridiculous strikeout numbers.

Prediction: Indians over Yankees in 4 games

The Sox and Astros are a really exciting matchup. Both teams have young, star-studded offenses that will go up against some of the best starting pitchers out there. I’d expect games 1 and 2 to be pretty low scoring, but 3 and 4 should have plenty of offense against the weaker starting pitchers. Overall, the series will be close, but the Astros will squeeze it out in the end.

Prediction: Astros over Sox in 5 games

I honestly get goosebumps over the idea of this series. Verlander vs. Kluber. Altuve vs. Lindor. This should be a lot of fun to watch. Both teams have powerful and deep lineups. The Indians have the advantage of the bullpens, and the Astros have the advantage of the rotations. But I think the Indians rotation, aside from Kluber, will underachieve in this series, and the bullpen will be too burnt out to get the job done in the end. Keuchel and Verlander are going to dominate, and some combination of Morton, McCullers, Peacock, and McHugh will be good enough in their starts. Verlander takes home ALCS MVP with two stellar starts, which is unsurprising considering we’ve seen him do it in October before.

Prediction: Astros over Indians in 6 games