A Bright Present and Future for the Boston Celtics 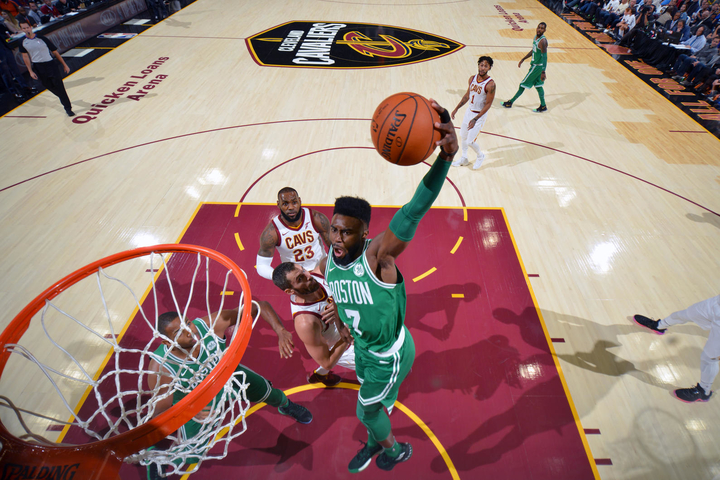 CLEVELAND, OH - OCTOBER 17: Jaylen Brown #7 of the Boston Celtics goes to the basket against the Cleveland Cavaliers on October 17, 2017 at Quicken Loans Arena in Cleveland, Ohio. NOTE TO USER: User expressly acknowledges and agrees that, by downloading and/or using this Photograph, user is consenting to the terms and conditions of the Getty Images License Agreement. Mandatory Copyright Notice: Copyright 2017 NBAE (Photo by Jesse D. Garrabrant/NBAE via Getty Images)

In 2008, the Celtics celebrated as world champions with a 4-2 series win over the Los Angeles Lakers. Paul Pierce, Kevin Garnett, Ray Allen, and Rajon Rondo led the Celtics back to their rightful place as the best NBA team in the world. The 17th championship banner hung from the rafters of TD Garden, and the Celtics paraded down Boylston Street. Since then, the Red Sox, Patriots, and Bruins have all won their respective championships. The Celtics made it back to the finals in 2010, but since then have struggled to get past LeBron James, no matter his team.

Four years ago, in the 2013 offseason, Danny Ainge and the Celtics decided it was time for a change. Doc Rivers left Boston for the Clippers, and Kevin Garnett and Paul Pierce were shipped to the Nets for the Nets’ 2014, 2016, 2017, and 2018 first round picks. With these moves, the Celtics entered what many thought would be a long rebuilding process. Few thought that by 2017, the Celtics would finish first in the East and have the number one pick in the draft to match.

The Celtics were the epitome of an underdog team in the 2016-2017 season. They were scrappy and tough, and they found ways to win even when they had no business winning. With only one all star, standing at 5’9”, the Celtics clawed their way to the number one seed in the East, only to be thwarted by Lebron James, Kyrie Irving, and the rest of the Cleveland Cavaliers.

The Celtics may have been likeable, but the 2016-2017 team, even with the addition of Jayson Tatum, were not champions. As much as the fans wanted them to, in the age of superteams and super players, well-coached second round picks with grit and heart didn’t cut it. So Danny Ainge did what he had to do.

Ainge made a flurry of moves in the 2017 offseason. He began by trading away the number one pick in the draft to Philly for the 3rd pick and the Lakers’ 2018 pick that could turn into the Kings’ 2019 pick. That 3rd pick turned into Tatum. The Celtics also added Semi Ojeleye, Kadeem Allen, and Jabari Bird in the second round, all of whom have made the Celtics final roster. Ainge shipped defensive standout Avery Bradley to Detroit for Marcus Morris to clear up cap space. After rumors of failed trades for Jimmy Butler and Paul George, Ainge, with the help of Brad Stevens, secured free agent Gordon Hayward, which everyone presumed to be the Celtics biggest move of the summer. The Celtics then added Daniel Theiss, Aron Baynes, and Shane Larkin. The roster looked complete.

Then, in August, when the craziness seemed over, Ainge made the biggest move of all, trading away Celtic’s star Isaiah Thomas, enforcer Jae Crowder, up and coming big man Ante Žižić, and the Nets 2018 first round pick for the Cavs’ Kyrie Irving, who wanted out of Cleveland.

This turnover in the roster could prove costly for the Celtics, as the team is full of young players and guys who do not have much experience playing together. Jayson Tatum may not be ready to have a starting role, which with the injury to Marcus Morris looks inevitable. The rebounding struggles that plagued the Celtics last year could continue this season. It could turn out that Kyrie Irving is not a star without LeBron James by his side. Maybe.

Or maybe the overflow of young talent and all star veterans will make this C’s team a title contender. Average players become good, even great, under Steven’s tutelage. What can he do with players that are already great? We’ll have to wait and see. Stevens has now proven he can win in the playoffs, even taking a game from the Cavs without Isiah Thomas. In the four preseason games the Celtics played this year, the young core coming off the bench proved they can provide a depth that will help them past the Wizards and the Raptors in the fight for the top of the East. The Big 3 of Irving, Horford, and Hayward proved that they are exactly what we expect them to be: stars. Baynes, when healthy, should improve the Celtic’s rebounding abilities. Tatum’s teammates cannot seem to say enough about how impressed they are with the rook. Jaylen Brown brings a year of experience to his all-rookie 2nd team performance last year. Marcus Smart is skinny.

Celtics fans are all aboard the hype train.

Is it enough to take down LeBron and his band of 2010 all stars? Or the big bad Warriors in the West? Maybe. But maybe not yet. The good news for the C’s is that Al Horford, at 31, is the oldest player on the team. Soon, there will be an 18th banner hanging from the rafters of TD Garden.