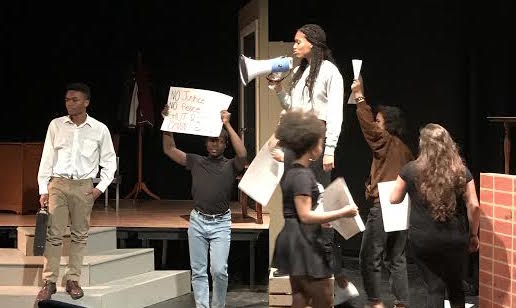 As the old precautionary adage goes: “don’t bite the hand that feeds you.” In other words, demonstrate loyalty to those who have sustained and contributed to the attainment of your successes. To “bite the hand that feeds” would mean to reject your support system. The Black Theater Ensemble’s production of “The Hand That Feeds You” examines the arduous balancing act between loyalty and rejection, praise and criticism, resistance and complacency. The play takes a hard look at the grueling realities of existing as a black body within a predominantly white academic institution.

The fictitious campus of Daniels University is shaken by controversy when audiences are first transported to it. When a black student of the university is brutalized at the hands of the police, Daniels’ students of color protest and clamor to his defense. The play’s fictional setting emphasizes the production’s lack of locational specificity, ultimately contributing to its impressions of universality and everywhere-ness. Sure enough, police brutality can and does happen all around the country. While “The Hand That Feeds You” addresses racial tension and police brutality as they pertain to Daniels University, the events of the play could have just as easily occurred and been applied elsewhere, whether fictional or nonfictional. Each character and their situation proves to be authentically relatable, and the story on which they embark is not limited to the constraints of time or locale.

At the forefront of these student led protests, audiences are introduced to one of the play’s two principal characters, Nathaniel “Nate” Martin (Donovan Taylor MSB ’20). Outspoken and spirited, Nate finds companionship with another student who shares in his passion for social activism, Angie Stone (Fatima Dyfan COL ’21). Both characters are young visionaries, and their shared passion for advocacy becomes the very basis of their friendship.

Audience members weave through time over the course of the performance, as the evolution of Nate and Angie’s relationship is observed over the span of several years. The play traces their shared history from motivated undergraduate activists to their careers as professors at Daniels University. In many ways, the play’s past events parallel those of the present, proving that just as much as things change, they stay the same. Professors Nate and Angie observe that a new generation of student activists have risen to combat the very same issues they had hoped to resolve as undergraduates years ago. Still, even though their years of activism have proven futile to improving the racial climate of the campus, the two find solace in each other’s dogged commitment to the cause of racial progress. The relationship between Nate and Angie is the most developed of any characters, and the evolution (and possible disintegration) of their friendship drives the play’s plot.

Despite having similar interests and passions, Nate and Angie come to understand that incongruities in their fundamental ideologies may prevent them from ever seeing eye-to-eye on some of the issues most important to them. This creates a seemingly irreparable rift in the dynamic of their friendship. Over the course of the play, the two employ contrasting methods of balancing their personal commitments with their professional ones, their activism with their professions.

Enthralled by the prospects of receiving tenure and professional advancement, Nate grows increasingly detached from the activist yearnings of his adolescence. He instead favors a more low-profile approach that would entail combating the university’s racial problems from the inside. Alternatively, Angie remains just as passionate about her advocacy as she had been as a student at Daniels all those years ago. She is willing to advocate for what she believes in, even if it is at the expense of her career and livelihood. This dichotomy between passive and outright resistance prompts viewers to begin considering whose means of activism are superior. Audiences will grapple with the thought-provoking inquiry: How much would I be willing to sacrifice for the cause?

“The Hand That Feeds You,” will command the audience’s attention from start to finish. Written and directed by Mackenzie Foy (COL ‘19) and Kendell Long (COL ‘19), and produced by Abi Vega (COL ’18), “The Hand That Feeds You” is a topically relevant and poignant social commentary that reminds audiences that progress often entails sacrifice. The characters demonstrate willingness to resist oppressive structures through varying methods and to varying degrees, but ultimately no single method or degree is more right or virtuous than any other. Whether or not Nate and Angie choose to resist outright by ‘biting the hand’ is insignificant. Biting or no biting, audiences can appreciate that both Nate and Angie are not blind to the inequalities perpetuated by the institution that has “fed” and supported their lives.

Bite into “The Hand That Feeds You” before it’s too late. 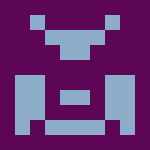