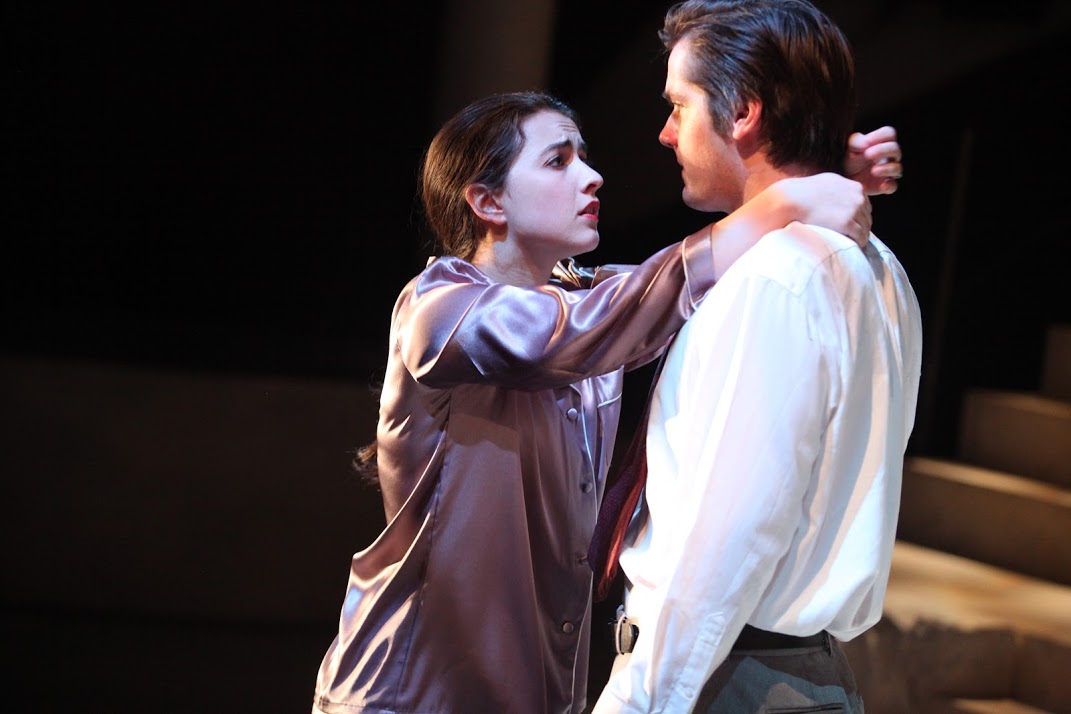 Many students only know Shakespeare’s political drama Julius Caesar from their high school English class, and only remember Marc Antony’s infamous opening line to one of the greatest speeches in theatrical history: “Friends, Romans, countrymen, lend me your ears.” All students would be remiss if they let these two instances be their only interactions with Shakespeare’s timeless work. In the Department of Performing Arts’ rendition of the play, it feels more pertinent than ever, weaving modern technology and costume into the play’s cautionary and incisive themes.

The play follows Shakespeare’s script, but rebalances the cast, making the eventual cabal of conspirators entirely female, while Caesar’s closest allies and most vocal supporters are all male. While this could easily have established broader allegorical meaning behind the two sides, Shakespeare’s script shies away from a straightforward good versus evil dichotomy. Caesar (Charlie Trepany COL ’19) is brash, arrogant, and overconfident, but his friends and supporters are caring, intelligent, and charismatic. Cassius (Kate Ginna COL ’18), the mastermind conspirator, is at turns manipulative and ruthless, and strongly ideological and loyal. Brutus (Eliza Palter COL ’20), a reluctant but crucial motivator of the plot against Caesar, has both deep respect for the man and love for him, while still prioritizing what she sees as the best interests of her country above all.

Drawing such a clear gender separation between the groups is a curious casting decision because characters on both sides are so flawed, and pro-Caesar men do eventually win the civil war; this makes it unclear whether or not the director meant to send a particular message with their casting choices, and what exactly the message would have been. As it is, the choice to cast the sides along stark gender lines fails to make a compelling point about gender politics, and depicts the debate around dictatorship as a gendered issue, which isn’t true in practice.

Like in most productions of Julius Caesar, Caesar’s wife Calpurnia (Paulina Enck SFS ’21) is an emotional lynchpin for the play, bringing humanity into the politicking and whispered conspiracy that dominates the work. She has one of the most memorable scenes in the play, finding the bloodied plinth Caesar died on and wordlessly mopping up her husband’s blood with her scarf. Calpurnia’s grief-stricken resolve is palpable, and in an act of peaceful defiance she wraps herself in the stained scarf, exits slowly, and never returns.

The stage is set showing an empire already in mid-decline, with shattered pillars and dirty granite making up its sparse scenery. This decrepitude hints that the country is well beyond the zenith of its power, eager to surrender itself to dictatorship at the hands of a well-spoken politician. The supporting cast furthers this sense, falling to the rhetoric of whomever stands before them and speaks loudly. In the span of five minutes, they switch from chanting for Caesar, then Brutus, and finally Marc Antony; the play’s message about the effect of rhetoric on the masses makes itself abundantly clear.

Further social commentary is similarly evident, but does not detract from the messages’ poignancy. Julius Caesar has a long history of being rendered to make a political point, with a now infamous recent production portraying Caesar with Trump-like characteristics. The Department for the Performing Arts’ version adds to these warnings by intimately weaving technology into the script. The senators break from their conspiring to check their phones; Marc Antony creates a kill list by scrolling through social media-esque headshots; the warring factions come to rhetorical blows over Facetime; every major speech, as well as Caesar’s long, dramatic death, are livestreamed. This integration of modern tools puts the play in a starkly different setting from which it was conceived, reminding audiences again of how relevant its themes still are.

Though the play dabbles in social commentary well, certain elements of the production mar the overall experience. The set establishes a number of different places where action can occur, but the lighting design doesn’t provide a full wash of these spaces, so actors deliver crucial lines from in a shadow, have only part of their face illuminated, or walk around the stage and move in and out of lighted areas. Additionally, some of the sound design seemed inappropriate, for instance when a mob beats a poet named Casca whom they had mistaken as a conspirator,, the scene’s serious message is lost because of the comical popping noise at its climax.

More than 400 years after it was written, Julius Caesar remains one of Shakespeare’s most adaptable and popular plays; the rendition from the Department of Performing Arts is testament to this fact, and stays compelling and thought-provoking by showing Caesar in the modern world.