Mumbo Sauce: The taste of Washington 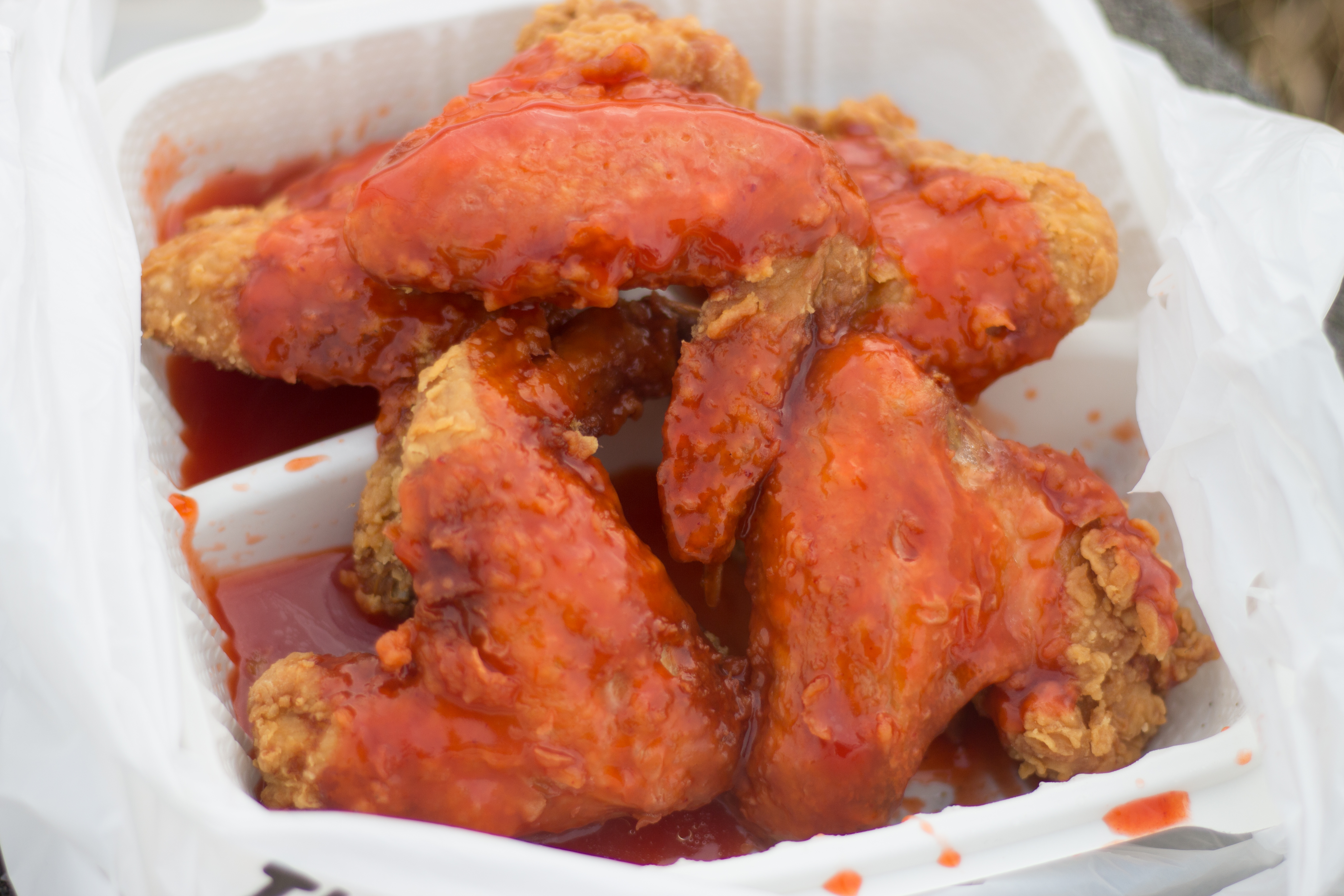 Across the southern United States, regional factions are locked in debate, vying to be named the champions of barbecue. In eastern North Carolina, simple spicy vinegar reigns supreme, while in the western part of the state, the smoked pork shoulder is served with a vinegar and tomato mix. As you move west, the shoulder becomes substituted first for ribs in St. Louis, and then beef brisket in Texas with the thick brown mop sauce with which most Americans are familiar: a mixture of tomato, Worcestershire sauce, and beef stock. In South Carolina, the sauce is mustard-based, while in Alabama, it is white and made of mayonnaise. But Washington, a city perpetually in limbo between the north and the south, is not known for its barbecue.

Instead, there is mumbo sauce.

What exactly is mumbo sauce? There is little consensus. Is it tangier, sweeter, or spicier? Should it be neon orange, ruddy brown, or blood red? Is it even spelled “mumbo” or is it “mambo?” What is clear is that mumbo sauce is fundamentally made of vinegar, tomato paste, and hot sauce, with a flavor and consistency halfway between a tomato-vinegar barbecue sauce and the duck sauce ubiquitous in Chinese-American restaurants.

“A real good one is real complex,” said Jonathan Taub, a classically trained chef and the creative mind behind Bub and Pop’s, a sandwich shop on M Street near Dupont Circle. According to Taub, a taste of mumbo sauce should start sweet and then hit with a punch of vinegar, before finally fading into heat and saltiness.

The proportions, as well as the use of additional flavors, depend on where it’s made. While it can be eaten on anything, its most frequent vehicles are fried chicken wings, french fries, and fried rice. Over the years, it has become a district icon.

There is debate about the origin of mumbo sauce. The trademark on the word “MUMBO” is held by Select Brands, LLC, a Chicago-based company that sells barbecue sauce and has been using the term since 1950. However, the story of Washington’s mumbo sauce began in Chinese carryout restaurants, often located in primarily African-American neighborhoods in the eastern quadrants of the district.

“Many of these restaurants were owned by whites,” said Maurice Jackson, Ph.D., an associate professor of history and African-American studies at Georgetown University who specializes in D.C. culture. “When the riots [of 1968] came, many left. African-Americans couldn’t buy any of these places because they didn’t have the capital, but some of the Chinese immigrants were able to scrape together capital to buy them.”

“One day you were buying a snack and a sandwich, a cold cut or something, and before you knew it, now you’re buying wings and sauce,” said Marcus Douglas, a 42-year Washington resident.

This Chinese-African-American fusion quickly became popular throughout the district.

“The Chinese immigrants have adapted to an African-American tradition,” Jackson said, “and learned to cook things the soul food way.”

The relationship between mumbo purveyors and their clientele isn’t always harmonious though. In most carryout restaurants, a thick layer of plexiglass separates the kitchen and the public area, and a lack of seating indicates that the name “carryout” isn’t a suggestion.

“In some Chinese carryouts, there’s a great appreciation for blacks; in some, there’s not,” Jackson said.

As with the attitudes, the food in each Chinese carryout restaurant is different. Mumbo sauce is clearly always mumbosauce, and the variations are subtle, but try a few and a personal preference will emerge. The neon red-orange sauce at Grand China Carry-Out, on the corner of M Street and South Capitol Street by Nationals Park, is sweet and tangy, without much heat or tomato flavor. At Jerry’s Carryout, at the intersection of Florida and Georgia avenues by the Shaw-Howard University Metro station, the tomato element is especially apparent. And at Good Hope Carry-Out, in Anacostia at the corner of Good Hope Road and Minnesota Avenue, the mumbo is darker in color and a little more reminiscent of a barbecue sauce. One thing they all have in common: Mumbo sauce isn’t on the menu. It is readily available when ordered, but only to those familiar with the scene.

Washington’s demographics are changing. Though once known as “The Chocolate City,” the district dropped below 50 percent black in 2011 for the first time since the ‘60s. Gentrification has taken its toll on the traditional carryout and soul food restaurants.

“As far as I know, there may be only one or two black soul food restaurants left,” Jackson said. “There used to be many when I came in … they’re just gone. A lot of it has to do with not being able to afford where the places were before.”

With that decline, mumbo sauce has had to evolve to survive, finding success outside its original neighborhoods.

Douglas prefers to get his wings and mumbo from a location familiar to many students: Wingo’s, at the intersection of Wisconsin Avenue and O Street in Georgetown.

“Fifteen years ago, we didn’t have mumbo on the menu. We didn’t have the memo. Everyone kept asking me ‘do you have this sauce?,’ so we went out and got it,” said Michael Arthur, the manager of Wingo’s. Now, it’s their best seller.

At Wingo’s, the mumbo sauce is rust orange, with sweet, smoky flavors, and a surprising heat. The unique taste comes from a secret ingredient.

“If you look at the ingredients [of a traditional mumbo sauce], it’s just ketchup, or tomato sauce, vinegar, and hot sauce,” Arthur said. “We tweaked it, because I needed something a little more spicy, so we took it, and added Thai chili peppers.” When Wingo’s first started making mumbo, they carried both a traditional version and the spicier version. After a year, they stopped serving the traditional because there simply wasn’t demand.

While Buffalo wings are traditionally dipped in blue cheese, Arthur recommends pairing mumbo wings with ranch. Ranch might not be a traditional feature of the carryout restaurant, but the creaminess of the dressing complements the crunch of the fried chicken and the heat of the Thai chilies.

As mumbo has entered the culture of the new Washington, more and more commercial mumbo products have emerged on the market. Capital City Company bottles and sells mumbo sauce, with mild and sweet hot varieties appearing on the shelves of district stores. In Columbia, Md., Black Flag Brewing Company even bottles a mumbo sauce beer.

“When me and my friends would go out, we’d have a couple drinks, and then we’d always end up at this carryout place, that has chicken and wings and fries and all that,” said Brian Gaylor, the founder of Black Flag. “The food was junk, but the best part is that they covered it all in mumbo sauce.”

The beer is citrusy, and the slight acidic tang is mildly reminiscent of the sauce. The name mostly comes, however, from the idea that just like carryout food drenched in mumbo sauce, the 8.0 percent ABV double IPA is smothered in hops.

Both the city and the sauce have undergone fundamental changes. But it seems like as long as there’s a District, there will be mumbo.

“If I had friends coming to D.C., and they asked me what to do,” Arthur said, “I would say, ‘Go to the monuments and eat mumbo sauce.’”

Disclaimer: Although Wingo’s advertises with the Voice, this in no way affected the nature of our reporting.

I beg to differ.