Home » By The Numbers » The Saturday Crowd: Examining the fan base of Georgetown football 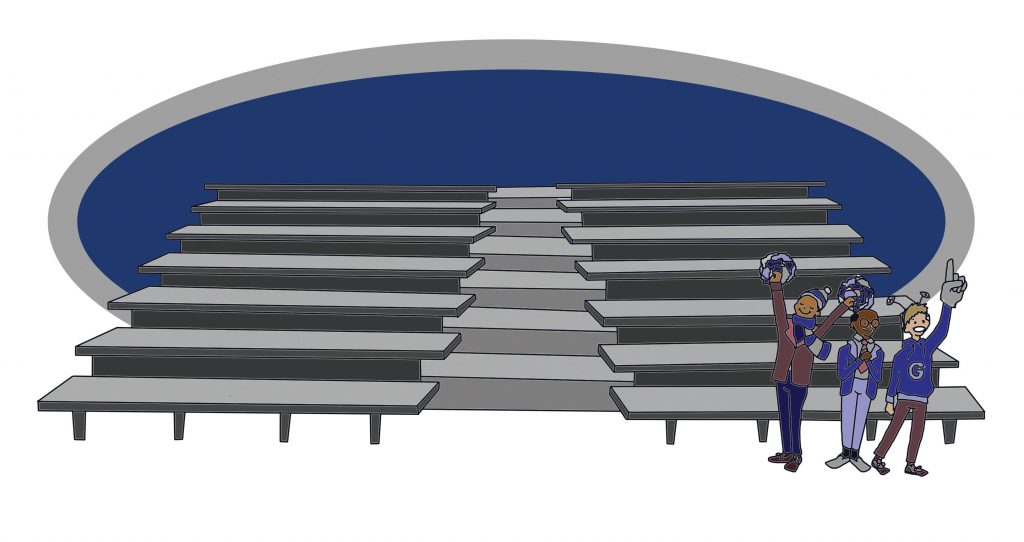 The Saturday Crowd: Examining the fan base of Georgetown football

With just over two minutes remaining in the fourth quarter, wide receiver Tommy Jesson (MSB ’18) hauled in a 38-yard pass along the left sideline, and the Georgetown crowd at Cooper Field erupted into cheers. It was the final game of the season for the Hoyas, a Senior Day matchup against Patriot League counterpart Colgate University.

In the stands along that left sideline, you could find recent Georgetown graduates and former football players supporting their old team. Pockets of current Georgetown students dotted the rest of the mostly older crowd, filling a majority of the 2,500 seats without packing them. At the south end of the stands, a high school pep band played, a replacement for the Georgetown pep band which was away at a men’s basketball game against Maryland Eastern Shore.

A light rain was falling, and Colgate was beating Georgetown 35-10.

Meanwhile, in Nolan Hall inside the nearby Thompson Athletic Center, Bruce Simmons (MSB ’69) was preoccupied. He was helping to prepare a postgame senior reception, where seniors on the team would head after their final game for Georgetown, leaving the Colgate players to celebrate their victory on the field.

Simmons is part of a small group of alumni, mostly former football players, who are especially avid supporters of the football team.

“When you say a fan of Georgetown football, the first guy’s name that comes to mind is Bruce Simmons,” said Georgetown head coach Rob Sgarlata (COL ’94).

A co-captain of the football team in 1968, Simmons is a constant presence around Georgetown football and a well-known figure among current players. “Bruce Simmons is a huge advocate for us. He’d do anything for us,” said quarterback Tim Barnes (MSB ’18). “He’s there for our Thursday walk-throughs, our Friday walk-throughs, and he’s always there for games on the sidelines.”

“Win or lose, that guy is amazing,” added defensive lineman Bryan Jefferson (MSB ’18). “He really is the backbone of Georgetown football.”

Simmons has done more than just offer his support as a fan. He has been involved with the evolution of the football program for more than 20 years. He helped the program transition from Division III to Division I-AA, now called the Football Championship Subdivision (FCS), in 1993 and from Kehoe Field to then-Multi-Sport Field in 2003. He even served as a coach for a week during the 2011 season and more recently brought internet celebrity Dan Bilzerian to a practice.

“On top of being a fan of the program, he has served as a mentor to a countless number of guys,” Sgarlata added. “He takes the time to truly mentor our guys about what their decisions are, what they’re looking at from a perspective of internships and jobs, and what their career path is … It gives those guys kind of a model for what they should be trying to attain once they leave our program.”

From 2009 to 2015, Simmons served as president of the Gridiron Club, the alumni booster club for the football team. “My initial goal was to rekindle the alumni support for the football team, especially among football alumni,” Simmons said. The club now hosts regular tailgates at both home and away football games and fundraises for the Annual Fund for Georgetown Athletics.

“What Bruce did was bring a high level of organization and dedication to every facet of [the Gridiron Club], whether it was parent organization, timeliness, fundraising, relationships with the school, or relationships with the athletic department and ex-players,” said David Goracy (COL ’71), a member of the Gridiron Club and former teammate of Simmons.

Simmons is not the only Georgetown football superfan. Goracy’s fondness for his playing days inspired him to continue to stay involved as an alumnus, hosting postgame receptions for players and their parents that would eventually inspire the Gridiron Club’s tailgate program.

In 2009, Goracy received the J. Gregory Carroll Award, which recognizes service to Georgetown Athletics—Simmons received the award in 2012.

“You have people from the booster club there, and alumni come talk to us. It makes us want to play better,” Barnes said. “You know you have guys from the past who are supporting you, and I think that’s really important.”

Look beyond this relatively small group, however, and the picture of Georgetown football fandom becomes less devoted. An overall absence of enthusiasm for the team and lackluster student attendance at games have been persistent issues.

“From my personal experience in classrooms or interactions with students, it was always kind of like the expectation was for Georgetown to lose,” Jefferson said. “Do people really understand we have a team?”

Barnes felt that student attendance could be better. “I think we can have the students be more involved. I’d love to see a lot more students at the games.”

“I would say football is not probably as high as we’d like it to be. We’re seeing much higher turnout for soccer, even lacrosse I’ve seen some pretty high turnout,” Healy said.

The broader alumni community does not share the Gridiron Club’s enthusiasm about Georgetown football according to Andrew Geiger (COL ’99), who runs the Georgetown men’s basketball blog Casual Hoya.

“Unfortunately, the word I would use is apathetic,” Geiger said.

And it is not just the poor recent performances of the team—eight wins total and two in the Patriot League over the past three seasons—that have caused this indifference.

“No one that I know is upset with the football team,” Geiger continued. “That’s why I use the term apathetic, because people just don’t care enough to be upset.”

Geiger feels that games against weak football schools like Lehigh, Colgate, and Bucknell are not meaningful enough to draw attention. The low stakes for football compared to other Georgetown sports can make it difficult for students and alumni who aren’t already fans to become more involved.

“I don’t know who I would classify as our Georgetown football rival,” Healy said. “We have Syracuse and we have Villanova for basketball. I don’t see the same thing there with football.”

There is a disconnect between the football team and the students, and Healy thinks that a better relationship between the two would be beneficial for both sides. Students would appreciate if the team became more involved with the student body, and the team would benefit from larger interest and attendance.

None of this is to say that Cooper Field is barren during football games. Because of the support from the Gridiron Club and former football players, in addition to parents, many football games still have strong attendance relative to other on-campus sports. In fact, during the 2017 calendar year, Georgetown football had the highest average total attendance of any on-campus sport—men’s basketball plays off-campus at the Capital One Arena.

But a big crowd at a Georgetown football game doesn’t come naturally. Supporters like Simmons and Goracy have to put in a lot of effort to make it happen.

“We don’t have something that’s self-sustained. It’s not like Clemson or Alabama where you wake up next fall and, you know, here we go again. So you really have to almost reinvent the wheel every year,” Goracy said.

For their part, Simmons and Goracy recognize that the fan experience has changed since they were players. Back then, students could drink alcohol in the stands, and beer companies and NFL teams advertised at games. At the 1968 homecoming game, more than 9,000 fans were in attendance.

“The fanbase has changed quite a bit, because that day it was 99.9 percent students and dates, and now it is, I would guess, 65 percent alumni and parents and 35 percent undergrads,” Simmons said.

“It’s a different era, late ’60s, early ’70s,” Goracy added. “Socially it was the thing to do, and Georgetown was vastly male in terms of the population for undergrads.” Women were first allowed into the College of Arts and Sciences in 1969.

To their credit, Simmons and Goracy have brought about changes to the football program that might address some of the reasons for a broader apathy towards the team. Specifically, they, along with Bob Hussey (MSB ’71), a former player, and Rory Quirk (COL ’65, GRD ’71, LAW ’80), who didn’t play football but petitioned the university to revive football at Georgetown while an undergrad, helped establish the Lou Little Cup in 2015. Named after Lou Little, a member of the College Football Hall of Fame who coached at both Georgetown and Columbia, this rivalry game between the two schools is now played every year.

“We proposed that we do this because we need to build a set of traditions in the football program that are real, not made up,” Simmons said.

Still, Simmons and Goracy both feel that improvements can be made to better attract and cater to fans. For Goracy, it is about the on-field results.

“It all starts with if you play better, and if you play a better brand of ball by definition interest will expand,” Goracy said.

Sgarlata also believes that a more successful team would fill more seats at Cooper Field, while Geiger suspects that a winning program would attract otherwise-ambivalent alumni.

For Simmons, the hope for improvement is focused more on the university’s outreach efforts.

“I think we as a university do not promote student attendance at varsity athletic contests as well as we should,” Simmons said. “I believe the university needs to do a much better job of promoting and providing the fan gameday experience at a much higher quality.”

One particular area of frustration for Simmons is homecoming, which he feels has lost its connection to football.

“I do think the students would respond if someone made an effort to include them more openly and make it more fun for them,” Simmons said.

“[Games] I’ve gone to where there’s a higher stake game, nice weather, the pep band is playing, cheers are loud enough that you can hear them, I always have a lot of fun at those games,” Healy said.

Reaching out to alumni and involving them with the team may also prove to be an effective strategy for the university. Even if many alumni aren’t interested in the team now, it doesn’t mean that they don’t want Georgetown football to succeed.

“I think for sure most alumni would like to have a good football team, and if there’s some solution that alumni can come together to donate to, or whatever we need to do to make that happen, I think we certainly would,” Geiger said.

For Simmons and Goracy, their concerns stem from a desire to help their beloved program achieve its potential.

“I just hope we can find a way to give this program what I would consider the resources it deserves so it gets the attention it deserves,” Goracy said. “I really think if we can bring all that together, a football game on a nice Saturday afternoon in the fall—pretty darn good stuff.”