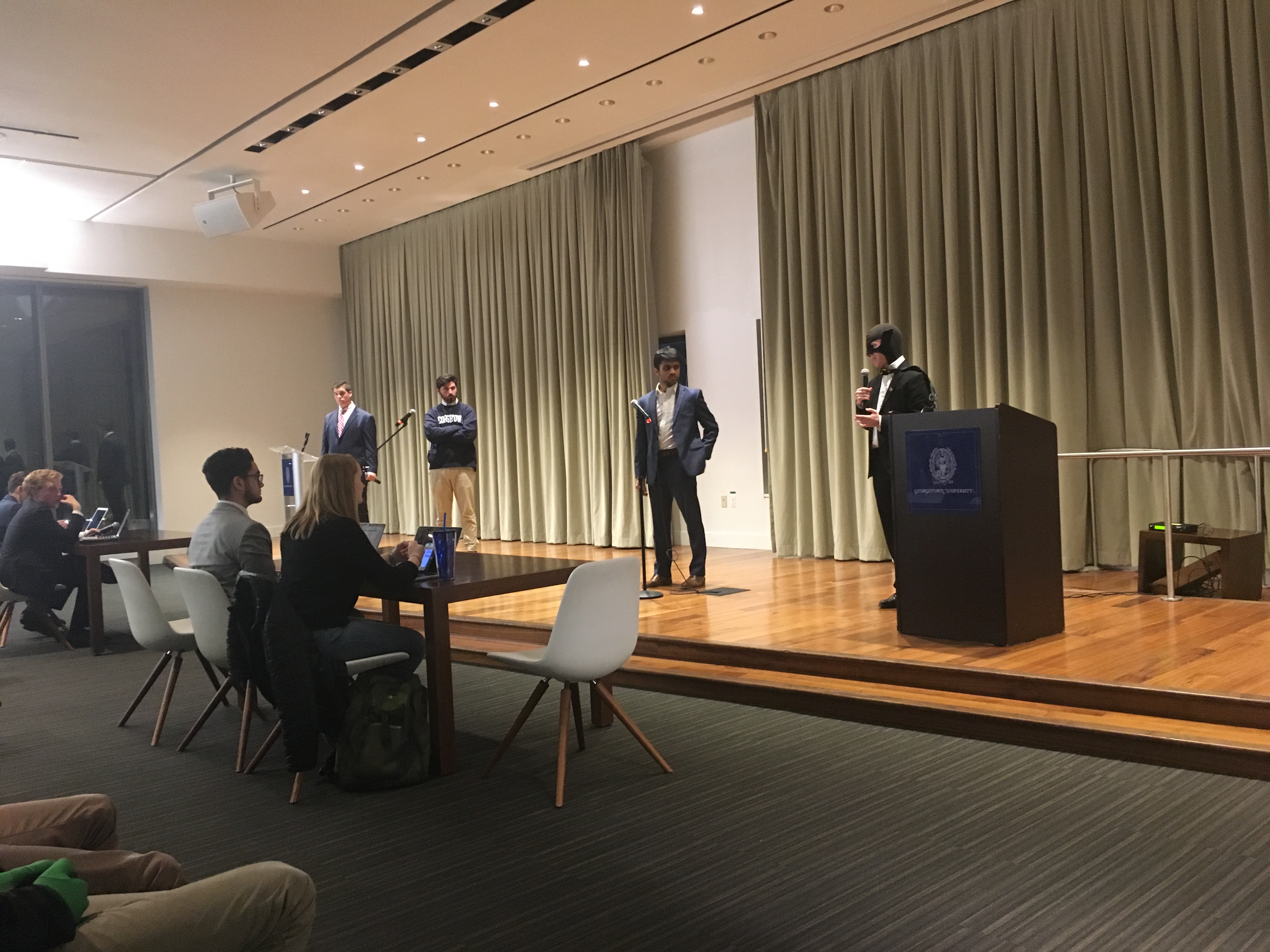 On Feb. 19, four GUSA candidates debated the role of student government in Georgetown student life and influence over the university administration in the GUSA presidential debate.

Josh Sirois (COL ‘20), Hunter Estes (SFS ‘19), Sahil Nair (SFS ‘19), and Logan “Batman” Arkema (COL ‘20) participated in the debate which was moderated by the Election Commission in the Healey Family Student Center. Candidates started by giving a brief opening statement, followed by a period of questions from campus media and the audience.

In their opening statements, candidates outlined their campaign promises and platforms, trying to win over the student body. Sirois spoke on the experience he and his partner, Casey Doherty (COL ‘20), has in moving promises into action. He rebutted the idea that being a GUSA “insider” is necessarily a negative aspect of his candidacy, a common refrain from other tickets like Estes and Nair who have set themselves up as an “outsider” ticket.

“I recognize that GUSA is an asset,” Sirois said. “This campaign isn’t just about discussion, but it is about results.”

Arkema, dressed in a Batman cape and cowl and channeling the Dark Knight’s gravelly voice, encouraged the audience to imagine a scene where incoming students and parents are greeted by “Batman” at New Student Convocation. He said that his goal was not to win the election, but bring the issues he is most passionate about to the forefront, including workers’ rights, as well as challenge the other candidates’ plethora of platforms and lofty goals.

“I realized that real change is institutional, so I joined GUSA,” Arkema said. “Real campus change can come when we focus on the issues and make them a little less about ourselves.”

Estes and Nair both focused on their platforms laid out by their campaigns over the past week and a half and tried to connect to the everyday struggles of students on campus. Estes spoke about his and running mate Richard Howell’s (SFS ‘19) experiences with the rising cost of tuition and financial aid. Nair mentioned how he and his running mate Naba Rahman (SFS ‘19) were some of the only people of color in their hometowns and originally struggled to find their places at Georgetown in freshman year.

The first media question from a representative of The Hoya concerned the candidates’ critiques of the current administration under Kamar Mack (COL ‘19) and Jessica Andino (COL ‘18). Each candidate focused primarily on the lack of communication between GUSA and the student body, as well as internally within the branches of student government. Sirois took the opportunity to again assert that his knowledge as a senator did not preclude his ticket from understanding the apathy of students towards GUSA.

“I would argue that it is valid that there could have been more community and collective student engagement from the GUSA executive administration,” said Sirois. “However, I think if you don’t have a very consistent and operating body as GUSA, we won’t have methods to reach out to other student organizations.”

Media questions from the Voice, The Hoya, and the Georgetown Heckler centered on how the candidates’ administration would support different groups of students on campus, including undocumented students, sexual assault survivors, and descendants of the 272 slaves sold by Georgetown in 1838. While no candidates disagreed that each of these issues and every student would be supported by GUSA, Estes qualified his statements by saying that GUSA was primarily a body for advocacy, not direct policy changes at the university.

“At the end of the day, this isn’t the American Senate,” Estes said, referring to the role of GUSA in terms of undocumented students. “When it comes to concrete steps, we can advocate for students… but beyond that, the student government in itself is limited in its capacity in terms of what it can do.”

Sirois responded to Estes by saying that despite limitations, his administration would do “every damn thing” to support undocumented students, while Batman said that GUSA has the power to organize protests and sit-ins at Capitol Hill to make a bigger impact. Estes took one of his rebuttal periods to respond to the other candidates that the one of the reasons students were apathetic to GUSA was because of the big promises candidates provide during their campaigns that aren’t backed by tangible policy initiatives.

For the question on inclusivity, candidates agreed that GUSA needed to reach out to underrepresented communities on campus and listen to the experiences of those students.

“The solution to inclusivity issues in GUSA is not more GUSA,” Nair said. “Instead, it’s stepping back and giving people spaces to speak for themselves.”

By the end of the debate, each candidate had established the main theme of their campaign: Sirois focused on the experience and understanding he had of GUSA, Estes concentrated on controlling the cost of the university, Nair centered on bolstering the inclusivity of student government, and Arkema fixated on the importance of social justice and practical solutions to student issues from GUSA. After Thursday’s vote, candidates will discover just how persuasive these themes were to the student body. 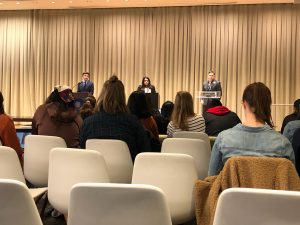