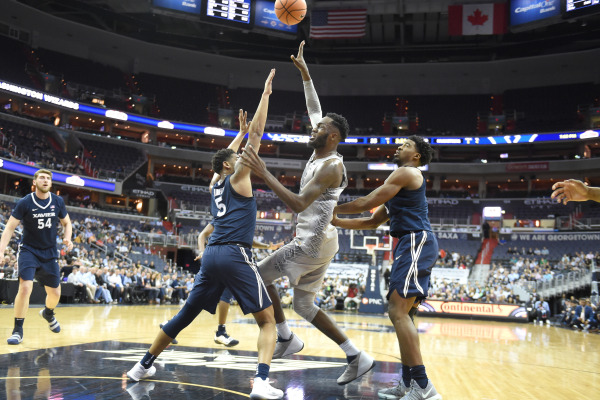 The Georgetown men’s basketball team (15-11, 5-10 Big East) will take on the Providence Friars (17-11, 8-7 Big East) Saturday at the Capital One Arena. The Hoyas look to regain momentum after seeing their two-game win streak snapped by No. 4 Xavier (25-4, 13-3 Big East) in an 89-77 loss on Wednesday, while the Friars seek to keep their slim tournament hopes alive by rebounding from a bizarre defeat to Seton Hall (19-9, 8-7 Big East).

Against Xavier, Georgetown was unable to rekindle the magic that helped them procure back-to-back victories over Seton Hall and Butler (19-10, 9-7 Big East). The Hoyas came out sharp in the first half, taking a 40-38 lead into the halftime break thanks to four three-pointers, including a buzzer-beater, by freshman guard Jamorko Pickett. However, Xavier would come out firing in the second half, opening up a 61-53 lead over Georgetown with 10:48 remaining. While the Hoyas limited Musketeers’ leading scorer Trevon Bluiett to two points on 1-10 shooting, they could not stop freshman forward Naji Marshall, who torched the Blue and Gray for 21 points on 8-10 shooting.

“Bluiett didn’t have as big an impact on the game as he did [in Cincinnati],”  said Georgetown head coach Patrick Ewing. “But it’s like I told the guys: ‘He’s just part of the team.’ They have a good team. They have other guys that can step up which they showed tonight.”

After Musketeers’ sophomore guard Quentin Goodin gave his team a 74-63 lead on a three-pointer with 4:58 remaining, the Hoyas cut the lead below double-digits just once. Junior center Jessie Govan was another bright spot for Georgetown, as he added a double-double with 15 points and 11 rebounds.

While the Friars do not boast the same firepower that the Big East-leading Musketeers do, they have already shown the Hoyas an ability to scrap out improbable wins. On February 7 at the Dunkin’ Donuts Arena, the Hoyas led the Friars by five, with the ball, with under two minutes left in regulation. Providence would finish the game on a 9-0 run, forcing a Hoyas turnover on the final possession to seal a thrilling victory.

Providence is led by junior forward Rodney Bullock, who leads the team in scoring at 14.3 points per game. The Friars are coming off of a loss to Seton Hall, who defeated Providence after the game was initially suspended with 13:03 remaining in the second half because of slippery conditions on the court. The Friars would lose, 89-77, after the game resumed on Thursday at noon.

Tip-off is set for 12 p.m. ET and the game will be broadcast on CBS Sports Network (why). Follow at @GUVoiceSports for game day updates and breaking news. 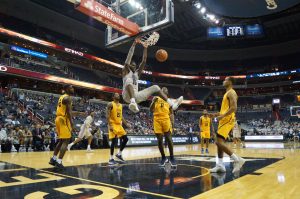