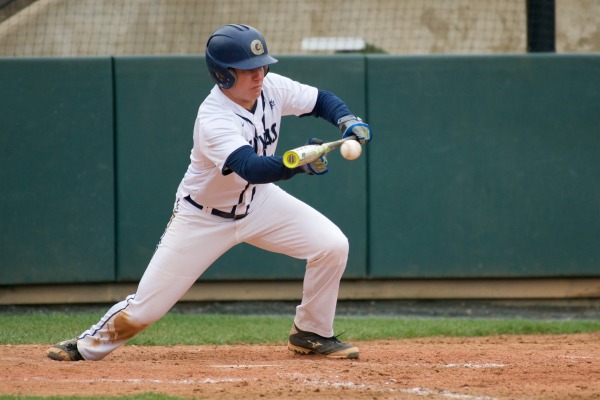 This weekend, the Georgetown men’s baseball team (0-6, Big East) traveled to Davidson, North Carolina, for a three-game series against the Davidson Wildcats (6-1, A-10). In similar fashion to last week, the offense failed to muster up much of anything, and the Hoyas dropped all three games.

On Friday, the Blue & Gray fell 9-2 at the hands of a potent Davidson offense. After a strong start against Wake Forest (3-5, ACC) last Friday, sophomore pitcher Nick Morreale was unable to replicate his past performance. The right-hander lasted only four innings and let up six runs, (four earned) on five hits. After allowing four walks last start, command issues emerged again for Morreale. The sophomore walked five Wildcats and also threw two wild pitches. Junior pitcher Jack Cushing relieved Morreale in the fifth and pitched three strong innings of one-run ball, recording two strikeouts.  Grad student pitcher Connor Cuse allowed two unearned runs in the ninth while walking two and hitting a batter, but the game was more or less out of reach by then.

Sophomore center fielder Ryan M. Davis collected two singles and a stolen base and the Hoyas collected a modest seven hits total, but they were unable to find the clutch hits to bring more runs home. Davidson’s junior starting pitcher Allen Barry was dominant in his five innings of work, allowing just two runs and racking up seven strikeouts. Junior right-hander Casey Sutherland was just as commanding in relief, allowing no runs in four innings to pick up the save.

On Saturday, the Hoyas were overpowered yet again, this time by a score of 16-5. Senior right-hander Kevin Superko started the game on the mound, but did not last very long. Superko got rocked by the Wildcats in just two innings, allowing 10 runs (seven earned) on 10 base hits. Senior pitcher Matt Randolph, senior pitcher Alex Bernauer, and sophomore pitcher Freddy Achecar III combined for six innings of six-run ball, but the game was basically over as soon as it started anyways. The Wildcats put on a home run derby, clubbing six home runs, including two from junior left fielder Justin Lebek.

Despite allowing 16 runs, the offense had a better showing on Saturday. Senior second baseman Jake Bernstein collected two hits, including a two-run homer in the sixth. The home run was Bernstein’s first in 2018. Freshman left fielder James Gabor entered the game as a substitute and went 2-2 at the plate, including a RBI single in the ninth for the first RBI of his career. Senior left hander Evan Roberts had a great start for Davidson. The southpaw threw seven strong innings, allowing three earned runs and recording five strikeouts.

Finally, the Hoyas were unable to salvage the series finale on Sunday. The Wildcats won 10-5, in another convincing victory. After a rough start against Gardner-Webb (7-1, Big South) last Saturday, freshman pitcher Owen Lamon did not fare much better in his second career start. Lamon lasted four innings and gave up five earned runs despite allowing just four hits. Sophomore left hander Brent Killam then relieved Lamon, but was shelled for five earned runs over two innings. Senior pitcher Jimmy Swad and freshman pitcher Beau Dana were able to stop the bleeding with two scoreless innings to close the game out.

Georgetown went down by a 4-1 deficit by the fourth inning, but then put together a nice rally. Consecutive doubles from Davis and senior designated hitter Sammy Stevens sparked the rally, and senior catcher Richie O’Reilly would eventually hit a two-run single to even the game at 5-5. Killam’s implosion in the sixth, however, put the Wildcats up for good, and the Hoya offense was not heard from again. Aside from the fourth inning Georgetown rally, Davidson’s junior right hander Josh Hudson pitched well. Hudson lasted 6.2 innings, and all five runs came in the fourth. Davidson relievers freshman Pete Bloomberg and junior Austin Leonard closed the game out with a combined 2.1 scoreless innings.

Like last weekend, these losses were uncompetitive for the most part. The offense, however, showed improvements with a couple five-run games. The pitching staff will need to do a better job of keeping the game close and giving their bats a chance. Again, command was an issue, and the Hoya arms gave up far too many walks. Despite all this, the season is still young and the team has time to solve these issues.

Georgetown will take the field next on Tuesday, as they take on cross-town rival George Washington (1-5, Atlantic-10). The Colonials are coming off a weekend series at Stetson (6-1, Atlantic Sun), in which they went 1-2. The first pitch is scheduled for 2:30 at George Washington’s Barcroft Park. Follow @GUVoiceSports on Twitter for more updates and breaking news.