Charlie Visconage on Color, Beginnings, and Doing it All 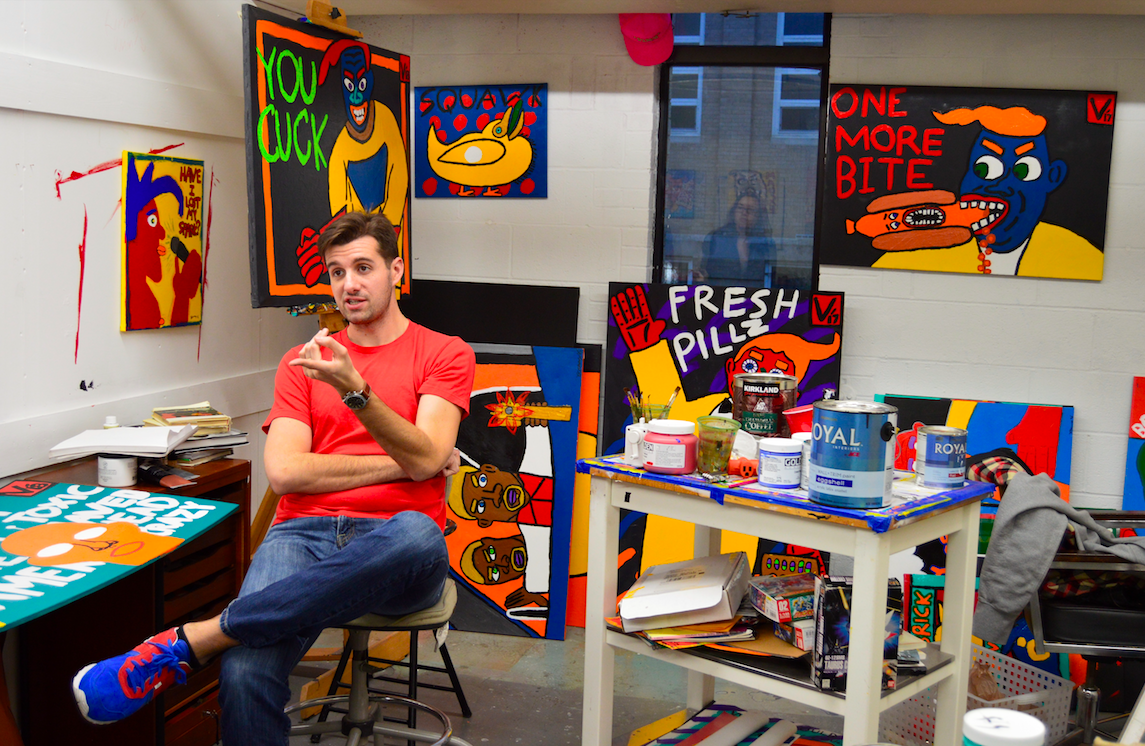 Charlie Visconage is taking it easy. The 31-year-old Washington artist responsible for Cool Guy Alert!, a Hill Center exhibit on display from Jan. 4 to Feb. 24, recently donated a kidney to his father and is currently in the midst of a gradual recovery. Per doctor’s orders, Visconage has been avoiding lifting heavy objects by burrowing into his extensive DVD collection in between naps. When I first spoke to him by phone, he was spending his time off as any good painter-cum-cinephile would: watching Studio Ghibli’s 1984 sci-fi fantasy epic Nausicaä of the Valley of the Wind.

“I love all kinds of animation,” Visconage said, after we had swapped our favorite Miyazaki films (His is Porco Rosso; mine is Princess Mononoke). “I probably watched several hundred hours of The Simpsons when I was growing up. It’s something I’ve always enjoyed, and something I probably wish I could do in a certain way.”

His pop-art-inspired paintings are wholly unlike Studio Ghibli’s aesthetic, but Visconage’s pastiche approach to art is indeed evocative of The Simpsons, and not just because Homer himself figures prominently in a piece called “DENTAL PLAN.” Like the show, Visconage parodies culture and politics in vivid color and makes no effort to stay faithful to the dimensions or pigmentations of real-life human beings. Realism is beside the point in the blue-skinned, orange-haired world of Charlie Visconage.

In person, Visconage is tall, affable, and unpretentious. He wore a red shirt with bright red and blue sneakers for our interview, the perfect complement to the canvasses that hang on the white walls of DC Arts Studios’ studio 209A. There’s one of a villainous man eating a distraught, anthropomorphic hot dog (“ONE MORE BITE”) and one of an electric-yellow bird painted against a polka-dot backdrop (“SQUAWK”). Another, bordered in neon orange, makes the accusation: “YOU CUCK.” His studio’s biggest painting, a maniacal caricature of Tom Cruise’s disembodied head (“CRUSIN’ USA”), watched us as we sat and talked amid the vivid clutter.

A pop-culture aficionado, Visconage has begun painting an unofficial collection of celebrities and people with “weird histories.” One of his unfinished projects, a teal ode to bald Britney Spears, is born from this theme.

“FRESH PILLZ,” a painting of a cowlicked server hawking a rainbow of drugs, doesn’t boast any star power, yet the piece’s satire is still plain. Inspired by an old poster he saw in New Orleans depicting cocktail waiters slinging drinks, Visconage painted what he sees to be the modern-day equivalent on the back of a wood panel. The painting was too heavy for him to pick up in his current state, so a friend was coming by later to deliver it to the Off-Rhode Gallery where it will be displayed until May 5 with other art created from more than 25 percent recycled material. (Found objects are a Visconage staple: “CRUSIN’ USA” is painted on the back of a discarded landscape painting he found in the DC Arts Studios’ boiler room.)

Although color is his signature, Visconage shrugged off any deeper meaning behind his distinctive palette between swigs from the Perrier bottle he kept by his chair.

“I think I more have an intuitive sense of what I think will work. Every time, I’m looking for high contrast colors, things that will really pop and stand out because there are a lot of f*cking boring, blurry, paintings out there and if my stuff is next to that …” He paused.

It’s tempting to portray Visconage’s entry into the District art world as inevitable, especially given the fact that he grew up doodling homemade comic books that were “100 percent rip-offs of Star Wars and Spider Man.” But nothing Visconage does is inevitable.

During class in high school, Visconage would opt out of paying attention in favor of goofing off. AP Psychology meant charming his way into sitting next to his close friend Andrew Adams even though seating assignments were arranged in alphabetical order by last name.

“Literally every time I heard about the horrors of the Stanford Prison Experiment, I remember Charlie’s impression of Philip Zimbardo and I burst out laughing,” Adams wrote in an email to the Voice. “I’d say the bulk of our bonding happened during Ms. Blakeslee’s Psych AP — still maybe my favorite class I’ve ever taken, solely because I sat next to Charlie.” After they discovered improv theater their junior year, Adams and Visconage helped their drama teacher establish Awkward Improv Group, an organization that still exists today.

At the University of Maryland, Visconage took an extra semester to earn his “terrible, laughably awful” degree in communications. “Academics were never my strong suit,” he told me over the phone. “Classes felt like a waste of time.” Instead, he focused on selling ads for the school paper and hosting a radio show in the 2 a.m. to 4 a.m. Saturday slot. His bids to get on an improv team proved unsuccessful, so he joined the university’s amateur competitive ballroom dance team instead. He also ran a podcast with a friend from Awkward Improv and dabbled in a YouTube sketch comedy show.

After graduation and during a period of unemployment, Visconage dove headfirst into his next, most ambitious venture to date: The Charlie Visconage Show. The comedy talk show, filmed for YouTube in front of a live audience at DC Arts Center, featured monologues, music, and interviews with Washington creatives, and launched on Jan. 19, 2012. It lasted 10 shows before Visconage and his collaborator Topher Bellavia depleted their Kickstarter funds. They revamped it as a monthly event and produced another season before taking a final bow on Aug. 23, 2013.

“[The show] was fun and relatively low-stakes,” Visconage said. “I think it was the first time I really learned how to work hard. My name was on it, and if I let go of the yoke … it would flounder. I didn’t sleep a lot between 2012 and August 2013.” By the end, however, he was ready to let it go. After briefly considering moving it to Chicago, Visconage and his team wrapped up the show on their terms.

“This isn’t free therapy,” Visconage joked on the phone. “But I think, if I can sum it up for you, a consistent theme here is a need to express my own vision, not really having an opportunity to do that, trying to make it happen, and if it doesn’t, I’m going to bail. Since the show, nothing has really held my attention as long as painting has.”

More than being an exercise in comedy and hard work, The Charlie Visconage Show introduced Visconage to Matt Sesow, a local artist who would become his friend and artistic mentor. Sesow became a Charlie Visconage Show regular and the two men began to paint at Sesow’s studio in Adams Morgan. Visconage credits the professional painter with encouraging him to pursue the medium.

“Hearing someone say, ‘You now have the permission to do that’ … that was sort of mindblowing to me,” Visconage recalled. “After that, I ran with it.”

He worked at home until one day, “super emotional” from the psychological after-effects of the alcohol and MDMA he consumed at a Future Islands and Beach House concert the night before, Visconage felt the urge to paint. “I spilled some purple on our carpet and did my best to clean it up, but did a sh*tty job. When Clementine [Wall, Charlie’s then-girlfriend and now-wife] got home, it was the straw that broke the camel’s back and she nicely asked me to seek out alternative space.” He found DC Art Studios, and rented a small, shared space. In January, he upgraded to 209A, his current studio.

Unlike Sesow, who has lived off the sales of his paintings since 2000, Visconage still has a day job. He works as the Digital Content Manager at LeadingAge, a senior citizen advocacy group, where he develops its website and produces two company podcasts. Married for just a little over a year, he and Wall live in Mount Pleasant with Fiero, their flat-coated retriever.

“It’s sort of a funny life,” Visconage admitted. “On one dimension, we’re upper-middle-class whities and then in my spare time I seek to be a little grungier.” He even has a motorcycle.

“I’ve been having fun with that,” he told me.

Studio 209A—with its jugs of acrylic paint, cups of brushes, and words scribbled on the walls—is a grounding force for Visconage. All his own, it’s a concrete reminder that “you get out what you put into it” and it provides a practical reason for sticking with painting. “If I had to move out suddenly, it’d be a lot to clean up,” Visconage joked.

Not that he’s planning on stopping anytime soon. Though he confessed his life has been characterized by “puttering around in different hobbies,” he maintains his loyalty to painting throughout our interviews. “It’s a little bit beyond hobby,” he said. “More like obsession. A compulsion.”

Though he doesn’t visit museums much—he can’t stand minimalism or those “boring blurry paintings” he mentioned before—he did find a way to relate to the subversive works of Brand New: Art and Commodity in the 1980s, a Hirshhorn exhibit he recently visited.

“A lot of those artists were pushing against things they disliked in culture,” he said. “I think that is an important and powerful reason for doing stuff. It’s not a polite reason to do things, but I don’t do this to be polite, you know? I think having to push against something is good. Such and such thing pisses me off and the only way I can really do anything about it is to paint about it.”

His wife offered a different perspective in an email to the Voice. “I think to see Charlie’s paintings is to have a window into his brain,” she wrote. “I see his paintings as a visual expression of what is going on inside his head—all the jokes, memes, comics, and other bits of inspiration jumbled together will eventually make their way out onto the canvas … I think the reason that people relate to his paintings is because he has a strong voice that comes out into each piece, [one that] people are able to connect to.”

Despite his laid-back worldview, Visconage still struggles with self-doubt. “Some days it’s great, and some days it’s like, ‘What the f*ck am I doing?’” he said. He stood up and tilted “CRUSIN’ USA” away from the wall to reveal the word “F*CK” painted sloppily on the area behind it, the physical remnant of a commission gone bad.

But Visconage isn’t one to wallow, and his commitment to optimism is reflected in a pair of reminders he’s scrawled on the wall directly across from that momentary frustration. The first, in big letters, reads “Appreciate Everything!” The second is smaller, written above eye-level: “Don’t forget the beginner’s spirit!”

“That’s very important,” Visconage said. “Sometimes I come in and I’m dejected. If you don’t have an idea, you feel like a failure. Just a reminder that ‘That’s okay!’ is good.”

That’s the beauty of Charlie Visconage: He’s not afraid to paint over it and start again.