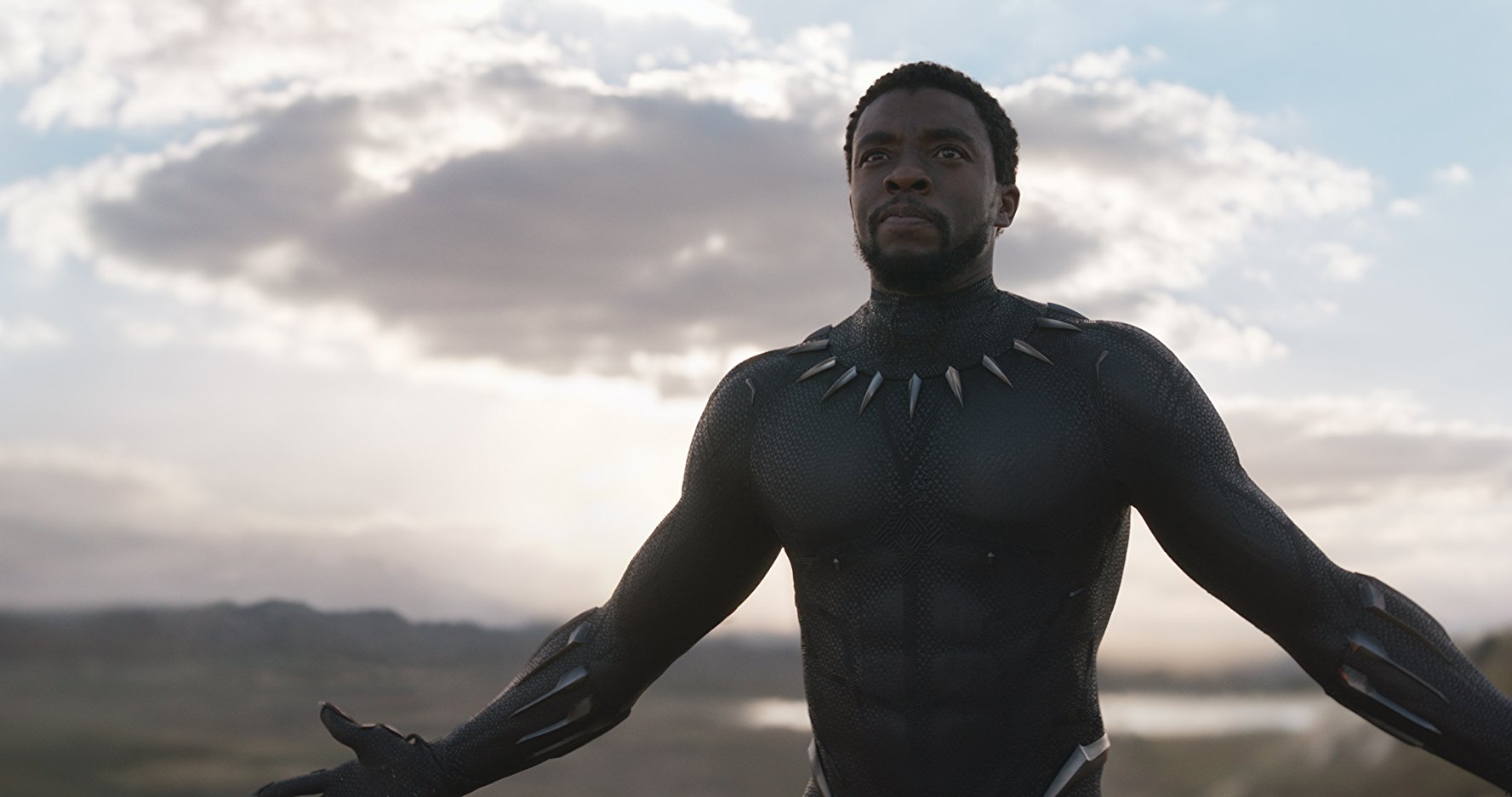 The theater is crowded and buzzing with excitement as people file in. It’s a chilly Sunday evening, when most Georgetown students would be holed up studying. On this particular Sunday, however, a group of students are taking a break from the books to sit in the AMC Loews Georgetown cinema. They’re here for a private screening hosted by the Black Student Alliance and the Black House and sponsored by the President’s Office’s Let Freedom Ring! Initiative. Music is playing; people, some dressed in African attire, are dancing. The enthusiasm is high as everyone waits for Marvel’s Black Panther to begin.

Introduced into the Marvel Cinematic Universe in 2016’s Captain America: Civil War, the character T’Challa (Chadwick Boseman) gets his own stand-alone story in Black Panther. The film follows T’Challa in the fictional, technologically advanced African country Wakanda as he prepares to ascend to the throne following his father’s death, becoming the king and the new Black Panther.

Black Panther is the first Marvel film, and one of few superhero films, to have a predominantly black cast and crew. It boasts both an ensemble of talented black actors such as Michael B. Jordan, Lupita Nyong’o, and Angela Bassett on screen, and also a production staff filled with prominent black people behind the scenes. The crew features director Ryan Coogler, whose past works include the films Fruitvale Station (2013) and Creed (2015), and Academy Award-nominated costume designer Ruth E. Carter, with a soundtrack curated by Kendrick Lamar.

The predominantly black cast and African setting in a mainstream movie led to a cultural moment surrounding Black Panther, which broke ticket presale records weeks before its Feb. 16 release date.

Black Panther is not the first black superhero to hit the big screen. Until now, the most famous was Wesley Snipes’ portrayal as the titular hero in 1998’s Blade, in which he plays a vampire hunter who is half-vampire himself. According to the Georgetown University American Studies program manager Colva Weissenstein, whose research centers around cultural studies and film, Blade was revolutionary for its time.

“The sort of fascination of having black characters on screen that are heroes, self-sufficient, not demonized in all sorts of typical ways was so novel,” she said. “And even in that film both Blade and Karen are dynamic, complicated characters, which shouldn’t be remarkable, but in the late ’90s it was deeply remarkable; it was astonishing.”

In many ways, Blade serves as the foundation on which a movie like Black Panther is built. Wesley Snipes once announced that he wanted to make a film about Black Panther, Weissenstein said. But the project never materialized, and in 1998, Marvel cast him in Blade.

But despite how remarkable it was when it came out, Blade is, as Weissenstein describes, a “complicated mess” of representation.

“Blade is othered. Everything about him is othered,” she said. “He looks different from other characters, his vampirism is abhorrent. Whereas Black Panther doesn’t do that. [T’Challa] is not othered. In fact, he is representative of a whole, rather than being a singular person.”

Despite the novel emergence of a black superhero, the lack of a diverse representation of black experiences in Blade held the film back from truly being representative. Black Panther, however, manages to avoid tokenizing with one or two black characters and instead provides an entire cast.

Soyica Colbert, an associate professor in the African American studies department (AFAM) and chair of the Department of Performing Arts, echoed this sentiment. “I think that there has been no film that I remember growing up that had this type of blackness represented so robustly.”

Maya James (COL ’20), who attended the private screening of the film, was deeply affected by the representation. “It was complete awe. I was sitting at the theater almost crying at some points because I was just so surprised that they actually were willing to put that much black and African culture on the screen.”

“I was really scared that they would reel it back to appeal to white audiences,” she said. “But it really wasn’t. It was unapologetically black.”

Black Panther has managed to have a profound impact on the black Georgetown community. Morgan Robinson (NHS ’20) described her experience at the private screening with her Georgetown peers. “You’re more comfortable. You don’t have to worry about code-switching. You just feel like you’re being embraced in the theater.”

The day after the screening, the Black House hosted a discussion, where students gathered to talk about some of the themes within the film. Kosi Ndukwe (COL ’19), a film and media studies minor, commented on one of the discussion topics: the villain of the film, Erik Killmonger (Michael B. Jordan), as a representation of black Americans, and the different people of Wakanda as representations of different aspects of Africa.

“A good thing Disney did with this was they didn’t make it so centrally focused on just Black Panther himself, it was more just about the whole,” Ndukwe said. “This isn’t just a Black Panther story. This is Wakanda’s story, this is Killmonger’s story, this is a lot of people’s story. And there are definitely people who can relate to each different aspect.”

On Feb. 16, the AFAM took a small group of students in the department to see the film as well. Rosemary Ndubuizu, an assistant professor in the department, came up with the idea.“ I thought it’d be nice for our students, our black students, people-of-color students to experience joy. In media, we don’t often get to experience joy,” Ndubuizu said. “It’s a movie that talks about the complexities of being black in this moment and has a diasporic concept to blackness. I wanted the students to see that. That’s the reality of blackness, it’s always been diasporic. It forces us to think outside of a U.S.-centric model.”

Of the discussion afterwards, Ndubuizu said that the film inspired conversations about diasporic connections and cultural kinship between those who are descendant of enslaved Africans and those in Africa still living with the legacy of colonialism.

Killmonger’s story of being a Wakandan abandoned in America as a child, Ndukwe said, speaks largely to the black American experience, one which is often riddled with a feeling of exclusion. “This is my country, but at the same time it’s not my country,” Ndukwe said. “That’s Killmonger’s struggle.”

His adversarial relationship with T’Challa, who grew up in the Wakandan royal family, highlights the relationship between Africans and African-Americans that Ndubuizu said was central to the AFAM students’ discussion. It also analyzes the anger that Killmonger’s character felt after being abandoned to deal with the hardships of being black in America.

Colbert, who also attended the AFAM department’s screening and discussion, found that Killmonger’s motivation as a character is the product of a legacy of imperialism. Killmonger’s goal throughout the film is to arm black people all over the world with Wakanda’s advanced weaponry so that they can revolt against their oppressors and create a global empire.

“His vision for repair is deeply rooted in the idea of self-defense,” Colbert said. “We can think some about the fights of independence movements in Africa and in the Caribbean and native people from the countries taking up arms to defend themselves against colonialists and how that seemed to be the right thing to do in the mid-20th century.”

The question then, Colbert said, is how the ongoing violence against black people in America should fit into this history, and whether or not a repetition of violence is the solution.

A large part of the discussion centered on Africa. “For sub-Saharan Africa, things weren’t all peachy keen,” Ndubizu said. “And I think they show that in Wakanda, like right outside of the border of their protective forcefield, was a poor country because of the legacies of colonialism.”

During the discussion, the students grappled with all of these themes: colonialism, connections between Africans and African-Americans, and whether Killmonger’s solution to the ongoing oppression and subjugation of black people was a valid one.

Black Panther is not the first film with a predominantly black cast and crew which deals with issues facing the black community—Moonlight came out to critical acclaim in 2016. Both films prompted discussion on a wide range of topics at Georgetown and elsewhere. Black Panther, however, is notable for its remarkable success as a work of mainstream cinema, breaking several records at the box office.

Black Panther took in $292 million in North America in its first week, making it the highest earning first-week for a Marvel Cinematic Universe film, beating out behemoths like The Avengers (2012). It currently has the second biggest opening-weekend gross of all time, behind Star Wars: The Force Awakens (2015). Black Panther officially topped $700 million dollars within the first two weeks of its run.

Black Panther’s reception has mirrored that of another recently released film. Last spring, Jordan Peele released Get Out, a horror film centered around the black perspective in America and the fears that come out of being surrounded by whiteness. It also succeeded at the box office, making $255 million and receiving nominations for several Academy Awards.

Aside from the financial success, James sees this film changing the perception of who is allowed to enjoy science fiction and fantasy films. “The idea of blacks geeking out over stuff doesn’t seem too foreign anymore. It’s not any different from white people dressing up to go see Harry Potter,” she said. “You don’t have to worry about, ‘How am I going to look like this character if they looking nothing like me?’ No, you can actually dress up little black boys as kings and little black girls as army generals now.”

For little black girls watching, Colbert hopes to see a black female-centered movie like this soon. “What would it mean to have a story focused on Lupita Nyong’o’s character, right? Would people show up? Would black folks show up for a film with a similar aesthetic but that focused on women?”

Black Panther’s success has the potential to open doors for more black actors, black directors, black costume designers—for more black people in the industry as a whole. Its celebration of black and African culture, and its story of colonization and the African diaspora are incredibly timely and important. But, it is also long overdue and many hope it will set a precedent for films like this to be commonplace, and not a rarity.

“This is what Hollywood looks like when we acknowledge that there are lots of people here,” Weissenstein said. “When we acknowledge that diversity is not something that we’re trying really hard to get but something that just is a part of our culture and a part of America and a part of the way film will and should be made. In that way, Black Panther is astonishing to see—but it will hopefully not be special forever.”