On Monday, March 5, the Blue & Gray were shutout 7-0 by FAU. Georgetown was unable to win a single set throughout the entire day. The closest that any Hoya came was senior Marco Lam and freshman Rohan Kadmar, who were able to win 6 singles games each. However, both Lam and Kadmar lost 7-6 to FAU freshman Thomas Bugeaud and junior Gabriel Sidney, respectively. The doubles team of Kadmar and junior Michael Chen were leading 5-4 in the No. 3 doubles match, but the match was not finished.

Tuesday, March 6, the Hoyas were defeated 7-2 by the Fighting Knights of Lynn. Once again, Georgetown struggled mightily in the singles competitions, failing to win any of the matches. The Hoyas were, however, able to win two out of the three doubles matches. The No. 1 team of seniors Peter Beatty and Mac Rechan defeated Lynn seniors Jean-Baptiste Mateo and Florian Clemares 9-8 (7-4). Georgetown dropped the No. 2 match, but Kadmar and Chen were able to salvage the last match. They prevailed over senior Tristan Houle and sophomore Gabriel Hocevar 8-6.

Finally, Georgetown faced off with Barry on Thursday, March 8, at Barry’s Buccaneer Tennis Center in Miami, where the Buccaneers pulled out the 5-1 win. The Hoyas went winless in singles again, ending their trip to Florida without a singles match victory. The only match that went Georgetown’s way was No. 3 doubles. The fraternal team of junior Will and freshman Charlie Sharton bested the Barry team 9-7. Their opponents were sophomore Carlos Gomez and junior Vivien Versier.

The road trip was certainly disappointing for the Blue & Gray, but at the very least they know they have some work to do. In addition, they were defeated by very respectable opponents. Barry and Lynn rank No. 2 and No. 3 in Division II, respectively, and FAU’s solid record speaks for itself.

Freshman Mark Millitzer said, “The conditions were tough and we didn’t perform our best, but we’re taking the positives from the trip and moving forward. We know what we need to work on for the rest of the season.”

The Hoyas will take the courts again on Saturday, March 17, against the Temple Owls (8-4, 0-1 AAC). The match will be played at the Arlington YMCA, and is set to start at 6 p.m. ET. Follow @GUVoiceSports on Twitter for more updates and breaking news. 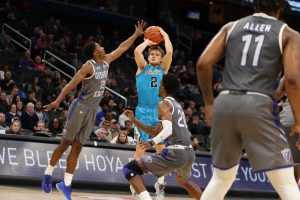 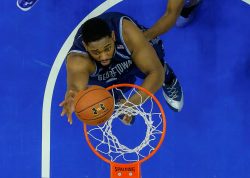 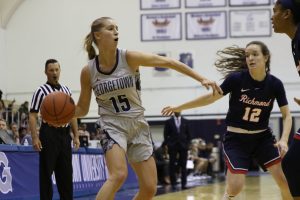