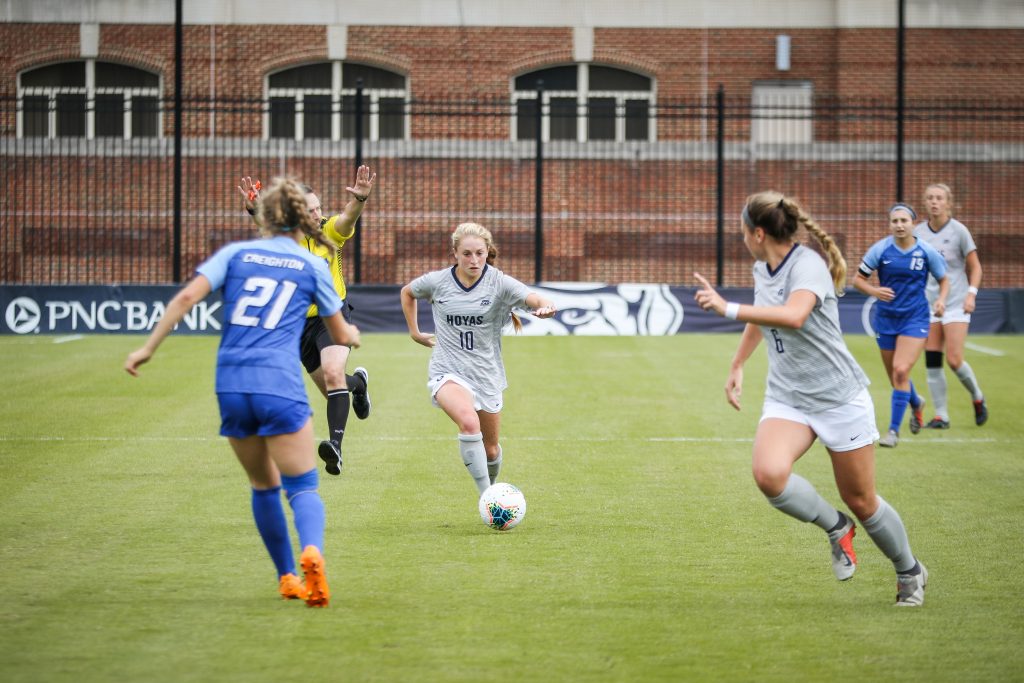 The No. 14 Georgetown women’s soccer team will welcome Seton Hall to Shaw Field on Sunday at 1:00 p.m. ET. The Hoyas are heading into the conference game after a tough 1-0 loss in overtime against DePaul on Thursday, while the Pirates also lost on Thursday by the same scoreline against Creighton. Though goals have eluded the Hoyas in recent matches, they should be able to right the ship against a Pirates team that has conceded four or more goals in four of their seven conference showdowns.

The Hoyas (10-3-3, 4-1-2 Big East) are ranked second in the Big East conference, while Seton Hall (1-12-1, 0-7 Big East) is last and mathematically eliminated from the conference tournament, so they will continue to be motivated to pick up at least one result from Big East play.

Georgetown suffered its first conference loss in two years against DePaul (7-6-3, 4-2-1 Big East) on Thursday when a scrappy scoreless draw forced the teams into sudden-death overtime after ninety minutes. Two minutes into the extra period, however, DePaul junior forward Meghan Turner was first to a loose ball in the box and slotted home to give the Blue Demons the win. This loss comes on the heels of a hard-fought draw against Butler (9-4-3, 4-1-2 Big East) last Sunday.

Uncharacteristically, the Hoyas have not won since October 10th against home against Xavier (12-3-2, 5-2-0 Big East) and have not scored since freshman forward Sofie Fox’s second-half strike to level the game against Creighton on October 13th. Senior forwards Amanda Carolan and Paula Germino-Watnick still pace the Hoyas in points, with 23 and 20, respectively.

The Pirates’ last game was played at home against Creighton (8-6-2, 2-3-2 Big East). They put up a good fight against the heavily favored Bluejays, with three shots attempted in the first half of the game. Eventually, Seton Hall fell on a goal scored in the 76th minute, with Creighton having outshot the Pirates 15 to 3.

Sunday’s game is set for 1:00 p.m ET on Shaw Field. Live stats and a stream are available at guhoyas.com. Follow @GUVoiceSports on Twitter for updates and game recaps throughout the women’s soccer season, as well as coverage of the rest of the school sports throughout the year.