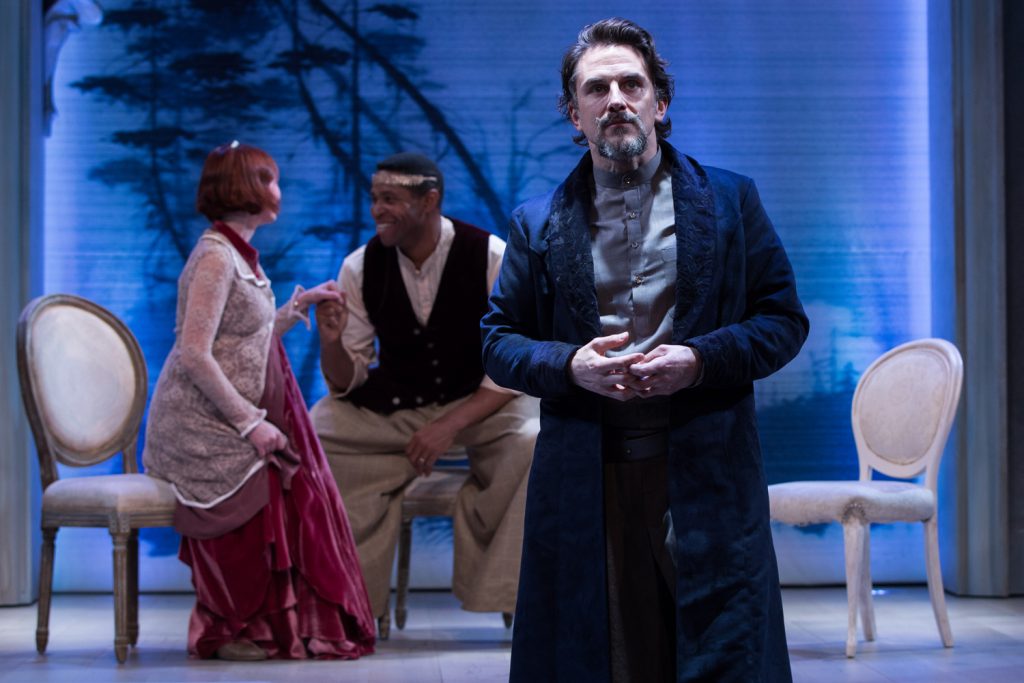 Plays are a fascinating medium through which to tell a story. Not only does the audience see the action unfold in front of them as it happens but, depending on the skill of the actors and the director, viewers may even begin to feel a part of it. The 2018 Folger Theater production of Shakespeare’s The Winter’s Tale does just that as a witty cast and assured direction bring to life the Bard’s timeless fable about the corruption of jealousy, the improbability of fate, and the triumph of the good, deftly mixing drama and comedy along the way.

Set in the kingdoms of Sicilia and Bohemia, the play tells the story of King Leontes (Michael Tisdale), who suspects his wife, Queen Hermione (Katie Debuys), is having an affair with fellow sovereign Polixenes (Aldo Billingslea). Hence, he concocts a plot to poison the latter and charge the former with treason. What follows are a couple of heartbreaking sequences set in a prison and a courtroom, held with such gravitas and momentum that one actually feels like a member of the fictional public. The sets, up to this point, are all sober and bleak accompanied by grey and blue lighting, highlighting the grim and hopeless nature of the play’s first half. Once the fateful verdict of the Oracle of Delphos is revealed, the audience sadly realizes that nothing will ever be the same for these characters. Yet, and quite unexpectedly, we are quickly reminded of Shakespeare’s unique unpredictability and signature drollness with the legendary stage command, “Exit, Pursued by a Bear,” performed with deadpan perfection by Camillo (Eric Hissom), a member of the King’s court.

As we settle into the second half of the play, the mood and tone become lighter, as evidenced by brighter sets, yellower tones, and more pleasant tunes. The inclusion of colorful flowers spread throughout the stage also hint at this half’s livelier approach. Though some of the intensity is lost and the pacing briefly stumbles, the audience will rejoice in realizing a Shakespearean comedy, rather than a tragedy, is underway. The inclusion of Kimberly Gilbert’s Autolycus provides some much-needed comic relief, and the romance between Perdita (Daven Ralston) and Florizel (Drew Drake) will warm your heart. As the play nears its end, long-held secrets are revealed in an emotional conclusion that exposes the characters’ deepest and truest selves. The handling of the final twist may leave some less than satisfied though, since even though its introduction is genuinely unexpected and hints at something potentially fascinating, it gradually devolves into awkward and unnecessary melodrama. Despite this, the road to curtain is filled with so much heart and sentiment that the audience will be able to forgive the performance’s minor shortfalls.

The cast is great across the board, all giving heartfelt performances and bringing to life a set of peculiar and truly memorable characters. Though at first unsure in his approach, Tisdale gives Leontes a sort of tragic empathy that highlights the character’s internal struggle and many contradictions. As Queen Hermione, Debuys gives an expressive and raw performance, making the audience sympathetic to her character’s plight. Billingslea is imposing as Polixenes, and both Richard R. Henry and Joshua Thomas are instantly endearing and hilarious as the old shepherd and his son. The romantic couple, Perdita and Florizel, is brought to life with great skill by the luminous Ralston and the energetic Drake, both giving their characters an engaging adolescent charm. Gilbert, a delight to watch, almost steals the show as the cunning Autolycus, even if her role is initially not that clear. However, the two true standouts are Grace Gonglewski as Paulina and Hissom’s Camillo. The former, as the voice of reason, gives her character grand authority through passionate and insightful speeches, while the latter embodies the pathetic courtier with grace, great comedic timing, and spot-on mannerisms and expressions.

Furthermore, a great part of the credit behind the play’s success must be given to Aaron Posner, whose firm direction presents a unique vision of Shakespeare’s work. A lot of this has to do with interesting and innovative choices, like the bold decisions to use a hand-held puppet to bring Mamillius, the king’s son, to life, and to have an actor perform the baby’s cries on stage. Though off-putting and confusing at first, these decisions ultimately work because they help ground the scenes in reality, making the overall performance more visceral for the audience. Likewise, Posner is not afraid to let the character’s actions and positions on stage speak for themselves. For instance, Leontes witnesses his wife’s trial as a member of the audience, emphasizing his insecurities and the latent uncertainty he feels towards his initial accusation. Similarly, towards the end, he is reintroduced giving his back to the audience, underscoring the shame and repentance he feels for his past actions.

Posner’s entire team should be praised as well since their contributions make the play’s internal world tangible and, through clever visual cues, reveal the character’s true natures. For example, Leonte’s purplish velvet coat symbolizes his dark, jealous heart, Paulina’s three-layered dress highlights her regality, and Perdita’s white dress indicates her innocence. Likewise, the music effectively sets the mood in various instances, making some scenes genuinely suspenseful. The sound effects are perfectly coordinated too, particularly during the verdict scene, which is sure to bring chills down the audience’s spine. All these choices add to a truly immersive experience, as we are not seeing events sequentially unfold in a group of characters, but rather we see them actually happen to them.

All in all, the Folger Theatre’s rendition of The Winter’s Tale is a truly captivating piece of art that, besides being humorously entertaining and astutely perceptive, remains true to the spirit of its source material, exalting its timeless nature.

It’s not you! It’s me! in a pie chart
The Reel Pulpit: Science Fiction and Annihilation 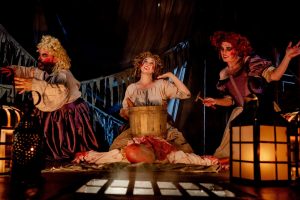