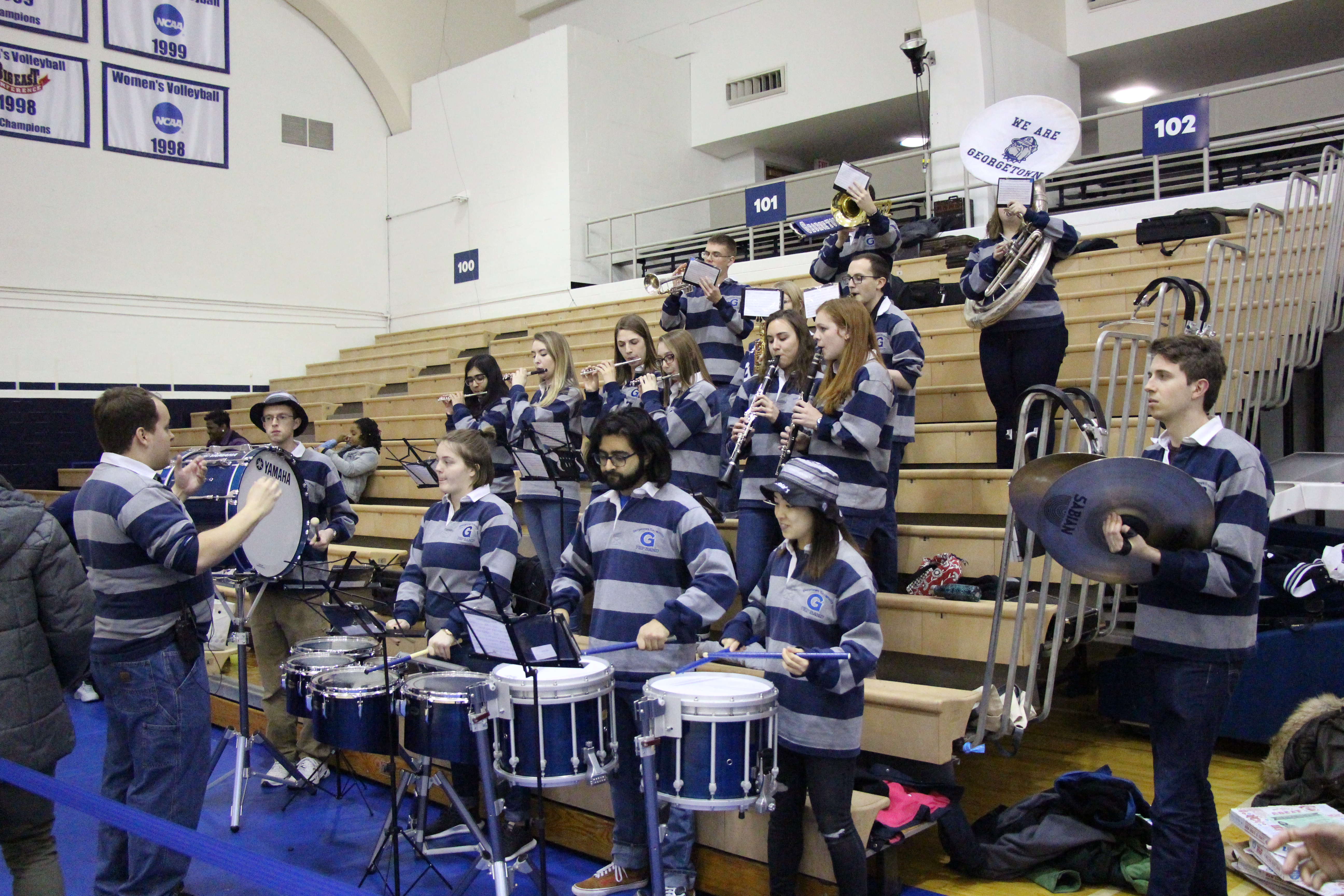 The pep band sets up close to the doors of the 2,500-seat arena instead of in its usual post by the back wall, displaced by a local high school band Delaware brings for support. Despite the change in scenery, the Hoya pep band continues as normal. As per usual, while visiting Delaware fans made the trip to Washington, Georgetown students stayed home.

“A lot of the time, we’re kind of the only student section. Maybe 10 members of Hoya Blue will show up, but it’s kind of just us,” said Graham Kaluzny (COL ’18), pep band president and percussionist. “We can kind of define the student section.”

The band commanded energy for this first round Women’s National Invitational Tournament (WNIT) matchup against a Blue Hens team led by the Hoyas’ former head coach, Natasha Adair, who left for Delaware after last season. The Georgetown team’s enthusiastic play from the tip forced Adair to call an early timeout after senior forward Cynthia Petke’s second 3-pointer of the night put the Hoyas up 10-2. When Adair coached the Hoyas, she urged students to pack McDonough, and her team was always better with the crowd behind them. 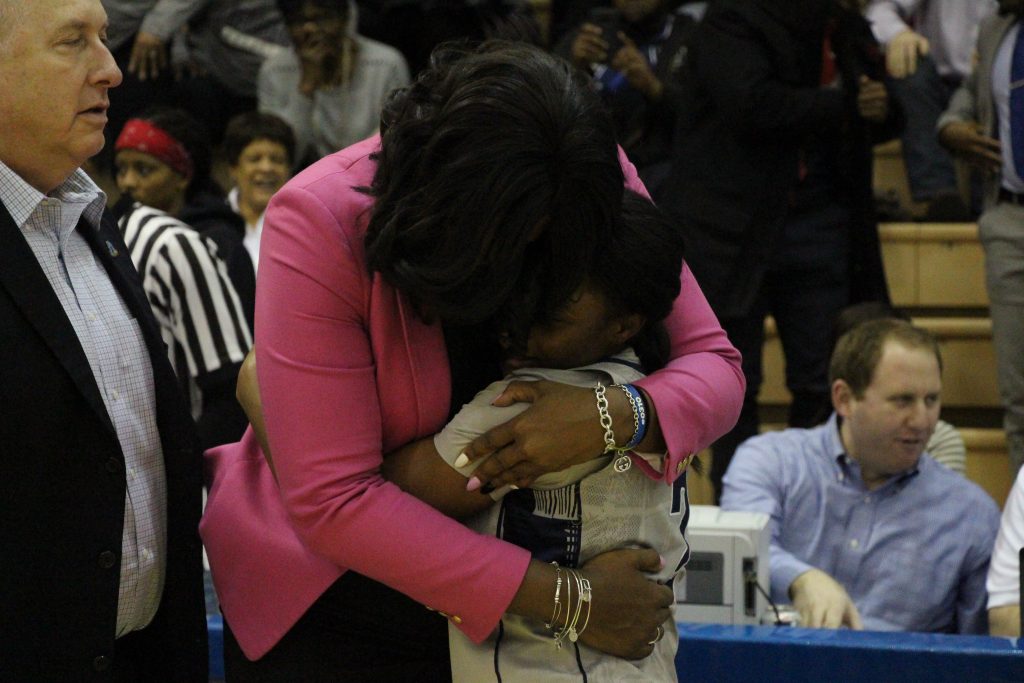 “We just feed off [the crowd’s] energy,” former Georgetown forward Faith Woodard said after a win in January 2017. “When they have energy, when our bench has energy, we can’t lose like that.”

First-year Hoya head coach James Howard still uses many of Adair’s ideas, which he learned during his time as her associate head coach. Her early timeout was an acknowledgement of the noise in the building and the need to quiet the crowd, including the pep band.

“It’s a really small arena, so we make more of an impact,” clarinet player Sally Matson (COL ’20) said. “Especially when we’re cheering, I think everyone can tell that we’re all hyped and excited about it, and it’s fun knowing that the fans are getting excited by your energy.”

Last year, the men’s basketball team hosted Arkansas State in their first on-campus game since the 2014 National Invitation Tournament. The pep band was right there in McDonough, as always. But unlike the Capital One Arena, where the noise escapes into the cavernous ceiling, the music stayed low to the floor and blasted across the stands. The arena was stuffed with students, and the combined noise reached deafening levels.

Yet even when the women’s team plays and the arena is half-full, the energy is still high. The team looks to make energy plays and prides itself on defense, aiming to keep its opponents under 55 points, force turnovers, make steals, and hit easy transition layups. When the team forces turnovers—travels, offensive fouls, shot clock violations—the pep band cheers. For this game, the cheers seemed the loudest and longest they have been all season.

“It’s easy to get here so we often have a lot more people, and we just have a good time,” said student conductor and former tuba player Alex Roberds (SFS ’18). “It’s fun to be closer to the action and actually be able to interact with them a little more.” 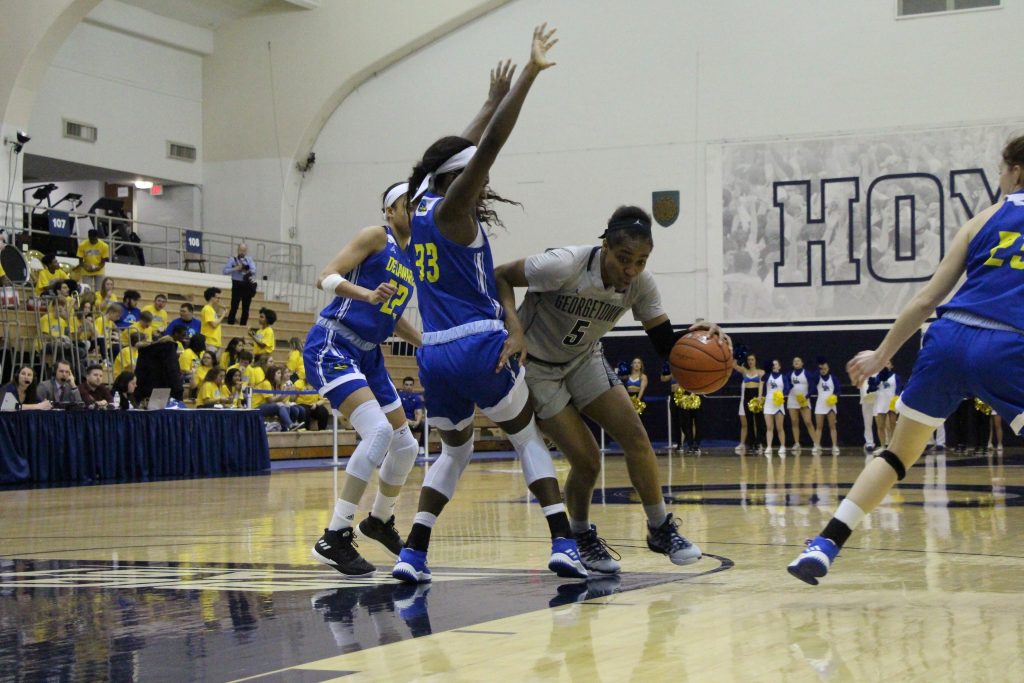 The Hoyas built a 12-point advantage by the end of the third quarter, and the band roared. The crowd responded, crescendoing as Petke and junior guard Dionna White led a surge aided by rebounds from senior center Yazmine Belk. Georgetown poured in 22 points during the third quarter.

“Even people who didn’t really like sports before they came to Georgetown and then joined pep band care about our teams,” Matson said.

The pep band rewarded Adair with applause when the PA announced her name. She recognized the importance of the pep band to the team on the court, and after wins, she would take her squad in front of the pep band to clap along to the fight song. But today’s pep band is not the same group from when Adair began her Georgetown career four years ago. That band expected little and struggled to create enthusiasm. If anything, today’s band has gone to the other extreme, with passion oozing from their section of the bleachers at every game.

“A lot of people have forgotten the pains of NCAA Tournaments past,” Roberds said. “People are actually into it, and they’re not pessimistic about it all the time, so I’d say that’s something that’s died out since we’ve joined.”

Former faculty director Aaron Broadus left the pep band after the fall semester, so while the students had already handled most of the administrative aspects of running the band, the music is now completely in their hands as well. Roberds is the first student conductor and sees the student-run system continuing as the band moves forward.

Still, the band is not where it wants to be. Fewer than 20 band members attended the game on Friday, and the high school band on the other end of the arena dwarfed the group in blue and grey rugby jerseys.

“We’re probably not as big as we want to be right now, and we’ve been even smaller in past years, but we have a really strong freshman class, a really strong sophomore class,” Kaluzny said. “In the future, we’ll have a band the size of what we want.”

The Hoyas won 67-57 and advanced to the second round, where they fell to Duquesne (25-8, 13-3 A-10). While the pep band packed up, the high school band looked to make the most of their appearance in McDonough, playing long after the arena was otherwise empty. The music permeated even into the hall next to the locker room, and the footsteps across the wooden floor were inaudible, hinting at pep band’s potential for the future. 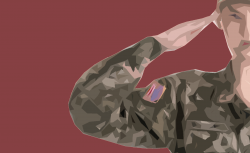