“I’m just really happy for our seniors,” Georgetown head coach Kevin Warne said. “I’m very happy for them that they’re able to walk off the last time they play on Cooper Field with the ‘W.’”

The Hoyas blitzed their opponents from the opening faceoff, with Clark completing his hat trick in 2:05. The Hoyas continued to pile on the pressure, with Carraway scoring twice, senior attacker Matt Behrens scoring his first goal, and Clark adding one more before the midway point of the first quarter. The scoring slowed as the first quarter finished 7-0 for a dominant Georgetown team, who outshot the Highlanders 12-1 in the period. The only statistic the Highlanders led was saves as senior goalkeeper Nick Marrocco had nothing to do in goal for the Hoyas.

“It was pretty much all about gameplanning,” Clark said of the fast start.

The second quarter was more one way traffic, with Carraway and Behrens completing their hat tricks in the first two minutes of the period to make the score 10-0. The Hoyas continued piling on the pressure, forcing a pair of saves out of NJIT freshman goalkeeper Alexzander Hunt. Junior midfielder Ryan Darrow finally scored NJIT’s opener at the 9:47 mark of the second before Clark resumed business as usual with his fifth goal of the contest 40 seconds later. NJIT freshman attacker Collin Fogerty took advantage of an extra man and scored the Highlanders’ second, but again the Hoyas responded with freshman midfielder Kevin Petrillo’s goal at the 3:36 mark in the quarter. On another extra man opportunity with 5.5 seconds remaining in the half, junior attacker Aaron Forster scored NJIT’s third goal.

Despite the improvement in the second quarter Georgetown still clearly dominated, outshooting the Highlanders 20-5, winning 13 of 17 faceoffs, and picking up 24 ground balls to NJIT’s nine.

Marrocco got the crowd on its feet after a keeper run that nearly culminated in a goal, but NJIT cut of the return pass and Marrocco took the long trot back to his net while the Hoyas regrouped. It took until the 4:46 mark for Carraway to open the scoring for the third and give the Hoyas a 13-3 lead. Darrow scored with 40.4 second remaining in the third after leaving a Georgetown defender on the floor and the third ended at 13-4. Despite the lack of goals, Georgetown was still just as dominant, outshooting the Highlanders 9-2 on the quarter, to take the game tally to 29-7. Fewer of those shots were on goal, however, as NJIT junior goalkeeper Cameron Cronk made only one save in the period.

Junior midfielder Derek Altobello took advantage of an extra man opportunity with a close range goal as Warne pulled his starters. Freshman goalkeeper Owen McElroy recorded the first save for any of the Georgetown keepers just before freshman attacker Niko Gekas made it 15-4 with 8:14 remaining. Fogerty grabbed two late consolation goals, first from a tight angle with 2:16 remaining and the other while turning with 28.2 seconds to go, but it didn’t matter as the Hoyas cruised to victory. However, the Warne is not completely satisfied with the performance.

“When you get to this point of year, you’ve got to be consistent across the board in all phases,” Warne said when asked what could be improved. “Make sure we’re tightened up on defense, understand what the plan is on offense.”

The fourth quarter saw NJIT outshoot Georgetown, but it was overshadowed by Georgetown winning the shooting battle 35-16, 39 ground balls to NJIT’s 20, and 19 of 25 faceoffs.

The Hoyas finish their season at St. John’s (6-7, 0-4 Big East) on Saturday at 1 p.m. For more updates on men’s lacrosse and the rest of Georgetown’s spring sports, follow @GUVoiceSports on Twitter. 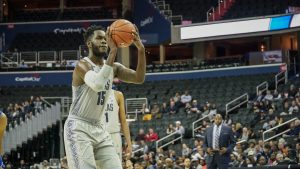 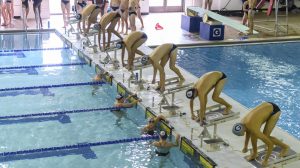 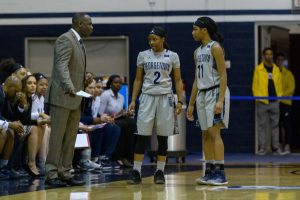 Bounced out: Women’s basketball falls in WNIT second round to Duquesne