There is a scene in Sorry to Bother You — the much hyped debut film from multihyphenate screenwriter-director Boots Riley — wherein our protagonist Cassius Green (Lakeith Stanfield) is obliged to perform for wealthy, coked out partygoers. At first, expectations deflate around Cash’s lame attempt at freestyling until he begins half-rapping, half-shouting the n-word over and over into the mic. The majority white crowd erupts, parroting the slur in gleeful, raucous unison.

Riley’s Sundance hit is stuffed with similar gems of dark comedy, moments that unsettle as much as they tickle, mutated just enough to form a reassuring rift between fiction and reality. Consider the film’s principal gag: Cash, unemployed and living in his uncle’s garage, lands a telemarketing gig and whizzes up the corporate ladder in part by masking his blackness with a “white voice” (dubbed by David Cross). Now a coveted power caller, Cash must decide between striking with former co-workers (led by Steven Yeun’s character Squeeze) or making buckets of money schmoozing clients for Worry Free, a company whose promise of food and shelter in return for labor looks like a pernicious strand of wage slavery. (Here, there’s no separating art from politics: Riley, frontman of the Oakland hip hop group The Coup, is a communist and activist for racial and labor justice.)

To even imply Sorry to Bother You is all heavy-handed polemicizing about capitalism and code-switching is to ignore how truly vibrant and wild it is. Desks drop through ceilings, encountering residents mid-coitus. Furniture halves and replaces itself with newer, more stylish iterations. Golden elevators meander to the very top floor, no stops in between. On TVs throughout the narrative, we catch snippets of a reality game show called I Got the Shit Kicked Out of Me. (Contestants participate by getting the shit kicked out of them.) Detroit, Cash’s artist-activist girlfriend (Tessa Thompson, always wonderful), moonlights as a sign spinner, her pink hair bouncing in the twilight. And a bearded Armie Hammer has way too much fun playing Steve Lift, the devilish, sparkly-eyed founder of Worry Free.

At the film’s worst, the confluence of subplots and visuals can feel frantic and scattered. At its best, it’s exhilarating. “I think the way it goes off the rails is something we [The Coup] have always done,” Riley said in an interview with the Voice. “It’s always been my way to keep people engaged with the ideas: to bend reality.”

While writing the script, Riley studied foundational filmmaking texts (like Syd Field’s famous Screenplay: The Foundations of Screenwriting), if only so he could learn what was expected and more nimbly upend precedent. His surrealist, genre-defying storytelling aligns with his broader vision for the expanding oeuvre of Black cinema.

“I feel like the experiences that Black folks have are different enough where it should also spawn different forms of narrative structures and spawn different things that can’t be classified in the genres that exist right now,” he explained. “We could make a movement that’s not just ‘We have our versions’ but ‘We have our own ways of telling stories.’ And not just because a claim needs to be staked, but because that makes art interesting.”
Yet no matter Riley’s dedication to his newest craft — he attended film school before earning a record deal and counts Spike Lee among his influences — the message will always take precedence.

“I think as an artist, the worst thing you can be is an artist whose biggest passion is art. That’s how you come out with wack shit,” he said.

There has to be something you’re more passionate, he clarified, whether it be first love or radical politics: a force that guides your expression. “I think it’s important for any person, human being, period, to try and connect themselves to a movement that changes the way things are. Because if you don’t do it, who’s going to do it?”

Adrift in the spaces between power and insignificance, Cash is Riley’s unenlightened proxy for the typical, non-radical audience member, a not-so gentle reminder that an individualist approach to liberation stumbles where collectivism prevails. Yeun’s Squeeze and Thompson’s Detroit may be the revolutionaries, but Cash will be the relatable one for a decent wedge of the film’s viewership.

“I wanted to take the viewer through the emotions that come with discovering things about yourself,” said Riley. “His reaction to things are ones that people would have if you don’t have some other goal in life. We all want some power in our lives but we make ourselves so much more vulnerable when we do it ourselves.”

For Riley, it’s all about getting his communist philosophy into the mainstream, no matter that the vehicle for doing so succeeds only when it operates within the system its critiquing. “Even Marx sold books,” Riley quipped.

“I could have a collective of three people in a house somewhere — that’s not revolutionary. People have been trying to do that for decades and centuries. The whole point is for me to be able to communicate with folks.”

Sorry to Bother You is Riley packaging his anti-capitalist worldview into a colorful chaos, an affirming mess even when humanity itself teeters on the existential brink. “What I want people to leave with is a feeling that everything can go wrong, everything can be fucked up but the main thing that is empowering is that the fight can go on,” he said.

“Struggling is the thing that brings us through.” 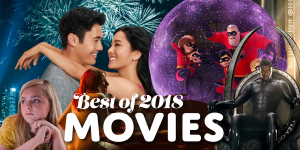 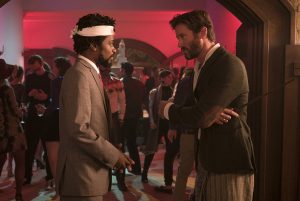