Mission: Impossible – Fallout is everything audiences have come to expect from this iconic action film franchise and then some. With impressively choreographed stunts, thrilling action sequences, ever-rising stakes, a likable cast and, surprisingly, a heart, the movie transcends the stereotype of a summer blockbuster, becoming perhaps the best Mission: Impossible installment to date and one of the finest actions flicks ever made.

Exposition-heavy initial scenes set the stage for the mission to come, which revolves around a stolen suitcase containing enriched plutonium. These instances also provide Ethan Hunt (Tom Cruise) with a moral dilemma that encompasses the film’s central theme: the choice between one life versus the lives of millions. On paper this idea may seem ludicrous for a film like this to tackle, but with a good dose of cheeky self-awareness and for the most part tangible, plausible stakes, Fallout manages to make it work.

Not long into the film, the audience is treated to a heart-pounding sequence that shows Cruise falling from the sky with the Parisian landscape in the background. The scene is then immediately topped by a brutal fist-fight in a nightclub bathroom. The choreography, editing, and sound design in this sequence are spectacular, making for one of the most immersive fight scenes in recent memory. Afterwards, the action is broken up by scenes of back channel negotiations between characters with nefarious agendas, a fantastic motorcycle chase sequence, twists involving masks, and Tom Cruise running through the rooftops of London. In true Mission: Impossible fashion, it all builds up to a bombastically over the top, off-the-charts amazing finale that combines helicopters, nuclear precision, explosions and, of course, an unbearably tense countdown.

Put like this the film may appear formulaic and repetitive and, as always, the story is more convoluted than it needs to be. However, given the craft and care on the part of the filmmakers, the journey proves to be truly unpredictable and unexpected, making up for the film’s minor shortcomings. Besides, isn’t entertaining yet smart escapism what audiences look for?

Having played Ethan Hunt for over twenty years, Tom Cruise is able to imbue his character with unfaltering resolve and empathy, embodying a conflicted hero whose past decisions start catching up to him. Above all, however, his commitment to the role—considering how at 56 he still performs most of his own stunts—adds an element of awe to his performance. In a way, the Mission: Impossible movies work because people continue to come see Cruise try to pull off the impossible and, what can I say, he always delivers.

The supporting performances are all great across the board. Simon Pegg and Ving Rhames continue to bring the laughs as Hunt’s colleagues, Benji and Luther; the trio’s chemistry never fails to be a bright spot in these films. Rebecca Ferguson returns as mysterious English agent Ilsa Faust, fierce and clever in equal measure, creating a worthy female counterpart to Hunt. Michelle Monaghan continues to steal hearts as Hunt’s star-crossed love interest Julia, and Angela Bassett commands the screen as icy CIA director Erica Sloan. Vanessa Kirby steals each scene she is in as an enigmatic underground broker called the White Widow, and Sean Harris remains fascinating as villain Solomon Lane. Arguably the weakest link on the cast, though not by much, is mustachioed Henry Cavill. He brings the necessary physicality to the role of August Walker, but is at times unable to convincingly convey his character’s motivations.

While McQuarrie’s screenplay will not win him any awards, his assured and fast-paced direction is note-perfect. From scene one, he holds the audience’s attention and does not let go, taking his time to tell the story and allowing the movie to flow smoothly over a growing sense of urgency.  The fact that he brings fresh and original set pieces to a franchise that is filled with those reflects on his acute sense for grand spectacle. The bathroom fight is definitely the highlight, but the visually arresting conclusion in the white mountains of the Indian subcontinent comes close to stealing the show.

In the same vein, the film soars when it comes to bringing plain movie-making magic to the screen. For one, Lorne Balfe’s intense score, relying heavily on hair-rising strings and palpable drums, fits perfectly with the unfolding events, creating a thrilling and suspenseful atmosphere throughout. For another, the film looks and sounds superb, making for a truly exhilarating, visually breathtaking experience that is worth seeing on IMAX. The true stars of the show, though, are the talented crew-members behind those impressive visual and practical effects. Just let those adrenaline-pumping, edge-of-your-seat action sequences speak for themselves; more than once, you won’t believe your eyes.

All in all, Fallout is old-fashioned entertainment of the highest order and easily one of the best films of the summer. The audience not only deeply cares about the characters, but is able to chew on the action extravaganza that is so skillfully and artfully displayed. The plot, as fun as it is, is nothing to rave about, but when filmmakers show this level of commitment and respect to their audience, they earn their audience’s respect and commitment in return. Mission accomplished, indeed. 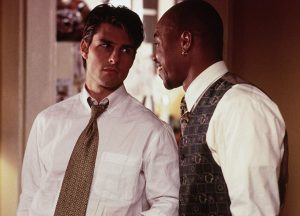 A Case for the Classics: Jerry Maguire