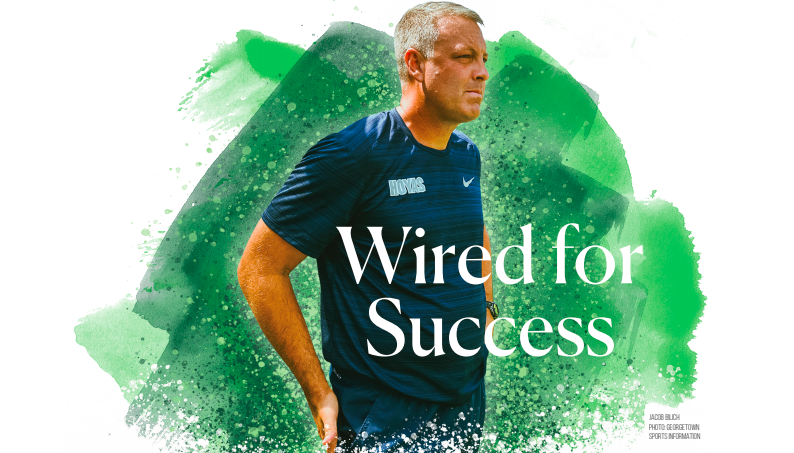 The Georgetown men’s soccer program’s rise to the highest-tier of the collegiate ranks is almost entirely the product of coincidence. The man responsible for the Hoyas’ rise, head coach Brian Wiese, was never supposed to become a soccer coach; he was supposed to be an engineer. If not for an unexpected opportunity during his postgraduate education, the Blue & Gray might still be staving off mediocrity.

Wiese was well on his way to the professional world after graduating in 1995 from Dartmouth College, where he had compiled an impressive list of academic and athletic accomplishments as goalkeeper for the men’s soccer team. Wiese was a three-time All-Ivy League selection, two-time Academic All-Ivy League honoree, and team 1993 Most Valuable Player selection. In his senior year, he served as head coach of the Upper Valley Lightning boys U-15 club team in his free time. This continued a coaching tradition that began in high school, when he coached his physics teacher’s child’s U-10 soccer team while recovering from injuries which sidelined him for nearly 18 months. Wiese left Dartmouth with a Bachelor’s of Arts degree in mechanical engineering and moved to San Diego to take a job in the field.

But his love for the game made it impossible to escape the coaching world. He started coaching a girls U-17 team that practiced in a park behind his apartment complex, but he never intended to pursue coaching professionally.

“Every time there was an opportunity I was very excited to do it, and I was never once like, ‘Well, this is what I want to do with my life as a career.’ But I just liked it,” Wiese said. “I had a degree in engineering and thought, ‘I should probably do that since that’s what I just spent this money on.’ I knew I was trying to get into this master’s program at Stanford. I knew that’s what I wanted to do.”

In the spring of 1996, knowing he would be attending Stanford in the fall, Wiese began searching for opportunities to continue coaching. He wrote letters to college coaches in and around the Palo Alto area, offering to help them coach for free. He didn’t receive a single reply, but he did get a message from his former coach at Dartmouth, Bobby Clark, who had just been named the new men’s soccer head coach at Stanford. Clark knew Wiese would be arriving on campus at the same time as him, and Wiese quickly accepted Clark’s offer of an unpaid assistant position.

“I did two years of this [engineering] program and I coached for two years. It was the same thing. I wasn’t like, ‘Oh, I’m going to do this as a career.’ But I loved to help,” Wiese said.

In Clark’s debut season at the helm, the Cardinal posted their first winning record in four years. Fortunate timing kept Wiese at Stanford upon completion of his master’s degree. Clark’s paid assistant left the program as Wiese was set to graduate, forcing Wiese to decide between an engineering job in San Francisco and a paid assistant coach position at Stanford.

“Bobby called and said, ‘What do you want to do? Do you wanna be a coach or an engineer?’ It was one of those things where it was like, ‘okay.’ It wasn’t even a thought. It was like, ‘I want to do that, which makes sense,’” Wiese said.

In 1998, during Wiese’s first season as a paid assistant, Stanford enjoyed a run of success that culminated in a 1998 national championship game appearance. After five successful seasons at Stanford, Clark accepted the head coach position with Notre Dame, and Wiese followed his mentor to South Bend. There, he was named to CollegeSoccerNews.com’s Top Assistant Coaches List in 2001 and was part of the Big East Coaching Staff of the Year in both 2001 and 2003. In 2005, Wiese was promoted to associate head coach in what would be his final season under Clark’s wing. Together, the duo posted a record of 136-48-25.

Georgetown, which had previously struggled to find consistency and break out of the middle of the Big East pack, hired Wiese as head coach in March 2006. In his first season at the helm, the Blue & Gray posted a modest 6-11 record. While Georgetown steadily improved year after year, they still failed to generate a breakthrough moment to catapult themselves onto the national stage. That changed in 2012, when Wiese guided the Hoyas to the national championship game after accruing a school-record 19 wins. Though the team lost that game to Indiana University, Georgetown proved it could no longer be overlooked.

“I think [the team’s progression since 2006] says everything,” senior defender Brendan McDonough said. “I mean, he took a program that wasn’t nationally recognized and he took them to the national championship. We’ve won multiple Big East titles since I’ve been here. We’ve always been in the national rankings and that starts with him. He’s the figurehead, he’s the leader of the team and if we didn’t have him to guide us in the right way, then there’s no way we would be where we are now with the success we’re having.”

Wiese’s players say he has a knack for fostering team cohesion and getting the most out of each of his players; just as every piece of a product’s engineering is important to its functioning at a high level, every player’s training is important to a team operating at its fullest potential.

“He’s very good at putting himself in other people’s shoes,” said former goalkeeper JT Marcinkowski, who now plays professionally for the San Jose Quakes in Major League Soccer (MLS). “I think with that kind of attribute, he really does a good job of relating to every player. It doesn’t matter if you’re the starting center-mid or you’re the last person on the bench—everyone really feels like part of the team. He really does a good job of knowing how to push people and get them to reach their best potential.”

Wiese provides his players a space to compete in a way that fosters development, aiding both individual and team success.

“It’s just how the training sessions are run,” said former defender and current Philadelphia Union (MLS) player Keegan Rosenberry. “The way he sets up training everyday, it forces everyone to interact. By that I mean, they need to play well together, need to communicate well together. Coach Wiese knew how to take advantage of that cohesiveness.”

That harmony also stems from the special emphasis Wiese places on the importance of each year’s senior class. The seniors act as an extension of Wiese both on and off the pitch, teaching new players proper training techniques, communicating Wiese’s demands to the team, and demonstrating how to play Georgetown’s brand of soccer.

“For all the years that I’ve been coaching, and playing, every team is only as good as its senior group,” Wiese said. “If you have this great group of players, but your leadership group and your senior group doesn’t quite have it right, you’re going to underachieve as a team. And if you have a senior group that’s really got it right—they’re pushing and they’re driven and they’re doing the right things—they’ll overachieve, whatever that is.”

“Me personally, but also my senior class, we tried to be leaders,”  Rosenberry said. “That was imperative for us just to have that responsibility, to have the trust of the coaching staff to then go and try to lead the group of guys. I think something that Coach Wiese and the staff did was letting us be independent in how we figure the game out.”

That type of success and team leadership has ripple effects that allow Wiese and the Hoyas to maintain a consistently high level of play. For McDonough, a freshman on the 2015 squad, that much is clear.

“[Wiese] always told you to learn from the older guys above you,” McDonough said. “I had guys like Cole Seiler and Josh Yaro to learn from. And even though I wasn’t playing, I was learning just as much from practicing with those guys. So now that I’m a senior, I can help out the younger guys, and the cycle just keeps on going.”

Wiese has constructed a sustainable program on the field, yet he hasn’t forgot about the importance of life off of it. He offers players advice when asked, places trust in them to conduct themselves appropriately, and provides a laugh when needed. His resourcefulness isn’t reserved for his current team, however. Wiese has seen 19 former Hoyas sign for MLS teams in his 13 seasons on the Hilltop. Those players know they can rely on him now just as much as ever before.

“He’s seen so much and put so many players in the pros that there isn’t really a situation that he hasn’t come across,” Marcinkowski said. “Whenever I feel like I need a helping hand, I always give Coach Wiese a call. He’s a very good mentor and he’s a very good friend of mine, I would say, which is something that is very special to me and I’m lucky he’s been so kind and so willing to help with my career so far.”

While Wiese declined an engineering career in favor of coaching more than 20 years ago, his academic background pervades his leadership style.

“Something I appreciated about him the most was that he was a scholar first,” Rosenberry said. “He has all of these degrees and you know [he] almost wanted to be a thinker first. That comes through in a lot of his coaching philosophies, in the way he interacts with people, his players, his coaches.”

The game that Wiese grew up playing continues to provide him with an ample dose of joy nearly a quarter-century after beginning his coaching career. But his engineering background is never far from sight; last summer, he converted an entire wall in his office into a display for the professional jerseys of his former players. For weeks, Wiese labored meticulously, searching for the best way to hang each jersey in a dignified way. Ultimately, he settled on adjustable hangars and neatly aligned each jersey, complete with custom nameplates, on his wall—a clear demonstration of his pride in the program he has crafted.

“What’s not to love? Everyone around the place is really what makes it special at the end of the day. I’ve got a great staff that makes it fun to show up to work everyday, and we’ve got players that love to show up and play,” Wiese said.

“I’m really lucky that I’m able to do something that’s always kind of been, since aged 14-15, that’s really fun. So, you just try not to get fired along the way.” 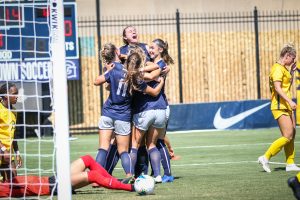 Great artIcle about one of the unsung treasures at Georgetown. Coach Wiese and the Soccer team are not only successful on the field but embody the best of the Georgetown spirit in everything they do.