Japanese Foreign Minister Taro Kono (SFS ’86) spoke on the future of Japanese foreign policy as part of the Lloyd George Lecture Series on Sept. 28. He was joined by Michael Green, Director of the Georgetown University Asian Studies Program, in Gaston Hall for a discussion about current affairs in Asia.

The event was well attended, with the main section of Gaston Hall filled by students and members of the broader D.C. community, including Japanese Ambassador to the United States, Shinsuke Sugiyama.

Kono focused on how his time at Georgetown influenced his career. “Every experience I had here made me who I am as a foreign minister,” he said. He also stressed the importance of connections for Georgetown students, and referenced how exchanges between Georgetown students and Japanese students could improve the future of both communities.

Kono’s speech broke the future of Japanese foreign policy into three major areas: China, Russia, and the Middle East. He focused on continuing to improve relations with China, and suggested that new Chinese initiatives, such as the Belt and Road Initiative, could align with Japanese interests. The two nations have to “share responsibility to ensure peace, stability and prosperity,” Kono said.

His tone towards Russia was similar, and he emphasized that Japan was open for further cooperation with Russia, which he sees as an indispensable stakeholder.

Sophie Stewart (SFS ’22) felt she got a better insight into Kono after the event. “This talk was really interesting because his positions weren’t exactly what I expected,” Stewart said. “He has a reputation for being really liberal, so I guess I didn’t expect him to be really pro-Russia and pro-United States, especially the current administration.”

Kono also said he saw potential for Japanese growth in the Middle East. He stated that Japan’s influence on the region has been effective, and that countries would be open to Japan leading peace efforts.

The question period allowing students to express their thoughts to Kono did get contentious, with a question regarding LGBTQ right and the lack of same-sex marriage in Japan.

Daisy Dunlap (COL ’22) felt Kono treated the question  unfairly. “I was definitely aghast due to the glibness regarding the question,” Dunlap said. “I would have wanted a lot more insight but he brushed away the question.”

Despite some criticisms, many students said they enjoyed the event. Amanda Wong, a first year graduate student in the Asian studies program, felt it was well worth her time. “He’s very funny and a good public speaker”, Wong said. “It was really informative in terms of what Japan’s doing in the international community”.

Despite his focus on foreign policy, Kono recognized the saliency of domestic politics. “You can say whatever you want to say about foreign policy but what really matters is the price of pork at the market nearby”, said Kono. “We should always consider how certain diplomatic policies influence each and every person’s life.” 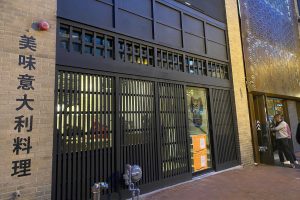