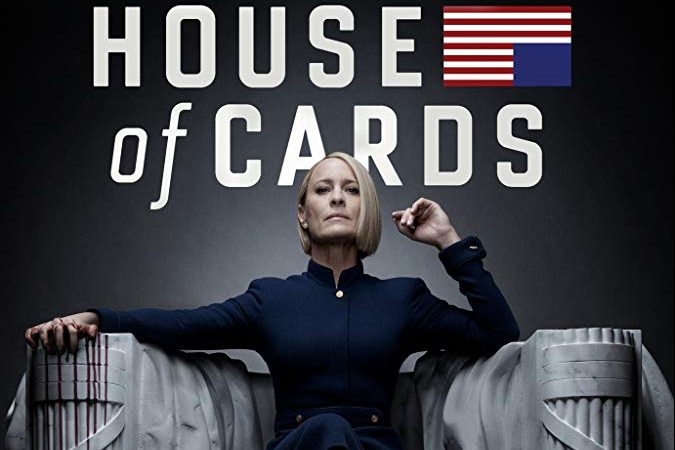 Dajour:  Let’s just get this out of the way now: I’m not going to watch this. I watched the first season of House of Cards a few years back and just could not get into it. I think it had to do with the fact that I already know our country’s politicians are forces of evil—I don’t need a TV show to reinforce this. That being said, the highlight of that first season for me was without a doubt Robin Wright, so it’s nice to see her at the forefront now. It’s really interesting to see how the show is weaving feminism into its final season. Hearing Wright say that she won’t take orders from any man ever again and seeing the ways in which the media is completely against her, the show’s creators are definitely making a statement here. They kind of have to though, what with Kevin Spacey’s sexual assault allegations and subsequent removal from the show taking place right as the #metoo movement began to gain traction in Hollywood. It was almost a given that they would tackle this issue. And while it is interesting, I don’t think it’s enough to convince me to watch the show again. I’m rooting for Robin Wright though.

Brynn: I am all in for this plot, but something about the trailer felt slightly off to me. It sort of felt like it was building up to something, but it never got there. I think the problem might be that the big plot twist is that the president is a woman (how revolutionary), and the producers, who are almost all men, did not know how to effectively make that the centerpiece of the season. Don’t get me wrong, I love to see a dynamic, evil woman in a position of power, but I just feel like the producers didn’t know how to make women’s issues the center of a show that is about such a male-dominated space. And to spice it up, there’s some weird undercurrent of a murder mystery underneath what has the potential to be a great season if it just focuses on sexism in politics alone. That said, I am entirely here for this. I got chills when Claire said, “They are trying to strip me of my constitutional power as your Commander in Chief.” It was a breath of fresh air to hear that coming from a woman. I’ll put up with any loose plot ends and anti-climactic scenes if I get to hear more of that.

Danielle: There’s nothing better than a show that knows when it’s time to end. Too many quality shows have gone on one or two (or, like, five if you’re The Walking Dead) more seasons than they needed to, and their reputations suffered for it. I was really skeptical about the taste House of Cards would leave in people’s mouths after the Kevin Spacey controversy, but this trailer is brimming with enough pantsuit-clad Robin Wright badassery to quell any doubts that this final season will perfectly conclude the show’s arc. Rather than end the series and let another disgusting man take an opportunity away from a deserving woman, the writers have wisely decided to kill off Spacey’s character and let Claire Underwood take center stage — something viewers had been eagerly awaiting even before Spacey’s firing. This doesn’t mean the show is tiptoeing around his absence, though. The trailer drudges up some demons from the late president’s past, while illuminating the difficult future that awaits Claire and introducing some intriguing new characters played by Greg Kinnear, Diane Lane, and a handful of my other favorite white, middle-aged actors. Though Claire is certainly no saint, it’s impossible not to root for her as we watch her critics and political rivals underestimate her. Wright consistently elevates this deliciously entertaining show, and I’m confident she will once more bring her no-bullshit attitude to Claire as she goes out anything but quietly.

Dajour:  The most hilarious thing about this trailer was that it said John Travolta’s name but literally no one else’s. That should speak for itself. One of the blonde girls, who I assume Travolta’s character has sex with, looked like Anna Faris for a quick second and I was like “Anna no…your career has not sunk this low yet”, but I don’t think it was her. I don’t know what I’m supposed to say about this movie, it looks like absolute schlock. Travolta is giving the hammiest of all hammy performances, everyone surrounding him is doing the same, the plot looks…stupid. I have no intelligent words to describe this. I have zero desire to see this unless it is 2 am and me and my roommates are trying to laugh at a terrible movie. Lord knows I would not go to a theater to watch a John Travolta sex scene with a young, incredibly attractive and out of his league woman. Hard pass.

Brynn: I am 100% sure that I am not part of the demographic being targeted by this movie trailer. I can honestly say that as a woman, there is no part of me that would be comfortable sitting in a theater—or literally anywhere at any time—and watching this movie. From the start, it’s clear that the plot is going to be about a white man thriving in a white man’s world, but at least there’s some hint of a quasi-interesting storyline about a drug ring. But that’s just a front. In a series of phrases flashed upon the screen during the trailer, the first one is “Live for Sex.” Money, power, and speed are all secondary to the movie’s focal point: John Travolta’s sex drive. The producers took a true story with potential to be very interesting and just completely squandered it to try and fit it into some action thriller bro flick. Next time, make the true story into a documentary, there’s at least a chance I’d watch that.

Danielle: Remember all that time you spent wondering what John Travolta would do after Gotti? Me neither. If you’re lucky enough not to know about Gotti, it’s a biographical crime drama following the rise of a real-life mobster. Oh, and it’s one of the few films to score a rare 0% approval rating on Rotten Tomatoes. And now, with Speed Kills, it appears that Travolta’s next move is to make a biographical crime drama following the rise of a real-life mobster. Naturally. Travolta has been synonymous with ridiculousness since always, and Speed Kills (I can’t even type the title without cringing) looks like no exception. I don’t know anything about the real guy the movie is based on, but I feel like I’ve seen this a million times already (as early as last year’s bland Tom Cruise endeavor, American Made). I’d bet all the Rolexes in the world that things don’t end well for our self-made speedboat racing champion, and that he falls in too deep with the seductive excesses of his double life as a drug-runner—but not before having some thrilling run-ins with cartels and some wild nights with blonde, faceless women forty years his junior. I couldn’t be more uninterested by this. Not even the prospect of watching this purely to make fun of it excites me. At one point in the trailer, Travolta says, with the conviction of someone who also doesn’t want to see this movie, that he doesn’t owe anybody anything. Yes, you do, John. You owe me the chunk of my life that it’s taken to come up with anything coherent to say about this film — which was a much longer chunk than it should’ve been.

Dajour:  This movie looks adorable, but this trailer did not keep my attention. I had to watch it a few times to actually understand what the film was about. Sarah Jessica Parker is playing a singer who gets some sort of diagnosis from the hospital, I guess? I don’t know where Common’s character fits into that, but I love Common and want to support anything he’s in, for the culture (“I’m rooting for everybody black” — Issa Rae). If I’m being honest though, it looks like a sweet enough movie but I just wasn’t hooked. At least the Speed Kills trailer made me laugh with just how ridiculous it was. And the House of Cards trailer had the intrigue of all of the behind the scenes drama to keep me invested. This trailer was cute, and it’s nice to see Sarah Jessica Parker in a movie again, but it was so boring. And I’d rather see a horrible movie than a boring movie.

Brynn: This reminded me of a cheesy Lifetime movie, and I really just don’t have any desire to see it. The trailer was slow and unoriginal, much like I imagine the movie itself is. I hardly even have any feelings about the trailer because although I felt sad for the main character, I really just didn’t feel anything else. There were very few lines that were gripping and left me thinking, “Wow, I want to know more about the context of that phrase.” It was just kind of nothing. Even the title is bland. If you search “Here and Now IMDb” in Google, it’s not even in the top 3 links, all of which are different shows and movies called Here and Now. I feel like the fact that Sarah Jessica Parker’s character is in the world of show business could add some glamor to the film, but otherwise, it just seems like a movie that would end on some weird, sad, and confusing note that makes no sense.

Danielle: Despite what Hollywood may have you believe, women do indeed continue to exist beyond the age of say, thirty. It’s refreshing to see the story of a slightly older woman at a lull in her career who, after what the trailer implies is a serious medical diagnosis, decides to both face her mortality and reinvent herself by reconnecting with the people in her life. The message that it’s never too late to start over is, of course, heartwarming. And subject matter that deals with terminal illness can certainly be powerful. But the problem with the Here and Now trailer is that it has all of these compelling elements but the end result seems pretty boring. The cast looks strong, but I’m not sure star power will be enough for the film to transcend the tear-jerker mold that it will likely fall into. I’m somewhat interested in seeing Sarah Jessica Parker in a darker, more dramatic role, but I can’t see this film being anything more than something I’ll watch (and probably cry at, but that doesn’t take much with me) when it’s on cable in a few years.

Case Against the Classics: Forrest Gump