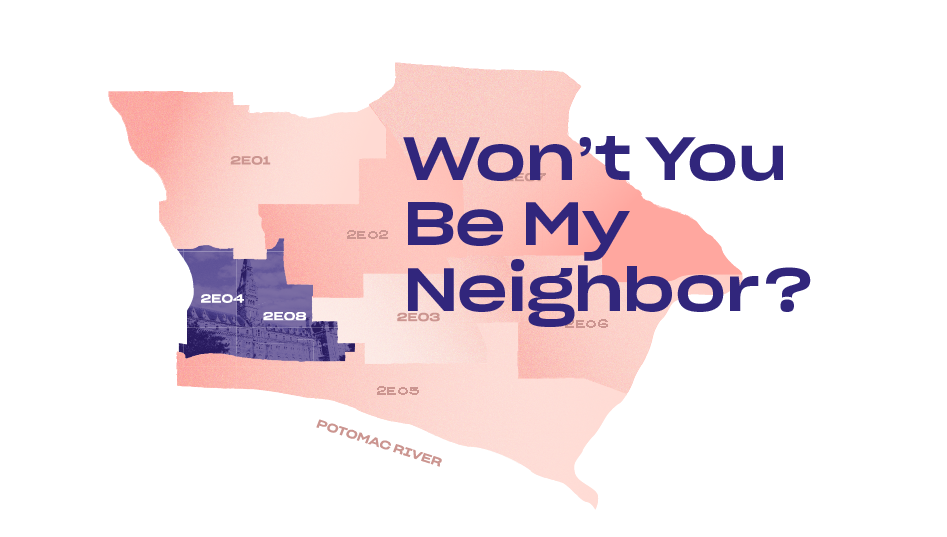 Every other year on Election Day, two Hoyas land jobs their classmates probably did not even know they could get. They win spots on the Advisory Neighborhood Commission (ANC) 2E, which comprises Georgetown, Burleith, and Hillandale.

This is not the D.C. Council. It is not GUSA. Washington, D.C. is divided into eight wards, each of which elects a member of the Council. Each ward is further divided into ANCs. Across the District, there are 40 of these commissions that serve as go-betweens for the city and its neighborhoods.

Issues like zoning, dockless bikes, liquor licenses, and accessibility are the domain of the ANCs. ANC 2E, unlike most other ANCs, also deals with university-related issues, like off-campus housing and student transportation. The body can propose legislation to the D.C. Council and can demand a response, if not specific action, from city departments. The ANC’s opinions and proposals are supposed to be given “great weight,” according to D.C. law.

The ANC covering Georgetown is composed of eight Single Member Districts, each of which elects a commissioner for a two-year term. Two of those districts are made up entirely of students. The fourth district, which Anna Landre (SFS ’21) is running for, covers the north side of campus. The eighth, which Matias Burdman (COL ’21) is running for, covers the south, along with a few blocks outside the front gates.

Unfortunately for those with a hankering for some student body electoral drama, the upcoming ANC election will disappoint. Landre will be on the ballot in an uncontested race. Burdman, despite being a write-in candidate, has no obvious competition. Their predecessors, who are seniors and not running for reelection, have endorsed the two.

Landre almost went to George Washington University, but Georgetown’s admitted students weekend convinced her otherwise. Still, others were skeptical of her choice. “As someone with a disability who interacts with others in the disability community, when I told people I was going to Georgetown, they were like, ‘Are you sure?’” Landre said.

Landre uses a wheelchair, so Georgetown’s hills and historic buildings can impede her daily life.

When Landre started at Georgetown, she committed herself to advocating for on-campus accessibility. This year, she is the chair of GUSA’s accessibility policy group. “I think that’s an issue that’s very big for Georgetown. We’re a historic area, which is wonderful in so many ways,” she said. “But it’s going to become a problem—it’s already a problem.”

Part of her advocacy work involves attending meetings on campus about the university’s plans for campus and its facilities. Those meetings, Landre said, inspired her to run for the ANC.

For Landre, the ANC is a way to make sure that everyone can enjoy Georgetown—the university and the neighborhood. Landre’s hopes for the ANC go well beyond infrastructure. She listed several separate problems she wants the ANC to work on, including long-term public transit, accessibility, and public safety. Some issues might put students at odds with their neighbors.

“Students like to party, but maybe the residents don’t like how we party, and things like that,” Landre said. “But there’s also a lot of potential for us to identify problem areas that we both see—like maybe transportation, maybe it’s the state of sidewalks, maybe it’s having certain businesses here and certain businesses not here.”

At the same time, Landre said, ANC representatives have an obligation to fight for their constituents’ interests.

“It’s OK to be a little conflictual,” she added. “The good news is that from everything I’ve heard … in the past few years, the relationship with other residents on the ANC has been a really good one.”

Landre said that those relationships will be at the core of her work on the ANC, just as her relationships on campus have been central to her work on the GUSA accessibility team. Landre, who will keep her position in GUSA for the rest of the academic year, said that by combining those connections, she will be able to get more done for her constituents.

“Say an issue with neighborhood safety comes up that’s going to specifically affect campus,” she said. “I’m thinking, ‘Who can I go talk to in university administration to make sure that our interests are aligned?’” For Landre, the ANC is not political. It’s about solutions to problems.

“I don’t see myself ever getting very partisan on ANC issues,” she said. “The fact that this is so local means that the egos aren’t as big, things are not as flashy, and that’s part of what I love about local government.”

Matias Burdman went to high school in Sao Paulo, Brazil. His school sent him and some of his classmates to interview Brazilians and report on what they found, and as a part of the project, he spent a year interviewing Brazilian politicians.

“I got to go to Congress in Brazil to speak to influential politicians and just see how much of a difference they could make if they chose to and also to see how some of them weren’t doing that,” Burdman said.

Those kinds of social and political issues, Burdman said, have been apparent to him since he was a child.

“Ever since I’m little, I see the differences between the U.S. and Brazil,” Burdman said. “I think, wow, why are things one way in Brazil and why is it completely different in the U.S.? Why is it that some people are so well off and some people aren’t? And what can we do to make a difference?”

Burdman saw Georgetown as the best place to search for those answers. Its proximity to the Capitol and decision-makers was one of the primary reasons he settled on Georgetown, Burdman said.

But the ANC’s office, which is in a low-slung building off Wisconsin Avenue, does not resemble the Capitol. It is not big enough to host the ANC’s meetings, which they hold monthly at Georgetown Visitation Preparatory School, adjacent to the university’s campus. Yet, the unpaid, unglamorous position he hopes to assume in January still excites Burdman.

But what it lacks in scope, Burdman explained, the ANC makes up for with personal touch. “It really is grassroots, like bottom level up, democracy. And you can just see it in that you have residents talking to their representatives and just telling them what they want.”

Burdman emphasized conversation with constituents and other commissioners as an essential part of the job of representing Georgetown students.

“That’s where my allegiance lies, first and foremost,” he said. “What I’m trying to do in the ANC is I’m trying to present what’s best for the students while at the same time trying to keep in mind the interests of the neighbors and trying to understand their perspectives.”

Asked what he wanted to accomplish on the ANC, Burdman did not focus on particular policy goals. Instead, he talked about the importance of relationships—with his fellow commissioners and students, along with neighbors, nearby businesses, and the D.C. government.

Student commissioners have not always had smooth relationships with their fellow commissioners. Controversy over the university’s 2010 campus plan, the university’s proposal for land use, housing, and enrollment, among many other topics, produced months of administrative delays and drawn-out negotiations. ANC 2E and another nearby ANC, along with other local interest groups, opposed the original 2010 plan over concerns surrounding off-campus student housing.

surrounding off-campus student housing. In the end, the parties agreed to a temporary measure so they could come to an agreement on a longer-term plan. To facilitate a new agreement, the university funded the new Georgetown Community Partnership (GCP), which includes representatives from all the stakeholder organizations in the neighborhood. The GCP is supposed to focus on consensus building in an effort to avoid unnecessary conflict. Ultimately, they found consensus, and the 2017 plan, in effect now until 2036, won unanimous approval from the ANC and the GCP.

Zac Schroepfer (MSB ’19), an outgoing member of the ANC, said that his relationship with the rest of the body is strong, and he credited that strength in part to the GCP. Burdman said he wants to keep it that way. “Things are going great now. The university, and students, and the community are always on the same page,” Burdman said. “We completely agree on pretty much everything.”

Burdman described the ANC as a way to reach agreements, even when students disagree with other Georgetown residents, or when the university wants to expand and neighbors object. “If you think about it, there isn’t even much that we could do that’s good for us that’s bad for them,” Burdman said, referring to Georgetown residents.

Since 1996, when Georgetown students first sat on the local ANC, student representatives have looked for ways to make change for students. Landre and Burdman have done the same since they arrived on campus. Landre worked to improve accessibility on campus; Burdman joined a Center for Social Justice tutoring program. They both see the ANC as a way to continue their work.

“It’s still a way to get involved with the people around you in a way in which you can make some sort of difference,” Burdman said. “I’d say that’s the main reason I’m there. I mean, you’ve got to start somewhere.”