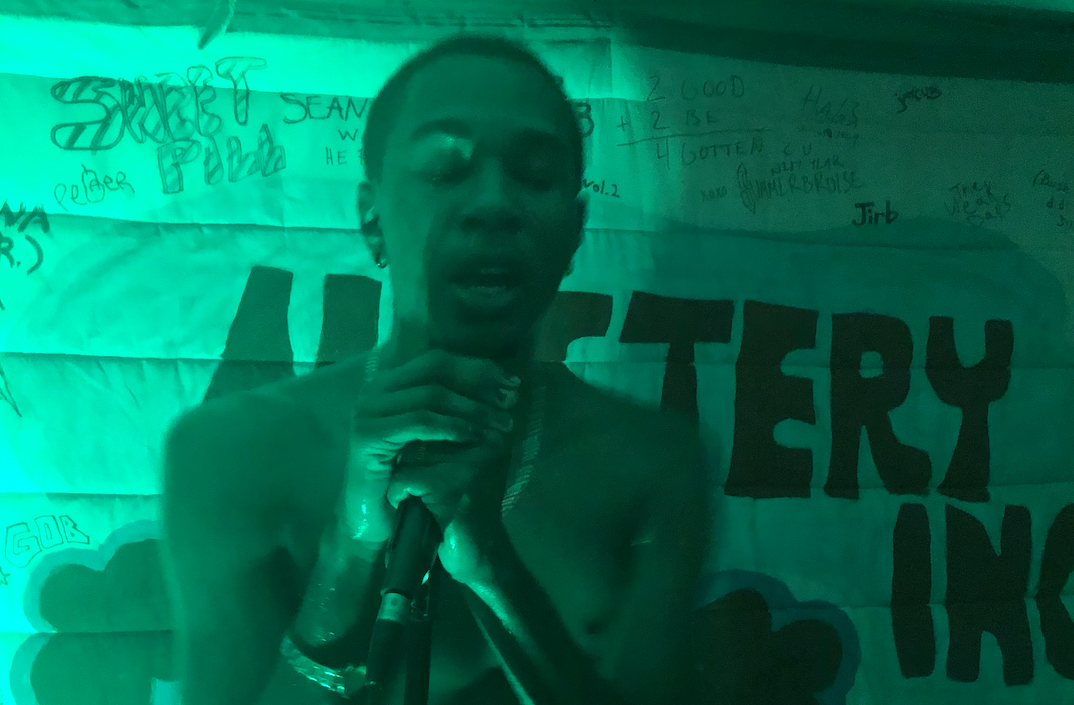 On Sunday, September 22nd, Jabari Butler (MSB ‘22) debuted his first album, Dirty Skin, at Mystery Inc, an underground music venue right by campus. The sweaty, intimate atmosphere of the basement was the ideal space to perform such a personal album. Butler’s album consists of ten songs and an intro. His show was executed with high-energy, great enthusiasm, and insightful explanations about the songs. Butler’s words especially drew the crowd into an even more intimate setting, where we got a glimpse into the creative process of Dirty Skin. Although Butler’s music needs to deviate farther away from his inspirations (like Kanye West and Tyler, the Creator) to achieve a unique voice, his album is still an impressive first set, showcasing a knack for good beats and honest lyrics.

Unfortunately, the actual performance of the album was somewhat lost in the messiness of the night, and maybe the sound system, so that the recorded version of Dirty Skin is much clearer and therefore easier to appreciate. That said, the live energy of Butler, the crowd, and the venue is irreplaceable. Something about sweat really bonds a crowd.

“I’ve dealt with dirty skin for a very long time,” Butler explained about the album’s conception and title. “It kind of capsulated something that I’ve been dealing with for a long time that was a struggle towards self-love. I feel like we can all kind of resonate. ‘Cause I think the main point of this album is that: it’s not that I don’t have dirty skin, but that I do have dirty skin and I can still love myself with it.”

Before Butler, Maxim Krukov (COL ‘22), the pre-show DJ, psyched up the crowd with an amazing aptitude to completely understand people’s musical needs. No one could resist getting down on the dance floor with “Blue Monday” or “Dance Wiv Me” playing. Following Krukov, Kian Blewett (SFS ‘22) performed some of his own songs. Blewett’s music was a fitting precursor to Butler’s Dirty Skin, with a style that set the scene for Butler.

Jabari Butler makes, produces, sings, raps, writes, and mixes music, all of which he showcases in Dirty Skin. He uses mumbly speech as his primary vocals, but it works well in the lo-fi musical era that we are in today. Some highlights include the drums and powerful climax of “Bad Home” about two minutes in. “Breakdown” is a short song that is more electronic and upbeat than “Bad Home,” with an almost video game-like backdrop that works the instrumental ending well. Like “Breakdown,” the album’s strongest titles don’t subscribe to a simple circuitous rhythm but have different sections, so that the songs end up in different places than where they began.

“Thinkin’ Bout Mua?” and “When He Cries” are some of the songs that stand out the most with their skill and complexity. The latter especially unfolds well, and the lively section approaching minute three capitalizes on the previously mellow mood to shake up the song. Overall, Dirty Skin vibrates positive thoughts, punctuated especially with the upbeat closing song “To Rest.” “This is the first music I’m making that’s saying I’m going to be an artist,” said Butler. “This kind of encapsulates all the training and all the producing that I’ve been doing since 14.” It’s impressive to have done so much by himself so early on, and while Butler still has more music-making to learn, that is the magic of it.