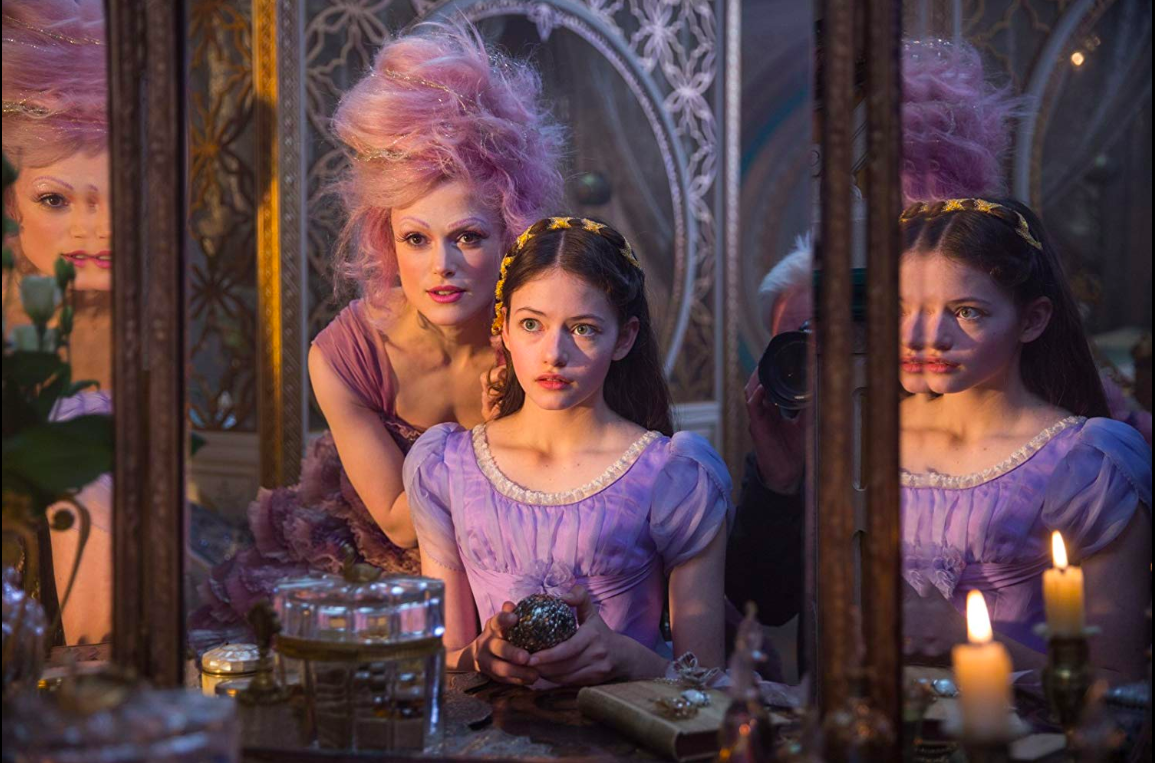 Disney’s latest movie, The Nutcracker and the Four Realms, takes an old holiday classic in a whole new direction. Following Clara Stalhbaun (Mackenzie Foy) on her quest to find a way to open her mother’s Christmas present, she travels to a colorful new world with four unique realms. To save the world from chaos and learn more about her mother, Clara sets out to defeat the evil Mother Ginger (Helen Mirren) and retrieve the key that will both reveal her mother’s message and save the realms. Throughout the movie, Clara struggles to accept the loss of her mother and her anger at her father for trying to carry on as if nothing has changed. With the new people she meets and the challenges she faces, Clara learns important lessons about love, loss, and family.

The Nutcracker and the Four Realms is completely different from its predecessors, with a brand new action based storyline that only loosely references the more well-known play. Though it was necessary to create a new story in order to allow the movie to stand on its own, the lack of resemblance is disappointing. Viewers are introduced to four colorful realms that make up the world Clara’s mother created: the Realm of Candy, the Realm of Flowers, the Realm of Snowflakes, and the Fourth Realm, formally called the Realm of Amusement. Clara’s mother, Marie Stalhbaum, is revealed to be the queen of this land as well as its creator. With Marie gone, the citizens turn to Clara to save them from the mysterious threat of Mother Ginger, regent of the Fourth Realm. The world is more like Candy Land or Narnia than the Nutcracker and was not a particularly original concept. However, this did not necessarily take away from the movie as a whole.

Audiences would be right to suspect that the movie differs from the original story of the Nutcracker, but the biggest shock may be how directors Lasse Hallström and Joe Johnston strongly reduced the role of the Nutcracker from which both Hoffman’s play and Disney’s movie get their name. The Nutcracker has been replaced by a strange mechanical egg that cannot be opened without a very special key, and most of the plotline is geared towards getting this special key. Only briefly referenced in the human world, the Nutcracker is reduced to a dorky guard named Phillip (Jayden Fowora-Knight). Though viewers will appreciate the attempt to make the character seem more youthful and enjoy that he was more of a friend than a romantic interest—as is typical in most adaptations—the character was unnecessary and flat. The worst part of any movie is when it’s clear that the actors are acting instead of really embodying a character, and unfortunately, this quality crept into a lot of Fowora-Knight’s lines. For example at the end of the movie, Fowora-Knight delivers a heartfelt message about friendship, however, the delivery seemed stale and rehearsed, which prevented it from conveying any significant emotion. Although they were trying to bring new life to this character, it was poorly executed and could have used more development.

One of the best aspects of the movie is the development of Clara’s character. An avid inventor, Clara is a brilliant girl who is interested in mechanics and science like her late mother. This quality shows itself throughout the movie allowing Clara to accomplish her goals and defeat the evil in the realms. Audiences will enjoy seeing Clara take the lead in most scenes, proving herself to be independent and resourceful. Mackenzie Foy, best known for her role as Renesmee in Twilight Breaking Dawn Part 2, gave a convincing performance as Clara adding depth and individuality to this new take on a classic character.

Keira Knightley’s performance as the Sugar Plum Fairy was just the right balance of crazy and colorful. She was the most developed of the four regents, due to her more significant role. Her character development was an interesting parallel to Clara’s considering their similar issues with the loss of Marie Stalhbaum (Anna Madeley). Both characters felt betrayed by the absence of Marie and struggled to return to their normal lives following the loss. Sugar Plum serves to show Clara the dangers of letting grief control her life. Although her role in the movie was predictable, Knightly’s dramatic performance makes up for the rather straightforward sequence of actions.

It was developed well with beautiful visuals and costume design. Oscar award-winning costume designer Jenny Beavan combines historical dress with fantasy to create beautifully colorful and unique costumes. The outfits for the characters of the different realms feature elements seen in everyday life, such as flowers, snowflakes, and candy, in order to create a coherent visual that emphasizes the nature of this world. Each of Clara’s ensembles throughout the film is uniquely stunning, and befitting of her age and personality. Color is a very important element not only in the realms but also in the human world. Creating a lively atmosphere at the Christmas party a variety of brilliant colors are seen in the dresses and decor as well as the strings for the children’s presents, one of which leads Clara to her mother’s secret world. Despite having four realms, the film focuses on the castle and the Fourth Realm, with only brief flashes of the other realms during their introduction. This tactic allows for the main settings to be fully developed without overcomplicating the story. Using ballet to tell the history of the realms and introduce the enemy was a creative nod to the original ballet by E.T.A. Hoffman and an effective use of screen time. However, it was surprising not to hear much of Tchaikovsky’s original music. Including more of his work could have connected the show and the movie more effectively, without taking away from Disney’s new plot, as the music is one of the most memorable parts of the ballet, particularly the iconic “Dance of the Sugar Plum Fairy.”

The plot and message of The Nutcracker and the Four Realms are rather predictable and cliche—nothing at the end of the movie is surprising—but the experience is enjoyable nonetheless. The movie is relatively short with a total running time of one hour and forty minutes, and there were certain plot lines that could have been further developed, such as the history of the Nutcracker, the character of Clara’s mother Marie, and the nature of this world created from toys. As some of these themes were not fully explained, there are disconnects in the logic related to the world, particularly the animation of the toys using Marie Stalhbaum’s machine. However, had the movie been much longer, it would have lost the audience’s attention. The choice to limit the story’s length allows for this simplicity to seem short and sweet without reaching boring and redundant.

This film tells the story of love and loss in a colorful setting with fantastical characters and beautiful visuals. Through a narrative of a world in peril, the movie portrays a young girl in her struggle to overcome her grief and sorrow. By combining this topic with a magical world, it allows the message to come across as hopeful instead of heavy-handed and dim. Taken out of context, Clara’s actions towards those around her can seem childish and bratty; however, lashing out is realistic for a child who has just lost her mother. Surrounded by her mother’s creations and thrust into a role she is not prepared for, Clara has to learn some difficult lessons rather quickly. This message and the resulting character development are one of the strongest parts of the movie because they stand on their own apart from the holiday classic and can apply to anyone watching.

Initial reviews of this movie are not overwhelmingly positive. However, once viewers accept that this is a movie for children and let go of any preconceptions of what the story should be like, it can be a fun watch. Although the simplistic story does not encourage one to rewatch the movie, for younger children it is worth seeing at least once. The Nutcracker and the Four Realms is not The Nutcracker that most people know—it is hardly even a retelling. Including only a few elements that relate to the original plot, Disney’s latest movie is a new story riding on the pretense of an old favorite. Though on its own the movie has some interesting qualities, The Nutcracker and the Four Realms isn’t quite what anyone has been anticipating.