The first Hoya Roundtable of the 2018-19 academic year met to discuss the rate-setting of tuition on Nov. 5. The event, co-sponsored by the Office of the Provost, GUSA and GradGov, looked in-depth at the university’s finances and their rationale behind the current tuition and projected increases that have yet to be finalized.

Provost Robert Groves and Geoff Chatas, senior vice president and chief operating officer, presented and answered questions for nearly an hour in front of administrators and a handful of students, in the hopes of ensuring transparency in how the university puts students’ tuition to use.

Groves and Chatas noted that the university relies heavily on tuition. Nearly half of Georgetown’s revenue comes from student tuition, while only 14 percent comes from its donor base. As of 2016, Georgetown’s endowment of $1.66 billion was ranked 61st in the country — the lowest among the US News and World Report top 20 schools in the nation.

“To give you a sense of perspective, if you look at the rest of our peer group in terms of institutions of our size and within the top 20 institutions in the country, that number is more in the 30-50% range of those institutions,” Chatas said. “Although we are catching up, that number provides certainly a large gap.”

Groves also discussed Georgetown’s mistaken deficit predictions. During this past fiscal year, Georgetown’s deficit was $20 million, nearly $12 million above what was budgeted for. The causes ranged from lower than expected revenue from tuition, higher spending on compensation, and accounting problems in terms of booking revenue which affected $3-5 million. Groves acknowledged the mistakes and pledged to improve in the future. “Going forward, we are totally focused on getting better estimates about our expenditures and our revenue,” Groves said.

Chatas addressed questions on mental health expenses, acknowledging that the university has increased their focus on this area. He said he expected the university to increase spending on these services in the coming years.

The presentation additionally said that the university’s planned construction projects will likely affect expenditures, and in turn affect tuition. These include repairing the roof of Yates and renovating Kehoe Field, which is projected to be completed by the fall semester of 2019, and investing in Cooper and Shaw field, the Village C Black Box, the GUTS bus turn around, Walsh Arts Gallery, the Health Center, and the Muslim prayer room. All of these improvements cost millions of dollars and require larger segments of the budget and affect the rate-setting of tuition.

There are also upcoming projects which will require  larger budget considerations. The largest is the proposed renovation of Henle Village, which would be a $130 million investment. Moving forward, Groves and Chatas also referenced upcoming projects dealing with Lauinger Library renovations and a Graduate Student Career Center.

Karan Chauhan (SFS ’22), a GUSA senator, said he thought the event was informative and comprehensive, but may not have gotten the publicity it deserved. “I wish it was more widely attended by students,” Chauhan said. “I felt like it was mostly GUSA, and this affects all of us.”

Groves concluded by reiterating the responsibility that Georgetown has towards its students. “Our job is to balance all of our desires to be a better university and to give you more services and better programs, with our ability to finance those activities,” Groves said.  “It’s a never-ending juggle.” 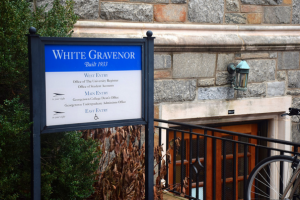