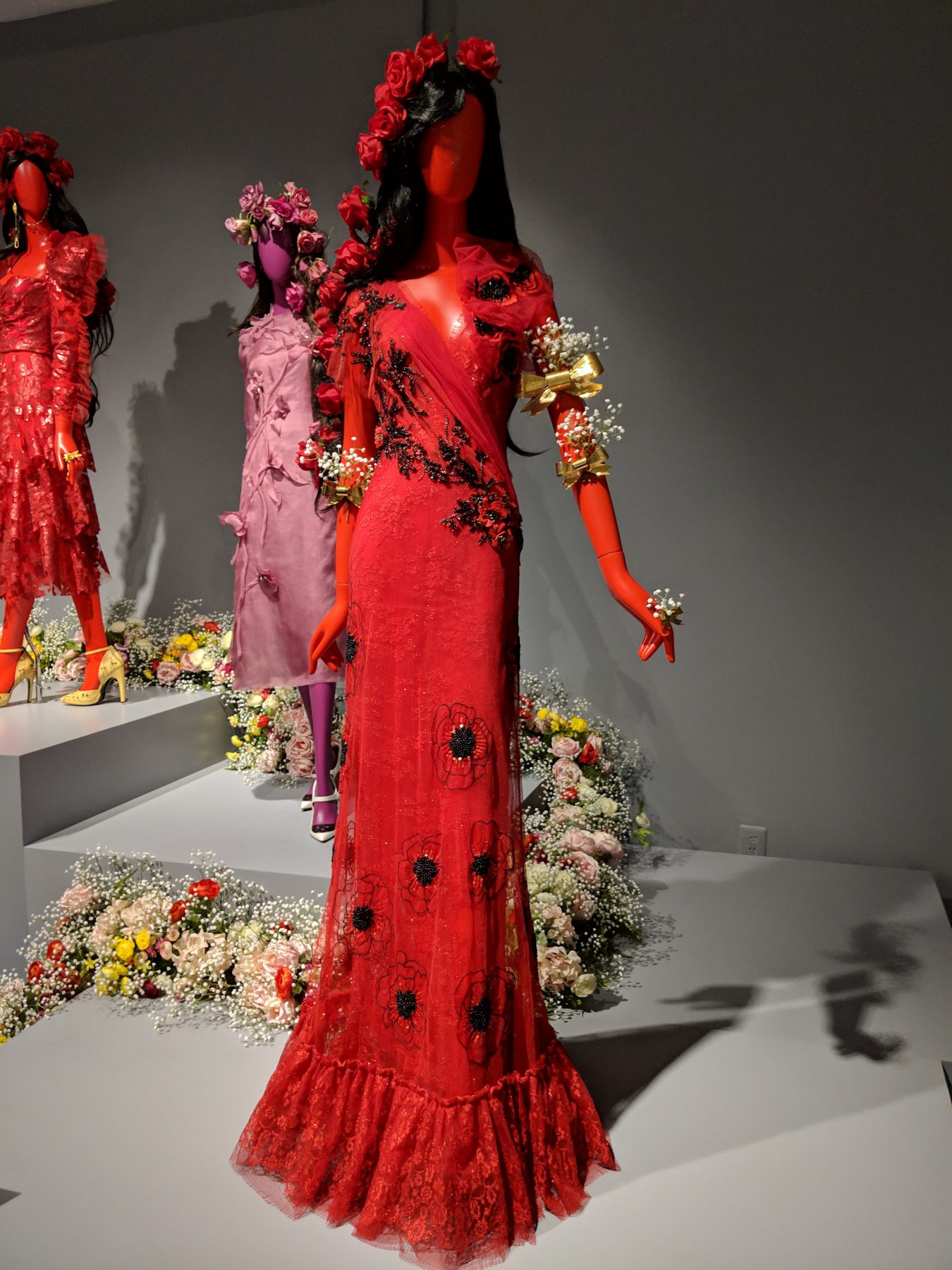 Rodarte’s place in the National Museum of Women in the Arts is fitting; women started the fashion company of the same name, and its designs are for women. The exhibit showcases pieces from the company’s inception through its 2018 Spring/Summer collection. Founded by Kate and Laura Mulleavy in 2005, Rodarte featured its first collection in New York just weeks after finishing its design. Since then, the sisters have exploded in popularity, making friends with celebrities like Kirsten Dunst and dabbling in film. Their design philosophy ties in elements from their girlhood, purposefully feminine and childlike, curating collections that water a secret garden, hidden away from the male gaze. The exhibit is linear, featuring seven rooms, each with a distinct purpose and theme. The dresses on display are thoughtful and joyous with a composition of rich dyes and natural materials. While parts of the exhibit struggle with thematic cohesion, the sum of the gleeful design techniques of the Mulleavy sisters proves to be greater than the individual parts.

It is only after one finishes Rodarte that it becomes obvious that the first room is not meant to be cohesive, but rather to serve as an introduction to the Mulleavy vocabulary of design. Rodarte’s seasonal collections are normally driven by narratives plucked from childlike imagination and hazy recollections. In the first room, however, there are designs from multiple different years’ collections and as a result, there are many ideas present. The center is a runway for three hand-dyed silk gowns, and the two adjacent sides showcase mixed-material dresses. The walls are lined ceiling to wall with mirrors, extending the room infinitely. While the gowns are eye-catching, the intricacies of the mixed dresses are even more mesmerizing. Some of the dresses have no care for human shape, made of leather slats stitched together with crocheted wool and smatterings of jewels. These more formless dresses are juxtaposed with the highly elegant, constrictive dresses directly next to them. This variation of design techniques seems at odds with the runway in the center. On the islands along the sides of the room, the contrast between traditional silk and leather with the abstracted use of the same natural materials for the other dresses, is hard to tear your eyes away from.

Directly ahead of the first room is a small display featuring six dresses from Woodshock (2017), the Mulleavys’ debut film. The dresses hang from the ceiling in two rows, the small room they are held in made smaller by the platform underneath that provides descriptions. The pieces come in two sets, one white and one black. Each set begins with one immaculate dress, and  subsequent pieces show the same dress slowly disintegrating through multiple recursions. In the film, the dresses are intended to symbolize the main character’s slipping grip on reality, her descent into madness mirrored by her unravelling dresses. On screen this metaphor may have been subtle, but in a vacuum, the effect is so obvious that much of its intended impact is sapped. The design of the room does not allow the viewer to get close enough to appreciate the particularities of each dress, causing them to blend together as sets and again diluting their effect as individuals. While the Woodshock display may be underwhelming, it helps illustrate the way in which the Mulleavy sisters challenge the distinction between clothing and the person wearing it.

This theme is picked up in the next room, aptly-titled “Magical Beautiful Horror.” LED lighting adds to the space’s supernatural air, like midnight in a woodland meadow. The dresses are displayed on a circular platform in the center of the room, suggesting a continuity between each piece present. The contrast of knit-wear with unconventional materials returns; a pair of dresses, one a naturalistic brown and green, the other a mildly demonic black and red, are a combination of decaying knit wear with spiked Louboutin’s. Mirrors in the center of the room expose the backs of the dresses and the faces of the viewers. The highlight of this room is a set of dresses, silken and flowy like those from the first room. Each one boasts a white base, and every successive dress features more scarlet dye than the last, like the same model is trying on each dress and bleeding out while she hurriedly finishes her photoshoot. The eerie effect is simple and successful. The dress becomes an extension of the mannequin, the line between the two made murky.

The disintegration of that dichotomy coincides with one of the other major themes of the collections: the body as a medium to reflect gossamer, childhood memories. The fifth room is designed around the Mulleavys’ preoccupation with their childhood home in Northern California. The dresses don’t inherently belong in the same room. They all stand next to each other, but only creativity holds them together. Some evoke images of mermaids, fine China, or waves of grain. This playful imagery is true of the exhibition as a whole. These are not terribly serious pieces to be worn by terribly serious people; they are purposefully silly and joyous. In a another room, Star Wars-print skirts are paired with Swarovski-encrusted smocks; sock hop costumes feature a Starry Night print; a mannequin wearing a light-blue overcoat is reminiscent of a deconstructed Jackie O. The dresses pose in front of pleated grey curtains, seemingly pulled from a mid-60s beauty contest. The mixing of high- and low-brow fashion can be challenging, some of the digital prints on their own teeter toward kitsch. But altogether, the space is a rewarding exploration of costume—silk and embroidery transform a model from a person to a walking teapot.

The exhibition ends in a metaphorical garden. In the largest collection, the dresses adorn mannequins frozen in motion, elevated several feet above the ground, leading the viewer to ogle upwards at their many-colored bodies. Deep violets, sparkling yellows, hot pinks, and fierce scarlets emanate from the different dresses in this room, the brightest of the collection. The well-lit room causes the mannequins to cast larger-than-life shadows against the walls. Wreaths of flowers hang on the heads of the mannequins, their arms laced with shawls of branches. In this last room, dresses are used to rejoin the body with nature. With this end, the designers end their commentary on clothing and its wearer, concluding that the clothing acts as a door between the world and the person. Likewise, they finish the exploration of their childhood imaginations, returning to the forests of play in dresses replete with the joy and wonder of their other collections.

Finally, the viewer has to turn around, walk back through each room of collections, and leave through the doors from which they came. The experience is like a silken version of Hansel and Gretel; the dark forest lightens as you pick the breadcrumbs back up. The initial journey through each room seems to provide a contradictory lens from which to understand the sisters’ work, with turns in style and theme that can be frustrating and disorienting, like a darkening wood. Moving back through Rodarte reveals the continuity of theme from the Mulleavys, a nostalgia for a girlhood spent outdoors in Northern California reflected onto their pieces. The viewer picks up the breadcrumb design hints that the curator sprinkled along the path. There is a sense of relief, a jubiliance in the final room. It smells like flowers. Reaching the garden at the end, the atmosphere changes and, suddenly, the journey through Rodarte seems clear. 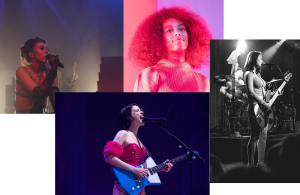