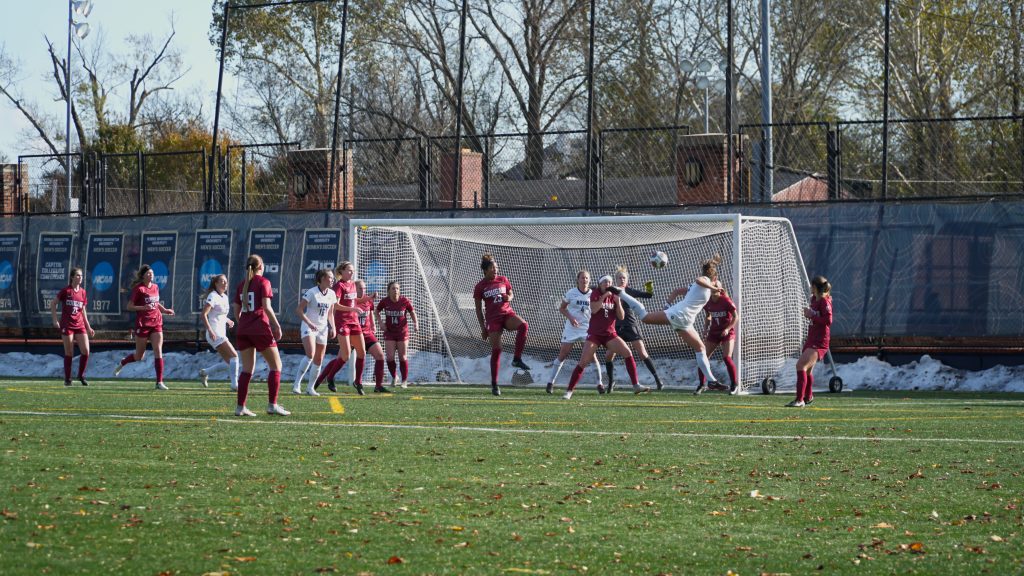 The No. 2 Georgetown women’s soccer team (19-0-3, 8-0-1 Big East) advances to the Sweet 16 of the NCAA Tournament after a 1-0 win over Washington State (13-6-1, 5-5-1 Pac-12) at George Washington’s Mount Vernon campus with Shaw Field declared unplayable after the conditions throughout the week. Junior defender Meaghan Nally scored the only goal of the match to put the Hoyas through to the next round.

The Hoyas immediately took the game to the Cougars and found their first shot five minutes in, as Nally fired high. Five minutes later, sophomore midfielder Grace Nguyen whipped a ball in from a corner, and Nally got across her defender at the front post for a glancing header past redshirt junior goalkeeper Rachel Thompson, with graduate student Kyra Carusa blocking the goalkeeper’s vision.

The Hoyas nearly doubled their lead on 16 minutes when Nguyen had an opportunity from six yards out, but she couldn’t keep her volley down, and the Cougars were off the hook. Georgetown kept the pressure up, with Carusa directing a header on frame in the 23rd minute and Nally firing narrowly over in the 25th, but Washington State eventually grew into the game and forced situations where they could use their height advantage. While senior defender Maddy Haro whipped dangerous balls into the area for the Cougars, the Hoyas were never truly threatened from balls in the air, nullifying one of the Cougars’ biggest advantages.

“Our midfielders did a great job. Everyone in the midfield had about two or three inches on them, five inches above Grace, and Grace was winning these headers like crazy,” Nally said. “That just speaks a lot to their heart.”

While Washington State began pushing, Georgetown continued to create chances on the other end. Senior forward Caitlin Farrell floated a shot over the bar in the 34th minute. Carusa’s shot in the 37th minute flew through Thompson’s fingertips, but luckily for the Cougars, the ball still made it over the crossbar for a corner. Georgetown senior goalkeeper Arielle Schechtman tipped an awkwardly looping header over the crossbar in the 42nd minute before the Hoyas came back down the field and won a free kick in the 44th. Georgetown had the ball in the net at the end of the play, but Thompson was levelled trying to claim the cross, so the goal was waved off.

While the first half ended more evenly than it began, the Hoyas were still on the front foot, with seven shots to the Cougars’ four. However, Schechtman made more saves than Thompson, and Washington State had a 5-2 corner kick advantage.

It was the Cougars that began the second half on top, keeping the Hoyas mostly in their own half for the opening 15 minutes. Junior forward Morgan Weaver had a chance in the 52nd minute, but Schechtman got down well to smother the chance away. Washington State also had a barrage of early corners, but the closest they came was a header into the side netting, and when Georgetown finally came forward, senior forward Amanda Carolan’s shot was saved off the line in the 63rd minute.

“The size they have, the delivery they have, the consistency they had, they ask a lot of questions,” Nolan said of the set piece defense. “Every ball that was there to be won, they didn’t flinch. They went in, and they won their ball.”

Farrell hit the side netting four minutes later, and the Cougars were looking to hit on the counter as the Hoyas searched for an insurance goal. In the 73rd minute, Washington State had a three on two opportunity, but a well timed step forward from sophomore defender Kelly Ann Livingstone put Weaver into an offside position. Weaver, who led the Cougars with 13 goals on the year, had only one shot on the afternoon.

“We knew they had a really dangerous forward up top,” Nally said of Weaver. “Really talented, really fast, great soccer in her, so we always wanted to keep an eye on her.”

Junior forward/midfielder Paula Germino-Watnick drove a left-footed shot into Thompson’s arms in the 77th minute, but the best chance of the half came three minutes later. After some slick build up play from Georgetown, Carusa curled a shot over Thompson’s head, but it hit the bar instead of going into the net. Farrell forced Thompson into a save four minutes later, at which point the Cougars threw everyone forward in the hopes of keeping their season alive, but Georgetown didn’t budge.

Washington State couldn’t get anything to test Schechtman, and the Hoyas held on for a Sweet 16 berth. They will host No. 9 Duke (16-3-2, 8-1-1 ACC), the fourth seed in the region. The Blue Devils beat Lipscomb (15-5-2, 7-1 ASUN) 3-0 earlier in the day, with goals from sophomore forward/midfielder Tess Boade, senior forward Kayla McCoy, and sophomore forward Gabi Brummett. McCoy leads Duke with 12 goals and seven assists on the year, and senior midfielder Taylor Racioppi has pitched in with nine goals. Junior midfielder/forward Ella Stevens, who had all the time in the world against the Lady Bisons, leads the team with 11 assists.

“I like their front group. I think Kayla McCoy in particular, she’s a senior and playing like she’s a senior. Ella Stevens in midfield is a kid that you always have to be aware of, Taylor Racioppi has some good pace and she’s always asking questions of you,” Nolan said of the Blue Devils. “There’s no weak links in that team.”

The Hoyas and Blue Devils met on Shaw Field in August and played out an entertaining 0-0 draw, with Farrell’s shot in the second overtime period cleared off the line. The game was also the first of the season for Germino-Watnick after the she missed out on the opening weekend at Virginia Tech, so she will likely be more of a factor in Sunday’s match.

“In the early part of the season, I think we could have had them,” Nally said. “We could’ve won, but there was a goal line save, so I think we’re all really excited to have another look at them.”

Kickoff is scheduled for 11 a.m. ET on Shaw Field. For live coverage of that match, as well as updates on all of Georgetown’s athletic programs, follow @GUVoiceSports on Twitter.